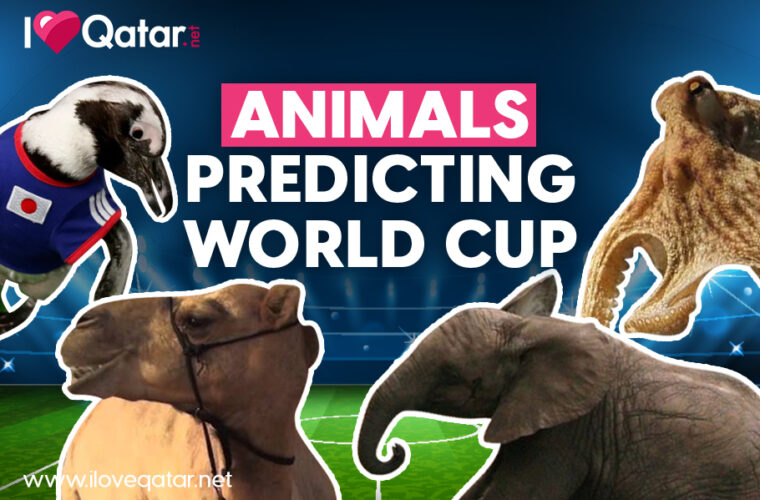 The World Cup is a global celebration where fans all over the world take part in the festivities. The tournament has sparked numerous traditions among fans, some even believing in superstitions.

One of the superstitions that have garnered quite a bit of fame are the ‘oracle animals’, which have attempted to predict World Cup outcomes.

He would predict the winner of the matches by selecting between two clear boxes containing a mollusc treat, each box having the flag of the team competing.

Paul the Octopus, unfortunately, passed away in October 2010, just a few months after the tournament ended. He was buried on the grounds of his home at the Sea Life Center, and a modest shrine was built in his memory.

Nelly the Elephant of the Serengeti Park in Germany also rose to fame with her football skills and ability to predict match outcomes. She would make her predictions by kicking the ball into one of two nets marked with a participating team’s flag.

Another fortune-telling animal was Sijtje the Cow, who predicted the Netherlands’ win over Costa Rica in the 2014 World Cup by choosing to feed on the bucket of food with the Netherlands’ flag.

This was the eliminating match for Costa Rica.

Cabeção, or Big Head, a resident of Praia Do Forte in Brazil, predicted match outcomes of the 2014 World Cup. The first of his predictions was Brazil’s win over Croatia, which was the opening match for the turtle’s home country.

Cabeção would make his predictions by selecting which fish to eat under the participating country’s flags.

Two signs would be placed before him bearing the participating country’s flag. Shaheen would then choose by chewing on the back of the sign of his predicted winner.

A wheel indicating different match outcomes was spun by Aochan using his beak and he predicted a match draw. However, Ivory Coast won with a score of 2-1.

The Archerfish from Japan were also tasked with predicting the outcome of the Japan vs Ivory Coast match of the 2014 World Cup.

The fish were divided evenly into two sides in the tank, each labelled with a corresponding country’s flag. They were then given the same amount of food, and the first group of fish to finish eating would be the predicted winner.

Norman the Armadillo from a local zoo in Muenster, Germany, chose from tournament balls with the participating countries’ logos and predicted Germany to win the opening match against Portugal.

Germany eventually won with a score of 4-0.

A Bengal white tiger named Khan from the Royev Ruchey Zoo in Russia attempted to predict the winner of the Russia vs Algeria match by picking between two soccer balls with the team names on them.

He was patriotic with his choice to play with the Russian-labeled ball; however the match ended with a 1-1 draw.

Ying Mei the Giant Panda from Jiangsu province in China, was presented with three boxes of food decorated with the Brazilian and Croatian flags and a neutral one to represent a draw.

Ying Mei favoured the Brazilian box. Brazil later triumphed with a 3-1 score for the opening match of the 2014 World Cup.

An energetic otter Chippu from the Himeji Central Park in Japan made predictions during the 2014 World Cup by reaching for toy balls with participating countries’ flags.

He was asked to predict the outcome of Japan’s match against Greece and chose the rival team. However, the said match ended with a draw.

She took a sniff right as she landed on the mini football pitch and darted to Switzerland’s side, promptly leaving a single dropping, confirming her predicted winner to be her home country.

She was right as Switzerland won with a score of 2-1.

Zabiyaka the Goat from Samara Zoo, Russia, made her predictions by selecting between bowls of food, branded with two of the teams’ flags and a third indicating ‘draw’.

She has stirred up quite a reputation for her correct predictions. However, when asked to predict who will win the finals, she chose to eat from the bowl labelled with the Belgian flag. France won the World Cup that year.

One of the more recent World Cup predicting animals is Achilles the Cat from Russia, who rose to fame during the 2018 World Cup.

Achilles is a hearing-impaired cat who lives in St. Petersburg's Hermitage Museum. He is one of the estimated 50-70 cats on the museum grounds tasked with catching mice.

Achilles predicted the winner of the matches by choosing which bowl of food to feed on with the country’s flag. He successfully predicted Russia’s win in the World Cup opening match against Saudi Arabia.

4 Arab countries qualified for the 2018 World Cup finals for the first time: Morocco, Tunisia, Saudi Arabia, and Egypt. This prompted another Arab-based animal oracle, Farah the Falcon from the UAE, to predict the match outcomes.

Two wooden flags were presented before her, and she would fly to her predicted winner.

Which one of these talented creatures is your favourite? Let us know in the comments! Do share this article - it keeps us going!