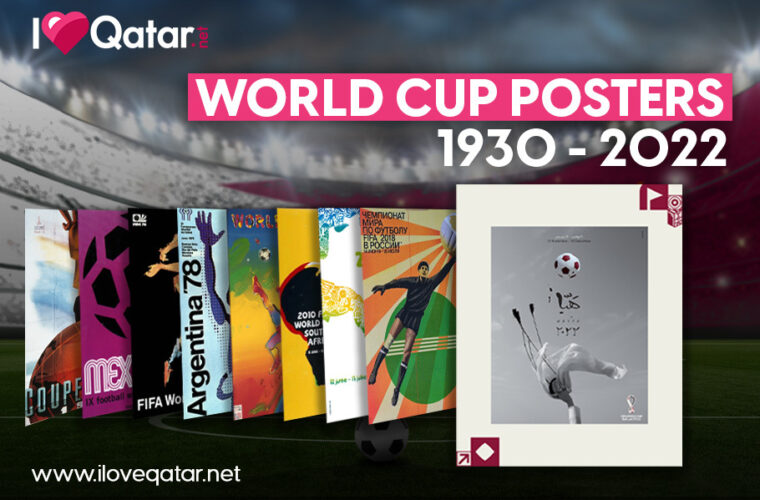 The FIFA World Cup is a global sports phenomenon celebrated worldwide. It is held annually every 4 years by different host countries, each offering its flair and cultural touch to the football tournament.

Each tournament features a themed poster by the host country. In this article, we’ll take you through all the World Cup posters starting from 1930 to 2022.

The first ever FIFA World Cup was hosted by Uruguay, who also won the tournament and were crowned the first FIFA World Cup champions. The poster was designed by Uruguayan painter, sculptor, and designer Guillermo Laborde. The poster depicts a faceless goalkeeper dressed in the signature blue Uruguayan color, catching a ball and a number 1 figure in the design to represent the tournament’s first event.

The second World Cup travelled to Europe and was hosted by Italy in eight cities, where once again, the host city prevailed as champions of the tournament. The poster was designed by Italian artist Gino Boccasile and depicts an Italian player striking the ball with flags of some participating countries in the background.

For its third year, the World Cup was hosted by France. Designed by French artist Henri Desmé, the poster features more vivid colors than its last two counterparts. The illustration shows a player resting his foot on a ball and the ball resting on a globe exactly where France is located. Italy successfully defended its title during the tournament, winning the championship for the second consecutive year.

The World Cup was briefly cancelled due to World War II, which lasted from 1939-1945. The tournament resumed in 1950 and was hosted by Brazil. The poster significantly showcases the participating countries’ flags as the design for the football player’s sock with his foot resting on the ball. Uruguay, who won the first FIFA World Cup, emerged as the champions that year.

The fifth World Cup was held in Switzerland, with Germany winning the tournament for the first time. The poster is reminiscent of the first World Cup poster in 1930 with a goalie as the subject.

Sweden welcomed the world as host for the sixth year of the tournament, and Brazil was crowned as champion. The poster looks a bit more modern with a silhouette of a player kicking the ball through a banner of flags from participating countries.

The World Cup continues with its seventh year hosted by Chile, with Brazil defending its title by winning the championship back-to-back. The poster, designed by Galvarino Ponce, takes a more modern and minimalistic design featuring a football with the globe seemingly in space, drawing inspiration from the Sputnik missions during that time. Chile is highlighted on the globe with the same color as the football, signifying the country as the host.

The eighth World Cup saw England as hosts and champions as well. The poster looks more youthful with the first FIFA World Cup mascot, Willie the Lion, on the cover. Featuring the mascot was groundbreaking for the tournament as merchandise was produced and started the trend for the succeeding World Cup tournaments.

The 1970 World Cup was hosted by Mexico, where Brazil took their third championship. The poster is bold and minimalist, created by American artist Lance Wyman. The font draws inspiration from the country’s Olympics logo, which they hosted just 2 years prior and was created by the same artist.

West Germany hosted the 10th FIFA World Cup and won the championship as well. Their poster takes a more artistic approach, with German painter and artist Horst Schäfer creating a football player kicking a ball with large strokes and dabs on a black background.

In 1978, Argentina continues the trend of hosting the World Cup and winning the championship as well. The poster depicts two players in a celebratory embrace in a comic, dotted style pattern in Argentinian colours.

Spain played hosts for the 1982 World Cup, where Italy won their third championship. The poster, designed by national treasure Joan Miró, depicts his signature style of surreal, eccentric abstract patterns in Spanish colours. Some say that the poster's subject is supposed to be a player in a celebratory summersault. Can you see it?

The World Cup returns to Italy, where the second World Cup was held. Germany won their third championship that year. The poster, created by Italian artist Alberto Burri, used a black and white photo of the iconic Colosseum and was digitally edited to include a football pitch covered in the participating countries’ flags.

The 15th World Cup was hosted by USA, where Brazil secured their 4th championship. The poster was designed in the nation's iconic red, white and blue colours. The globe was represented in red and white stripes, similar to the country’s flag, where the country is shown in elevated blue. The number 94 is arranged in red footballs and points to the locations of the World Cup within the nation.

The World Cup is hosted by France again in 1998, and they successfully win the championship. A competition was held to select the poster where art student Nathalie le Gall’s work was chosen. The artwork was designed to depict the festivities on the football field with playful colours and shadows.

For the first time in World Cup history, the tournament was hosted by two countries. The poster was also collaborated by two artists from each nation, Byun Choo Suk (Korea) and Hirano Sogen (Japan), who created a masterpiece using calligraphic brush strokes that represent the rich Asian cultures of both artists.

Germany hosted the 18th World Cup, where Italy bagged their 4th championship. The poster showcases a night sky with a football formed by constellations.

Another World Cup historic year where the tournament was held in Africa for the first time. It is during this year that Spain won their first championship. The poster is bold and graphic in South African colors, showcasing an African player’s head about to strike the ball. His neck is also subtly showcasing the silhouette of the South African map.

The 20th World Cup was hosted by Brazil and crowned Germany with their 4th championship title. The poster is creatively designed to represent Brazil in all the elements. From the use of Brazilian flag colours, the shape of the legs forming the Brazilian map, to the icons that formed the figures of the players and the ball.

In 2018, the World Cup was held in Russia, where France successfully bagged their second championship. The poster is vintage and inspired by constructivist posters. The design features Lev Yashin, a legendary Russian goalkeeper known as "Black Spider" or the "Black Panther", appearing to catch a ball that represents the globe with Russia’s landmass visible.

The 22nd World Cup will be hosted by Qatar in 2022. The tournament will be hosted in the Middle East for the first time. The poster was designed by Qatari female artist Bouthayna Al Muftah and depicts traditional headwear being thrown in the air with a football on top, showing Qatar's iconic maroon hue. The poster depicts celebration and the nation’s love for the sport.

Are you excited about the FIFA World Cup 2022? Which of these posters is your favourite? Share in the comments below! Do share this article – it keeps us going! 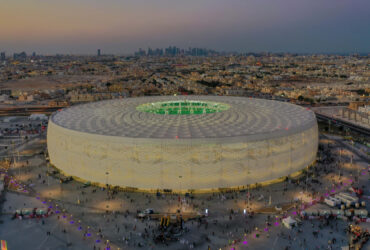