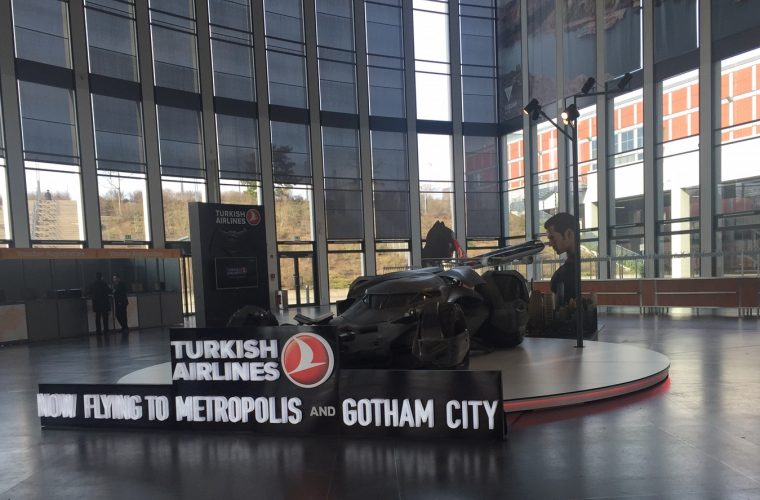 The iconic Batmobile that roars through Warner Bros. Pictures’ upcoming action adventure Batman v Superman: Dawn of Justice was on display at the Turkish Airlines booth at ITB Berlin between March 9 -13, 2016.

Mr. Ahmet Olmuştur, Turkish Airlines’ CMO said: ‘As being a leading airline flying to more countries and international destinations than any other airline in the world, we are very happy to become the official sponsor of one of the most anticipated movies of this year. I believe this partnership will not only add a further positive note to Turkish Airlines as a global brand but will also stoke excitement for the film at ITB Berlin. We are excited to have showcased the new Batmobile featured in Batman v Superman: Dawn of Justice at ITB Berlin, one of the world’s leading travel trade shows.’

‘In addition to seeing the newest model of the iconic vehicle, visitors to the Turkish Airlines’ booth at ITB Berlin will be able to view exclusive movie footage and receive movie-themed promotional items, such as a Time Out travel guide for Gotham City and Metropolis, which the airline has unveiled as its newest “gateways.’

In the movie, a pivotal scene will unfold aboard a 777 Turkish Airlines plane with Wonder Woman, played by Gal Gadot. Turkish Airlines will also be unveiling innovative movie-themed experiences that give fans an inside look into the world of the iconic super heroes. They will face off for the first time on the big screen when the film comes to theaters on March 25, 2016.