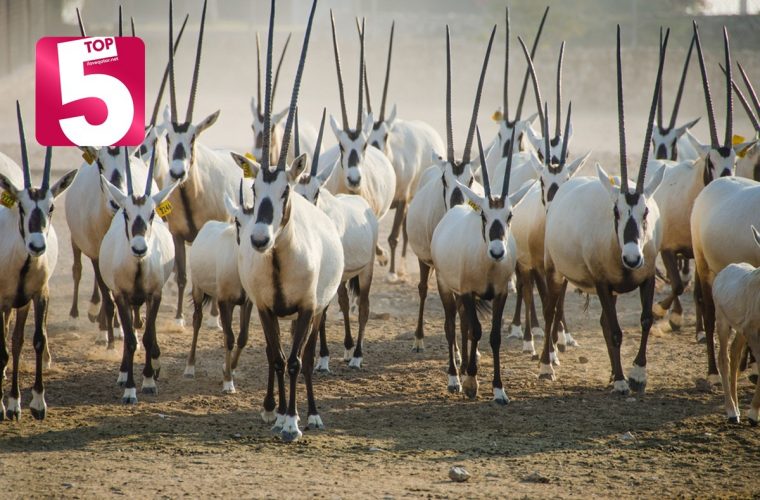 There's no denying the fact that despite its relatively minuscule size, Qatar is still blessed with a natural landscape that's unlike anything you've seen before. With 23% of its total land area made up of nature reserves, wildlife in this part of the world is without a doubt one of the least explored in terms of the two most basic foundations of nature—flora and fauna.

According to Visit Qatar, the country's main tourism council, Qatar provides a superb habitat for a variety of wildlife, from birds and reptiles to the fabled Arabian Oryx

"While Qatar’s desert climate limits the variety of flora and fauna, after any rain, the desert blooms with greenery. Qatar’s national animal, the Arabian Oryx, was extinct by the 1970s, but an ongoing breeding programme has led to its reintroduction since 1980."

There are 21 species of mammals in Qatar. These include foxes, jerboas, the gazelle (rheem), golden jackals, hedgehogs, honey badgers, and dugong—the largest of them all. Completing Qatar's wildlife pack are migratory bird species, including flamingos, and the fierce falcons which are considered a country emblem since many years ago.

Aiming to further raise awareness of Qatar's lesser-known wildlife, the Ministry of Municipality and Environment (Al Baladiya) launched recently a photography and videography competition under the theme "Our Environment, Our Legacy" where joiners have the chance to win as much as 11,000 Qatari Riyals (plus special prizes) by simply highlighting Qatar's flora and fauna in their works!

And because the ILQ team thinks that many of you guys would be interested to join Al Baladiya's latest environment initiative, we've decided to put up this Top 5 article so that if you're ever wondering on where to shoot, you'll have an ultimate guide by just reading through!

Also known as Al Shaniyah Park, this private zoo belongs to the Dosari family and is located in Qatar's Shahaniya municipality.

You might be wondering why a zoo made it to this list considering that taking photographs of animals inside cages is not considered a wildlife thing. The challenge here is for you to explore the zoo's 'Safari area' where you'll get an exclusive glimpse of some of the country's most well-kept animals.

Serving as a habitat for tigers, lions, camels, ostriches, emus, and dears, the zoo is open to the public till 7PM daily and entrance is for free though we had to pay a meager 10QR (intended for maintennance, according to its staff) during our last visit two years ago.

There are also acrobatic and magic shows every Thursdays and Fridays at 4:00pm.

Presenting a large expanse of natural greenery in sharp contrast to the surrounding desert landscape, this area of vegetation with its own ecosystem is notable for attracting resident and migrating bird life, including migratory birds flamingos and herons.

A great way to explore the mangroves is by kayak, available from several tour operators and specialist companies. Al Khor is also notable for its fishing communities and is a good spot to arrange a day trip out on the ocean. Make sure to bring your camera with you in both occasions as you never know when a pink long-legged bird would pass by!

If you have a zoom lens and up for some bird watching or insect hunting, then you must've heard about the Irkaya Farm already.

Located off the Abu Samra Road about 50 kilometers west of Doha in the south central plain of Qatar, the farm sits like a glowing emerald in the middle of the desert. It is home to many resident species and lies on the flight path of migratory birds and insects passing through Qatar. It can even be seen from space on satellite maps.

Though you cannot easily enter as the farm is not really family-friendly and closes by 10AM every Fridays, your effort of going the extra mile will for sure be rewarded as it's really beautiful and calm once inside.

No wonder why many Qatar-based photographers call it 'Heaven on Earth.'

Travel guide book publisher Lonely Planet calls this historic north-western village in Qatar "a pleasant destination for a day trip" as the beches surrounding the rock formations and a hidden 'film city' are full of empty oyster shells, with rich mother-of-pearl interiors, and other assorted bivalves.

"The shallow waters are quiet and peaceful and see relatively few visitors, making the area a pleasant destination for a day trip."

Offbeat Qatar suggests that if the weather is nice, you could walk into the oasis next to Film City. An artificial drinking pond sometimes attracts the herd of Oryx grazing nearby—a great opportunity to point and shoot.

Just a warning though: Even though Oryx are beautiful photo models, they will defend their young ones and might attack if you get closer than 30-40 meters. Thus keep kids supervised.

Animals to see: Desert fox and hedgehog, though very rare

We've featured this beauty more than twice on our site already and the only reason that we're seeing why the Musfur Sinkhole constantly deserves a spot with every Top 5 article is because it's unique, highly-accessible, and all sorts of mysterious from the inside out.

Deemed as the deepest of the known and accessible caves in Qatar, Musfur's visible bottom is around 100m deep, but some scientists suspect a larger cave-system to extend below. When you enter the cave through the relatively small opening, once your eyes adjusted to the darkness, you will see a large chamber opening up and extending below. You'll see can see different kinds of rock and sediments, hundreds of nesting birds, and traces of small mammals including a small desert fox and a hedgehog.

Atlas Obscura also points out that unlike many sinkholes, there are no bats living inside this giant cave, but migratory birds regularly build their nests high along the jagged layers of limestone and gypsum. The ancient sinkhole is also crawling with bugs native to Qatar but in a highly concentrated number, pointing at an ecosystem inside the hole that is quite different from the one found on the surface.

About the Ministry of Municipality and Environment

Are you planning to join Al Baladiya's wildlife contest as well? If yes, did you find this Top 5 article of ours helpful? Drop us a line in the comments and also, don't forget to like and share this article—it keeps us going!