Qatar Airways lands in Langkawi for the first time 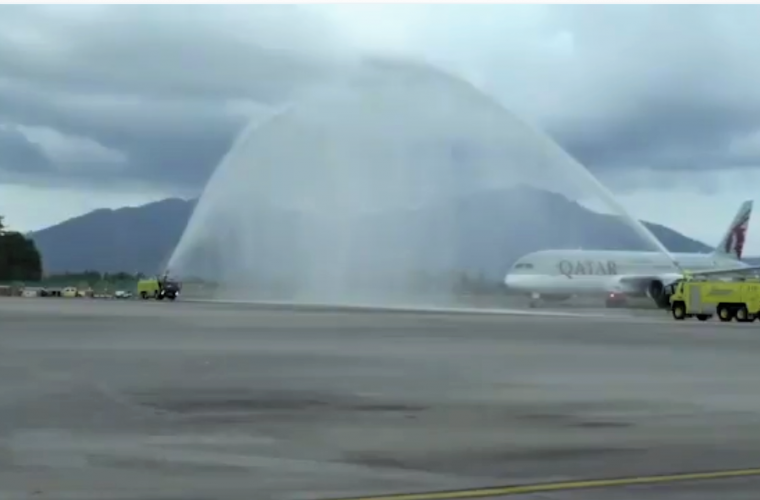 Qatar Airways celebrated the arrival of its inaugural flight to Langkawi, Malaysia, in presence of a lineup of officials from both Qatari and Malaysian sides.

On the occasion, HE Qatar Airways Group Chief Executive, Akbar Al Baker said: "We are very pleased to launch our new direct service to Langkawi, our third gateway into Malaysia. Langkawi is both an important tourist destination and a growing conference and exhibition centre which is becoming increasingly popular with international visitors. This new gateway will offer our Malaysian passengers even more convenience and enhanced connectivity to an extensive choice of destinations on our global route network. We invite all our global passengers to experience the Jewel of Kedah', and we look forward to welcoming you all on board."

General Manager, Airline Marketing of Malaysia Airports, Mohamed Sallauddin Mat Sah said: "We take immense pleasure in welcoming Qatar Airways to Langkawi International Airport (LGK) who has been our airline partner at the Kuala Lumpur International Airport for the past 18 years. Early last year, Qatar Airways began flying direct to Penang International Airport from Doha. This new flight to LGK, which is an extended route via Penang, will definitely be a great addition to the international airlines operating at LGK. Being the first Middle Eastern carrier to operate at LGK, this long-haul flight will expand the tourism opportunities in Malaysia, particularly in Langkawi, The Jewel of Kedah. We look forward to creating many more memorable moments with Qatar Airways."

Qatar Airways began direct services to Kuala Lumpur in 2001, and launched its Penang service in 2018. The airline currently provides more than 25 flights per week to Malaysia. In October 2001, Qatar Airways announced its codeshare agreement with Malaysian Airlines, and this was expanded in 2018.

Langkawi is fast becoming an internationally recognized tourist destination, seeing tremendous growth in its number of visitors, having grown almost 10% since 2013. The tropical paradise holds the status of UNESCO Global Geopark, one of only 64 in the world. It is also a Duty Free Zone, making it popular with shoppers, and provides various MICE (meetings, incentives, conferencing and exhibitions) facilities.