Protests in many countries in solidarity with Qatar 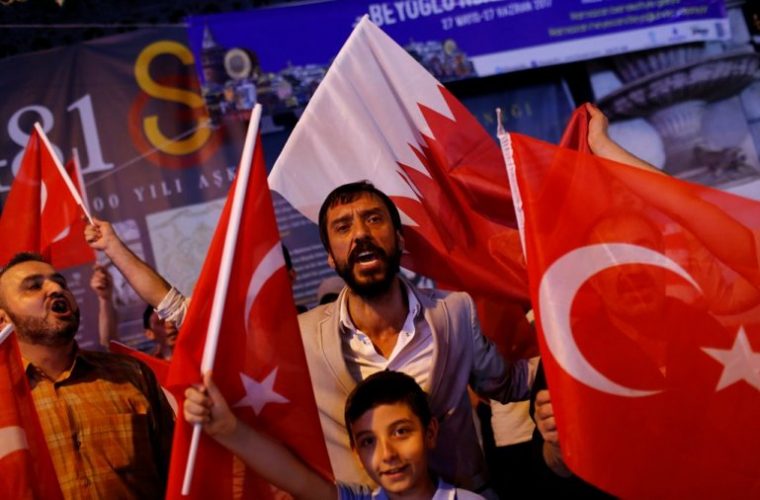 In a show of solidarity with Qatar, many people protested in the capitals of countries which joined the campaign of breaking relations with Qatar - a campaign that was based on false allegations and followed unprecedented and escalated measures. Arab masses also showed their support for the State of Qatar through social media platforms, a matter which led to a number of countries that have severed their diplomatic relations with Qatar to pass laws criminalising sympathy with Qatar as well as to block Qatari media sites on the Internet and Al Jazeera channels.

This comes at a time when Qatar calls on all those who live in this noble land to rise above and continue to avoid responding similarly to the abuses that has been circulated in various social media platforms.

It also urges them to show a sense of responsibility by refraining from directing any kind of abuses to other countries, their leaders or their peoples.

The right of Qatari citizens and residents to express their opinions is always guaranteed, however keeping in mind the Islamic and cultural values that has been bestowed on us.

The protests in Moroni, the Capital of Comoros, are a good example as people took to the streets condemning the decisions of boycotting Qatar and stressing the role played by Doha in the establishment of international peace and security. The demonstrators rejected the decision of the government of the Comoros to sever diplomatic relations with Qatar.

"The Comorian government unilaterally decided to cut off diplomatic relations with the State of Qatar without consulting with the governors of the three islands that make up the Union of the Comoros," said Governor of the autonomous island of Anjouan Abdou Salami Abdou.

The Governor called on the government of the Comoros to reverse its decision and be part of the solution and not part of the crisis, pointing to the need to review the Gulf resolutions regarding severing relations and imposing air embargo. The capital, Moroni, witnessed mass marches in which the participants raised the flags of Qatar and carried banners written in Arabic (people love Qatar). They also held a protest in the square of Independence in the centre of the capital Moroni, condemning the decision of their government to sever diplomatic relations with Qatar, stressing that the decision does not reflect the will of the people of the Comoros and harms the strong historical relations between the two countries.

In Mauritania, people in capital Nouakchott, demonstrated outside of the Qatari embassy against its government's decision to severe ties. The protesters headed to the Embassy of Qatar hours after the announcement of Mauritanian Foreign Ministry's decision to cut off relations with Qatar. The demonstrators chanted slogans of solidarity with Qatar, stressing that the decision of its government does not represent the Mauritanian people. The social networking sites were also filled within a few hours with thousands of posts in solidarity with Doha and condemning the official position of Mauritania.

Several Mauritanian opposition parties called on the government to reverse its decision to cut diplomatic ties with Qatar. The National Rally for Reform and Development, for its part, said Nouakchott's decision to cut ties with Qatar was proof that Mauritanian policymaking remains dependent on foreign agendas that do not take into account Mauritanias national interest, religious unity or the delicate balance of our foreign relations.

In the Jordanian capital Amman, a statement by the National Alliance for Reform condemned the government's decision to downgrade diplomatic relations with Doha, adding the decisions are an additional escalation of the crisis instead of contributing to extinguishing its fire and make the country a party rather than being part of solving it.

The statement described the decision as "shocking" and constitutes a departure from the balance that Jordan has taken in all its relations with its Arab brothers and a blow to Arab relations with a sister country that has an honourable past in standing with Jordan. (Source)

Qatar has honourable positions in addressing the issues of Arab and Islamic nation, at the top of which is the Palestinian cause.

The National Alliance for Reform, in its statement, appealed to the Jordanian King to order the government to rescind its shocking decisions to the Jordanian people and their national interests and to contribute to the international, regional and Arab efforts to solve the crisis and prevent the continuation of its negative repercussions on Arab and Islamic nation.