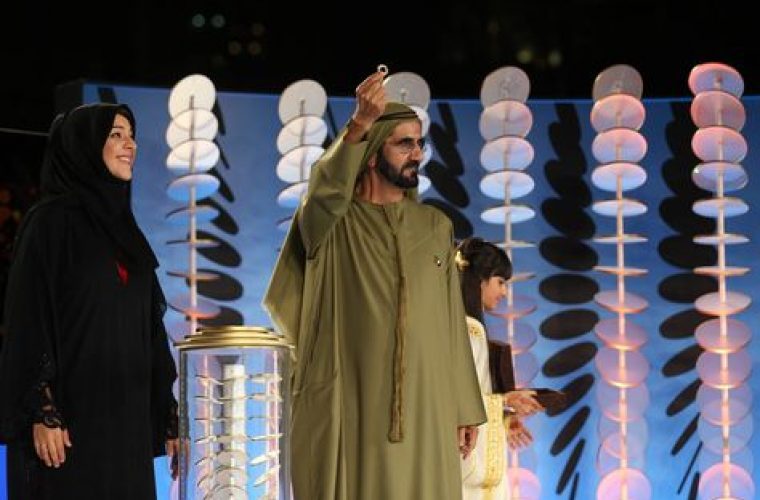 The official logo for Dubai Expo 2020 was launched yesterday by Sheikh Mohammed bin Rashid Al Maktoum, Vice President and Prime Minister of the UAE, and Ruler of Dubai.

The design has been inspired by a 4,000-year-old ring found at an ancient archaeological site in the Al Marmum area of Dubai.

The Saroug Al Hadeed site, where thousands of rare artefacts dating back to the Iron Age have been found was discovered by Sheikh Mohammed in 2002.

“We have chosen an authentic Emirati logo for Dubai Expo 2020,” Sheikh Mohammed said at the launch, which was held at the Dubai Fountain in Downtown Dubai.

“The design of the logo is inspired by a civilisation that existed 4,000 years ago in an area extending from Baynounah in Abu Dhabi to Saroug Al Hadeed in Dubai and from Maliha Valley in Sharjah to the mountains of Ras Al Khaimah and Fujairah. This land connected ancient civilizations and we will continue to be a hub that connects the world”.

During the event, Dubai’s Crown Prince, Sheikh Hamdan Mohammed bin Rashid Al Maktoum, honoured the three finalists of the competition to design the logo, which attracted about 19,000 entries.

“The Expo 2020 logo represents our message to the world that our civilisation has deep roots,” Sheikh Mohammed added. “We were and will always be a pot that gathers civilisations and a centre for innovation. Over 4000 years ago, the people who lived in this land had a deep creative spirit and today the people of this country are building the nation’s future for centuries to come.

“Dubai is the city of gold, but the minds and hands of our citizens are more precious than gold.”