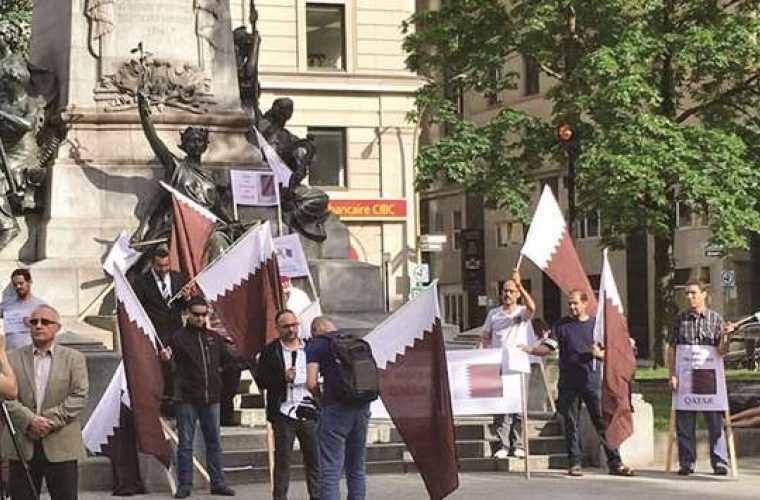 A group of Canadian activists organised a demonstration in solidarity with the State of Qatar in central Montreal, the economic capital of Canada’s province of Quebec.
The demonstrators raised Qatari flags and banners bearing slogans calling for an end to the blockade that has been imposed on Qatar by Saudi Arabia, the UAE and Bahrain for more than two weeks.
The protesters repeated chants in English, French and Arabic, highlighting what the Qatari people are being subjected to by their neighbours, which neither belongs to Islam nor Arab culture, stressing that Qatar, which is known for moderation and humanitarian initiatives, doesn’t deserve to be treated in that way.
They reaffirmed the need to return to dialogue and settle any disputes through understanding so as to avoid any further rupture of the Arab fabric.
One of the demonstrators questioned whether any of the sides that imposed the blockade had realised that they are taking this action during the holy month of Ramadan, which Muslims take pride in as a month of mercy, forgiveness, solidarity and good deeds.
Another demonstrator stressed that the blockade imposed on Qatar contradicts with all international norms and laws as well as humanitarian principles.
A female protester reiterated that the harm that Qatar is subjected to is an unjust act that will always be associated with the blockading countries. The march’s co-ordinator, meanwhile, expressed regret over the campaigns carried out by whole countries to undermine Qatar’s reputation and hurt its people, while everyone can attest to Qatar’s favours for many peoples of the region as well as its constant work to help the weak and mediate between the adversaries in Arab conflict zones.
Another organiser of the march said Qatar has never supported terrorism, adding that those who support terrorism are well-known as well as those who fuel strife for the benefit of foreign countries and other parties, noting that the people are not fools and don’t blindly believe everything they are told.
The organisers called on the Canadian prime minister, the Canadian government and the international society to “tackle the aggressive acts carried out by Saudi Arabia, the UAE and Bahrain” against the government and people of Qatar, reminding Canadians of the efforts of the Qatari Foreign Ministry for the release of a Canadian citizen who was held captive in Afghanistan and returning him home to his family. (Source)