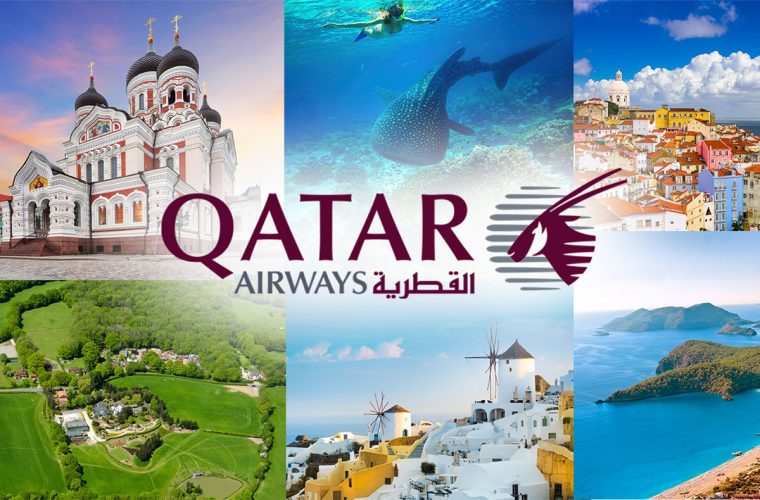 For several years now, Qatar Airways has been stealing the show at the annual ITB Berlin travel fair, and the 2018 edition is no exception. The world’s largest international travel fair was lit with pomp and flair as award-winning airline Qatar Airways announced not only its aggressive expansion plans, but also its 16 new destinations for 2018-2019. The announcement was greeted by wild cheers and applause by the participating hotels, tourist boards, tour operators, system providers, car rental companies, and even the fellow airlines!

Update (as of November 11, 2018): The Exit Permit rule has been lifted for expats in Qatar since October 28, 2018. To check online if you still need an Exit Permit, click HERE.

Almost 200 members of the international media were in attendance at the March 7 press conference as Qatar Airways Group Chief Executive, H.E. Akbar Al Baker, said the move is a direct reflection of their commitment to connecting travellers across all corners of the globe in a way that is meaningful and convenient to them.

He noted: "We are committed to continuing our ambitious growth strategy, in order to be able to provide our passengers with as much choice as possible and to take them anywhere in the world they wish to go.”

With this latest announcement, we're adding to your excitement by bringing you our Top 8 new Qatar Airways destinations that we are sure you’d be itching to fly to right away!

(Disclaimer: Make sure to get those travel funds ready. The next thing you’d like to do after going through this list is to book a flight right away!)

Among Qatar Airways' big announcements during the ITB Berlin travel fair is that it's going to be the very first Gulf carrier to begin direct service to Luxembourg -- one of the richest countries in the world. A landlocked country in western Europe, its capital of the same name -- Luxembourg City -- is one of the three official capitals of the EU. The quality of life in the country is often considered above average with nearly half of its demographics comprising foreigners. And if you grew up reading and watching fairy tales, you'd surely find a match in Luxembourg as most of its UNESCO-listed historical sites are memorably perched along dramatic cliff tops. And what is a fairy tale without the castles? You'll surely stumble upon lots of them once you decide to give Luxembourg a go!

In September 2017, Qatar hosted the World Tourism Day which was attended by this year's host country -- Portugal. The representatives of the European country, who spoke on stage before an eager Doha audience, said they were very excited to finally showcase what Portugal has to offer for tourists. Lisbon -- Portugal’s hilly, coastal capital city -- is one of the oldest cities in the world. What separates Lisbon from its neighbors is the Mediterranean weather that the city enjoys -- it has one of the warmest winters of any metropolis in Europe. This is one reason why tourists from all over the world prefer flocking to Lisbon instead of travelling to some of Europe's overrated and crowded cities.

The Old Town in Estonia's capital city Tallinn is not just one of the best preserved medieval cities in all of Europe but is also listed as a UNESCO Heritage Site. The birthplace of Skype, Talinn has the highest number of startups per person in Europe so finding it on the list of the Top 10 Digital Cities in the world is not a surprise anymore. The city is the finest definition of a compressed but an ultimate safe haven. If you prefer to explore it on foot, make sure to visit the Rocca-al-Mare Open Air Museum's typical rural Estonian taverns, windmills and watermills, and see the onion-domed 1900 cathedral, or join the bustle in historic Town Hall Square. After a whole day of excursion, we won't blame you if you get madly deep in love with this picturesque European city!

There was once a BuzzFeed video chronicling a woman's rise to popularity upon discovery of a country called Malta. From a typical employee, the lady became an overnight Internet sensation and was even invited to travel to her 'newly-discovered' country for free! No wonder its capital, Valletta, is one of the “underdog” destinations of Europe when compared to its neighbors, Paris and Rome. The truth is, if you decide to stroll along the city's colorful pavements, you'll realise Valletta is relatively less expensive. Also, most Maltese people know English so language barrier isn't an issue. Outside Valletta, there is Popeye Village -- a small attraction fun park which was formerly a film set for the 1980 live-action musical feature of the same name. Don't miss it!

Vietnam is without a doubt one of the favorite destinations in Southeast Asia for hardcore backpackers thanks to its friendly people, rich gastronomy, and of course, cheap fares on almost anything a budget traveller may be looking for. Though Hanoi, its capital city, is mostly dense in terms of tourist population, some areas in Vietnam aren't that much crowded. For example, the coastal city of Da Nang. It is the fourth largest city in Vietnam and is known for its sandy beaches and history as a French colonial port. Apart from some shopping highlights and historical sights, the main attraction is its proximity to the well-known My Khe Beach, Lang Co Beach, Hoi An and My Son. With all the developments the city is undergoing, it’s safe to say that nowhere is Southeast Asia changing as fast as Da Nang.

While the city of Bodrum never loses its cool, despite the surge in tourists, Antalya just goes with the flow as it's considered the fastest-growing city in all of Turkey thanks to its great mix of beaches and traditional Turkish culture. And despite having their very own, exemplary aesthetic attributes, Bodrum and Antalya still meet at a certain common denominator -- their equally-gorgeous and stylishly modern features make them the ultimate tourist darlings giving Turkey's biggest city -- Istanbul -- a run for its money.

Mykonos and Thessaloniki are two of Greece's top tourist hotspots for a myriad of reasons. If you're a party animal who loves attending concerts by the beach, then the former is your to-go-to city. But if you're photography-inclined and fancy a little bit of history, then be sure to wrap a camera around when you visit Thessaloniki -- Greece's second-largest and hippest town. Hotels, beach bars, restaurants, and national museums are all mushrooming in both cities. Once you wander off to either of these two, we're sure you'll gain a relatively bigger social media following for your perfectly-white and blue Instagram feed! After all, this is what Greece is famous for.

With Filipinos making up roughly 10% of the entire population in Qatar, it's quite common to hear a typical Kabayan saying: "I wish there's a direct flight from here (Qatar) to my province back home." We all know the Philippines comprises 7,107 islands -- making it imperative that it’s rounded off to three major island groups to easily address the country's diversity. A flight from Doha to Manila might sound cozy for those living in Luzon but for Cebuanos (Visayas region) and Davaoeños (Mindanao region), landing in Manila means their journey has just kicked off! Tourists will likewise rejoice as both provinces have a plethora of sights to offer. While Cebu island is abundant with white-sand beaches and spectacular diving spots, Davao -- home to President Duterte and the Philippines' highest mountain Apo -- is sprawling with culinary, cultural, economic and commercial attributes, making it look a lot like the country's capital Manila.

Qatar Airways currently operates a modern fleet of more than 200 aircraft via its hub, Hamad International Airport (HIA). Just last month, the airline welcomed the Airbus A350-1000, for which it is the global launch customer.

And while the airline hasn't yet announced the inaugural dates for the new destinations, they've commented on a video post on their Facebook fan page that they will start flying to Antalya, Turkey starting June 13. They have also said via Messenger that once the new routes start operating, the flight fares will be published on their website.

What do you think of this great news from the World's Best Airline? Are you planning to fly to one of these new travel destinations soon? Drop us a line in the comments below and also, don't forget to like and share this article -- it keeps us going!