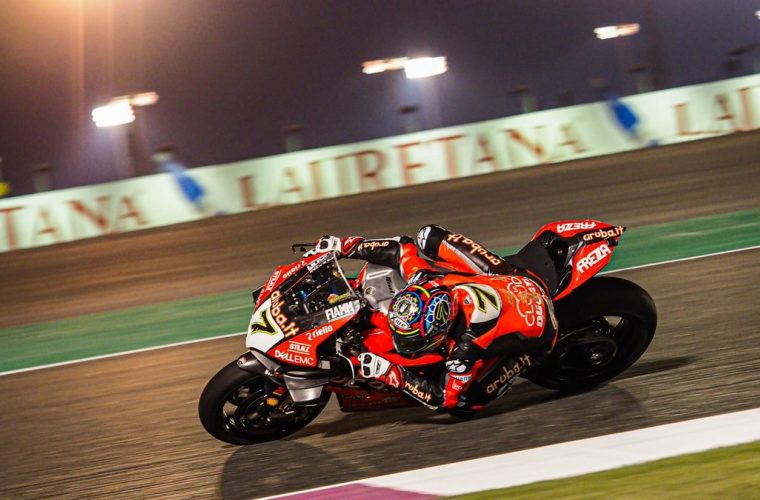 The first day of action at the Losail International Circuit came to a close with the 2019 MOTUL FIM Superbike World Championship class taking to the circuit. The final session of the day for the WorldSBK class was one of the most important yet, with the first look of realistic race pace coming in the night time. Rocketing up the order, Chaz Davies (ARUBA.IT Racing - Ducati) hit top spot, ahead of Jonathan Rea (Kawasaki Racing Team WorldSBK).

Chaz Davies has been twice a winner at Losail and looks like he could be on course to repeat that this weekend, topping the final session of Thursday. Davies, who was in the top six for the entirety of the session, hit first with five minutes to go and headed his teammate. It was a strong session for Alvaro Bautista, as the Spaniard looks to finish his rookie season in World Superbike on a high. The 34-year-old was down in seventh after the first session but come the end of FP2, he was up in third.

Having led to the opening session of the weekend, Jonathan Rea was right back in the mix of things and ready for battle in FP2. The Northern Irishman was in second for the majority of the session and that is where he would finish come the end of proceedings, with the five-time World Superbike Champion working solidly on his race pace. After a difficult opening session, Leon Haslam (Kawasaki Racing Team WorldSBK) was left down in 12th.

After a top three performance in FP1, Toprak Razgatliolgu (Turkish Puccetti Racing) set his sights on third place overall in the Championship in the best way possible. The 23-year-old from Alanya is in a strong position to overhaul those ahead of him in the Championship and completed the first day of Qatar action in fourth. There were plenty of other Independent riders inside the top ten, with Sandro Cortese (GRT Yamaha WorldSBK) in ninth and Loris Baz (Ten Kate Racing - Yamaha) in tenth.

Closely matched in the Championship and closely matched after Thursday action, the Pata Yamaha WorldSBK Team duo of Alex Lowes and Michael van der Mark continue to squabble on their last weekend in the same team. Van der Mark had the upper hand and was up in fifth place, whilst Lowes was seventh when the chequered flag came out. Both are in a fierce battle for third with Toprak Razgatlioglu and will thus need to work together in order to bring Yamaha the bronze medal position.

The BMW charge in Qatar was led by 2013 WorldSBK Champion Tom Sykes, who spent most of the session down in 15th place, before firing in a good lap time with less than eight minutes to go, putting him in sixth. Teammate Markus Reiterberger (BMW Motorrad WorldSBK Team) came to the fore and was eighth after day one. The German rider, so far without a ride confirmed on the 2020 grid in WorldSBK, put himself in the shop window at the right time, reminding everyone what he is capable of.

Outside of the top ten on his final weekend, Marco Melandri (GRT Yamaha WorldSBK) goes into the final two days of his WorldSBK career in 14th, whilst top Honda belonged to Leon Camier (Moriwaki Althea Honda Team) in 17th, now confirmed at BARNI Ducati for 2020.

Qatar's Saeed Al Sulaiti was 11th fastest in the World Supersport free practice one, while he was down 16th in the second session. Al Sulaiti was running inside the top ten for most of the session, much to the delight of the home crowd.

In remarks, Qatar Motor and Motorcycling Federation (QMMF) President Abdulrahman Al Mannai expressed his hope for an amazing success of the final round of World Superbike Championship, in which world riders are competing at the Losail International Circuit.

Al Mannai said what distinguishes this Doha round is the participation of Saeed Al Sulaiti of QMMF Racing Team, expecting that he will make a stronger results for Qatar, which hosts key motorbike championships annually.

He added that Al Sulati performed well in three consecutive years and achieved great results in Spain international championship, adding this enables him to make great success in Qatar's round. He also praised the efforts of the Qatari racing team head Amro Al Hamad who spared every efforts to remove obstacles facing Al Sulati's participation in Qatar's round.

Al Mannai also praised the Ministry of Culture and Sports' support for all the events held in Qatar as well as thanked government agencies and partners involved in this event.

In another statement, Vice Chairman of Losail Circuit Sports Club (LCSC) Khalid Al Remaihi said the goal of Saeed Al Sulaiti's participation in the final round of the World Superbike Championship is to have a Qatari participant in this international event, expressing confidence that he will do his best to achieve good results in the competitions, especially after his brilliance in local tournaments and Spain international championship.

Al Rumaihi said that Losail Sports Club succeeded this year in hosting the WorldSSP300 for the first time in Doha, as this category was organized only during tours held within the European continent.

Al Rumaihi thanked the QMMF for its continued support to the club, and thanked racing team head Amro Al Hamad, one of the distinguished Qatari cadres, who made great efforts to facilitate the participation of Saeed Al Sulaiti.

The Vice Chairman of LCSC also thanked the Ministry of Culture and Sports for supporting all the activities of the club, as well as all government agencies involved in facilitating the hosting process and the success of this event.