With one day to go, here are the top-10 reasons to go to the Doha 2015 AIBA World Boxing Championships 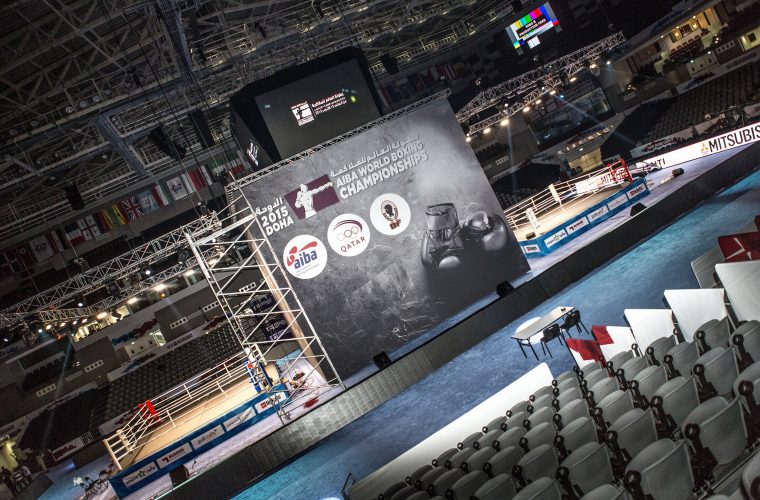 Qatar opens its doors to the first-ever World Boxing Championships hosted in the Middle East tomorrow at 7pm, with the opening ceremony at the state-of-the-art Ali Bin Hamad Al Attiyah Arena set to welcome 260 boxers from 74 countries.

DOHA, QATAR – 4 October: The opening ceremony will be graced by the attendance of Heir Apparent and President of the Qatar Olympic Committee, H.E. Sheikh Joaan bin Hamad Al Thani, as well as the President of the International Boxing Association (AIBA), Dr. Ching-Kuo Wu, and will be a spectacular showcase of Qatar’s ability to host major international sports events.

With the global boxing elite having arrived in the past few days, the local organizers are ready for 10 days of exhilarating action and jaw-dropping entertainment for all the family. Yousuf Ali Al Kazim, the Executive Director for the Doha 2015 AIBA World Boxing Championships, and President of the Qatar Boxing Federation, is raring to go:

“Our teams have worked tirelessly to get ready for the World Championships and with only one day to go there is a sense of real excitement about the place. Thanks to the great support from the AIBA delegation, and the relentless guidance from the Qatar Olympic Committee, we are confident that this marquee event will be a huge success.”

The World Championships will be broadcasted to a TV audience of close to 500 million across 112 different countries. Al Kazim hopes that the huge international interest for world boxing’s signature event will inspire locals to come and support their heroes:

“This is really a once-in-a-lifetime opportunity to witness the best boxers on the planet go head to head right here in Doha. We have a number of strong expat communities, and almost all of them will be able to see their local boxing hero in the ring. Also, we will have Team Qatar competing for the first on home soil, so there will be something for everyone to enjoy.”

Tickets are priced between QR10-50 and can be purchased online at https://tickets.virginmegastore.me, and in Virgin Megastores in Villaggio Mall and Landmark Mall, as well as at the venue throughout the World Championships between 5-15 October.

Here are the top-10 reasons to go:

1. Support Team Qatar: This will be the biggest and toughest competition that the Qatari boxing team has ever been involved in. For the five local hopefuls, it is a dream come true to perform on home soil. Come and support Team Qatar!

2. Best of the best: 260 athletes from 74 nations will compete in the World Championships and it will be broadcasted to half a billion TV viewers globally.

3. First time here: This will be the first time ever that world boxing’s signature event is held in the Middle East. It is set to be a great sporting spectacle for all the family!

4. Most competitive ever: For the first time in history, boxers across five continents have had to go through qualification rounds to book their place at the World Championships. Doha 2015 will be the most competitive boxing event ever!

5. Gateway to Rio 2016: The Doha 2015 AIBA World Boxing Championships is the most important event in the boxing calendar this year, and will have 23 qualifying spots on offer to next year’s Olympic Games on offer.

6. Multicultural melting pot: Join people from Doha’s many international expat communities as they support their heroes. The World Championships will bring together people from all over the world for this historic occasion. Be a part of it, and have a blast!

7. Visit the state-of-the-art facilities: Come and visit the Ali Bin Hamad Al Attiyah Arena, known for its dynamic and oval shaped exterior. Crowds will pack into the main arena which holds a maximum of 7,700.

8. Enjoy the fan zone: A spectacular and engaging fan zone will be set up outside the arena for all to enjoy. Arrive early for each day of sensational boxing entertainment, and experience all that is on offer in the fan zone – something that all the family can enjoy!

9. Twice as much fun: Until the quarter-finals from 10 October onwards, there will be two boxing rings set up in the arena, which means you can follow two bouts at the same time. Double action!

10. Be there when it starts: The opening ceremony will take place on 5 October at the Ali Bin Hamad Al Attiyah Arena and is set to be a great spectacle. Come and watch the host nation officially open the Doha 2015 AIBA World Boxing Championships in style.