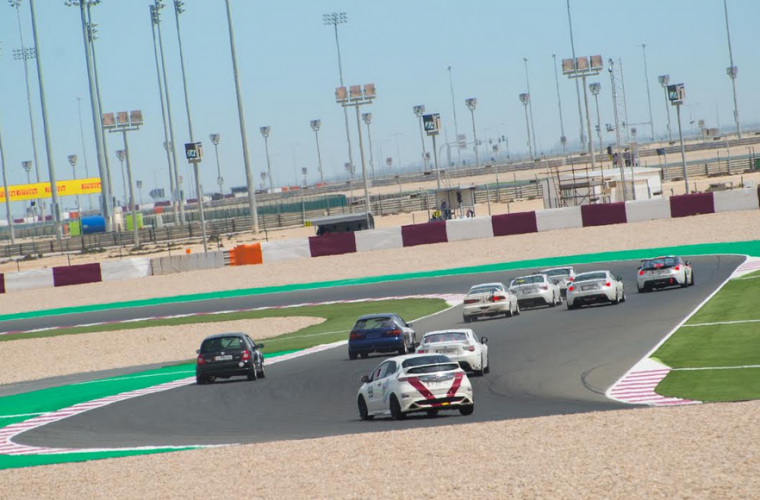 The leader of the Qatar Touring Car Championship, Abdulla Al Khelaifi won his sixth race in a row this weekend at Losail International Circuit.

Al Khelaifi was the fastest driver during the free practice and he started on pole position in the first race of the weekend. The Toyota driver took the lead during the whole race and managed to cross the checkered flag with a gap of 1.902 ahead of Mahmoud Al Khalaf.

‘I managed to secure pole position and then increase the gap from the beginning of the race. I planned to save the tires for next race, however Mahmoud was always in my rear view mirror so I couldn't do anything but drive as fast as I can. Glad to finish first’ said Al Khelaifi after the first race.

For first time in the season, Mahmoud Al Khalaf finished second in the podium ‘I am very happy to finish second for the first time. I really tried to catch up to Abdulla but I over heated the tires by the middle of the race and had to cool them down, but in overall it was a good and a clean race’ commented Al Khalaf.

Omran Karama who started in third place on the grid finished third in the podium ‘The race was extremely tough today, but I’m very happy to be on podium again. The hot climate was affecting the cars and making the race harder for all competitors. In general, the race went fine and I will be stronger and stronger in the coming rounds. Being the champion holder gave me a lot of pressure this year, but I will surely return back stronger. Looking forward for the next race after two weeks’ Karama said after the podium.

In the second race, with the reverse grid the competition was stronger and more challenging for all the drivers. Al Khelaifi, who started in the fourth row, was stuck a lot of time between all the cars and only at the third lap he reached the second place behind Mansour Al Hajri who was leading the race.

At that time, Mansour already managed to create a gap but unfortunately for him, he had some mechanical issues with his car and Abdullah overtook him in the last part of the race and took another win.

‘This was definitely the most challenging race in the championship. I was stuck between all cars as I started from the back of the grid, and by the time I managed to pass them Mansour was leading by ten seconds. Had to push really hard to reach him. By the 8th lap I noticed that he had some mechanical issues, so I overtook him and finished first’ said the winner.

The second place in the podium was for Mansour Al Hajri ‘It was a great race, if not for the fuel starvation I had by the end of the race but I am happy to be again in the podium. Fantastic championship and I am happy that every round is getting more and more challenging as new drivers join us’ said Al Hajri.

Mahmoud Al Khalaf finished the race in third position ‘It is always interesting to do a reverse grid race, and staring from the back was very challenging and exciting to try passing the other drivers. Very happy to finish third and looking forward to the next round in May’ commented Al Khalaf.

In the second race, Omran Karama ended in fourth place and Adham El Dib finished again in the fifth place.

After this third round, Abdulla Al Khelaifi is now leading the championship with 87 points. Mansour Al Hajri is second with 79 points and Omran Karama third with 68 points.

The next round will be on the 22nd April.