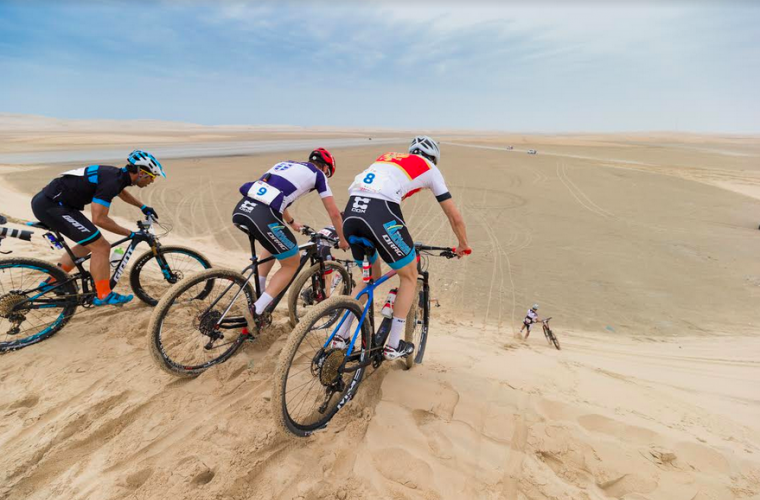 The third edition of Al Adaid Desert Challenge concluded on Friday, with more than 350 runners and cyclists taking part in the grueling contest at Sealine area, south-east of Qatar.

The UCI MTB Class-3 event, organised by Qatar Cyclists Center in cooperation with Qatar Tourism Authority, is the toughest off-road mountain bike race in the region, and this year a running race was added to its programme.

A new more-challenging 38.5km cycling route, that required overcoming seven sand dunes, did not stop Dutch legend Erik Dekker from defending his title in the Elite category. The former Olympic-medalist, finished the race in 1:24:55.

In fact, the top three positions did not see any changes from last year, but the battle for the title was more exciting, as New Zealand’s Roman Van Uden finished second just 32 seconds behind the winner. Frederic Gombert of France came third with a time of 1:25:59 H.

In the Women’s UCI Elite category, Finland’s Pia Sundstedt easily won her third straight title, finishing the race in an hour and 47 minutes, with Sophie Giovane of France coming second.

Dr. Jamal Rashid Al Khanji, Managing Director of Al Adaid Desert Challenge, commented: “The success of the 2018 Al Adaid Desert challenge exceeded all expectations, I would like to thank all our sponsors, partners and supporters, without them it wouldn’t have been possible to organize this amazing event”.

“More than 350 participants painted a wonderful picture about Qatar and the showed how the country’s community are enthusiastic about sport. They also helped to shed light on one of the most amazing natural wonders in the world. Congratulations to all the winners and all the participants. We promise to do our best to make the next edition of Al Adaid Desert Challenge another remarkable success”.

More than 60 Qataris participated in this year’s challenge, and the cycling race also counted as the Qatar National MTB Cross Country Championship. Local favorite Fawaz Al Hichan, won the title, after crossing the finish line in 1:55:06.

Dr. Abdulaziz Al Kuwari, President of Qatar Cyclists Center, won second place in the same race, he commented: “It was a thrilling experience, and the new route, in addition to the battle for Qatar Champion title added a lot of excitement to the event. The performance of Qatar Cyclists members exceeded all expectations, and the experience they gained through competing against international riders is invaluable.

“We have seen people from all ages, genders and nationalities taking part in Al Adaid Desert Challenge today, it shows the huge role this event plays in promoting cycling in Qatar, everyone enjoyed being active, trying a new challenge and also enjoying the beauty of Qatar’s nature”.

Another impressive result for local riders came in the Fatbike Category, as Qatar’s Mubarak Al Ajji won first place with a time of 2:08:59 H.

Experienced cross-country runner Andrew Jones of Great Britain won the first edition of the running race completing a distance of 26.7 km, that included four sand dunes, in a time of 1:49:01 H, while his compatriot Caroline Drew won the women’s title, crossing the finish line after 2:25:21 H. Former Samla Race Champion, Ali Al Hajri, registered the best result for Qataris in the running race, finishing 8th overall, with a time of 2:09:21 H.

Dr. Mohammed Jaham Al Kuwari, Qatar Cycling and Triathlon Federation President, commented “We are really happy with what the participants achieved this year, despite the more challenging route compared to last year.”

“Congratulations to all the winners. We are proud with the record number of Qatari participants taking part in the event. We have witnessed fierce competition between them for the title of the first Qatar National Mountain Bike Cross-Country Championship”, he added.

This year’s event required extra efforts from the organisers due to the record number of participants, the new running competition and the new route. They did well to mark and secure the participants’ route, while also providing a parallel route used by the spectators, event sponsors, and media.

The festive atmosphere at the finish area in Doha Bus Desert Adventures Camp was the perfect end scene to this remarkable event, as riders and runners, from more than 45 different countries, took a deserved break to replenish their energy and celebrate their triumphs with colleagues, friends and family members, ahead of the prize-giving ceremony.

A Kids Race was also organised at Doha Bus Camp and added to the excitement of the event.