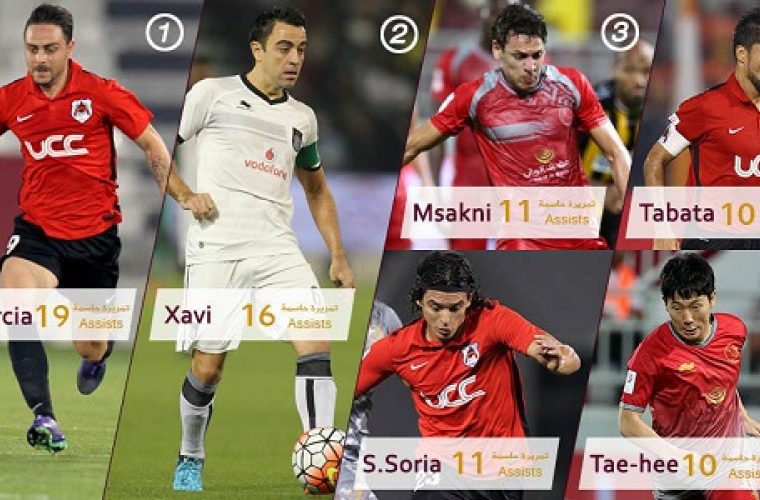 The 2015/2016 Qatar Stars League season saw a major battle between a number of teams who distinguished themselves in the figures and statistics department through goals, chances created and decisive passes.

The QSL website reviews the top 10 assist makers of the 2015/2016 QSL season. The statistics and figures were provided by the QSL’s official data supplier, Prozone.

Sergio Garcia Spain's Sergio Garcia, who plays for Al Rayyan, was one of his team’s key players as he created 19 assists which makes him the leading assist maker of the season. Besides the number of assists, Garcia also managed to score 16 goals throughout the season. Sergio Garcia ended his first season in the QSL by being crowned the champions as he helped Al Rayyan lift the trophy after 21 years.

Xavi Hernandez Spanish superstar Xavi managed 16 assist over the season, as he comes in second place after his compatriot Sergio Garcia. Playing his first season with Al Sadd in the QSL, the former Barcelona man proved to be one of the teams key players. Xavi shined and led his team to achieve a lot of victories.

Rodrigo Tabata and Nam Tae-Hee Rodrigo Tabata of Al Rayyan, and Nam Tae-Hee of Lekhwiya come in fifth and sixth places after making 10 assist each. Tabata received the best player of the season award. He also got the award for the top scorer in the league jointly with Abdul Razak Hamedallah of El jaish, after they both scored 21 goals. South Korean sensation, Nam Tae-Hee also impressed with his performances for Lekhwiya in the last season and helped his team to a lot of victories over the season.

Sanjar Tursunov The Uzbek player, Sanjar Tursunov of Umm Salal comes in the seventh with nine assists for his team, who acquired his services in the last transfer window.