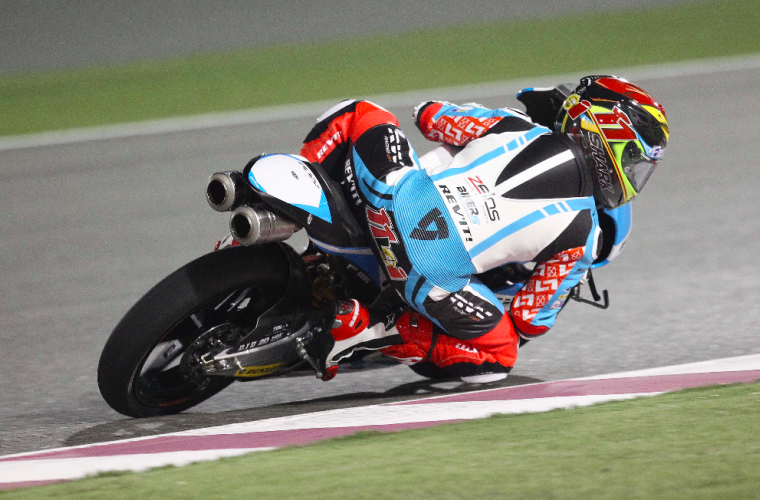 It was another productive day of testing for the Moto2™ World Championship at the Losail Circuit Sports Club. Many riders were hesitant to head out in the first session, waiting for conditions closer to race day on Sunday the 20th of March. This saw only 11 riders head out for the first session of the day. Unfortunately this did not include Axel Pons (AGR Team) who decided to sit out the second day of testing due to injury.

The second day of the Qatar Test also saw the debut of winglets in the Moto2™ class, although not in the conventional position. Dominique Aegerter (CarXpert Interwetten) had two downward facing winglets attached to the tail of his Kalex, these are believed to increase turbulence behind the bike and therefore disrupt any riders in the slipstream. Aegerter’s team, CarXpert Interwetten, have developed these in-house after running several wind tunnel tests. They are not the first team to experiment with disrupting the slipstream; back in 2014 Caterham Suter had designed the rear of their bodywork to perform a similar function although they did not have winglets.

Session two of the day saw both Jonas Folger (Dynavolt Intact GP) and Takaaki Nakagami (Idemitsu Honda Team Asia) under the two minute barrier and lead the session in first and second. Their times were topped in the final half an hour of the third session by Tom Luthi (Garage Plus Interwetten), the experienced Swiss rider producing a blistering 1’59.680, half a second faster than his 2015 Qualifying time. This time gave Luthi a solid 0.126s advantage over Folger who was second.

The German set a 1’59.806 to end second on the time sheets of the second day, his confidence with his new team and bike continuing to grow with each lap. His time was 0.144s faster than Sam Lowes’ (Federal Oil Gresini Moto2) best of the day, the British rider completing the top three thanks to several rapid closing laps. Focusing on consistency and race pace, Lowes continues to enjoy life on the Kalex and was inside the top three in all sessions of the second day. The top three were the only riders to produce multiple 1’59 laps, all three improving in the last session.

Fourth overall was Nakagami thanks to his 1’59.933 from the second session, the Japanese rider unable to improve in the final session. On the edge of the 1’59s was Alex Rins (Paginas Amarillas HP 40) who set a 2’00.079 on his 22nd lap of the last session to end the day fifth. The Spanish youngster is showing no ill effects from having much less private testing than many of the other top riders and has once again found his pace which helped him finish second in the championship in 2015.

The second day of the Qatar Test saw riders in the Moto3™ World Championship take to the track after the Moto2™ riders, the lightweight class avoiding the task of having to clean the track for the second day. 24 riders went out for the first session with top times roughly two seconds off what they had been.

In Jerez several of the Mahindra and Peugeot bikes were running winglets, these winglets were back in action for the Qatar Test. While many of the winglets in the MotoGP™ World Championship are to help reduce wheelie, the ones on the MGP3O machine are used to help provide down force in fast corners. It is still as yet unknown how effective the winglets are, but they are certainly visually striking.

Leading the day overall was Livio Loi (RW Racing GP) who set a 2’05.824 in the final session. This was not only the fastest lap of the day, but was also the lone 2’05 lap and the fastest lap of the test so far. Loi had been pushed down the timing sheets but a rush of fast laps at the end restored him to first. His time was 0.3s faster than the 2015 Moto3™ pole lap and under the circuit best lap, set by Masbou in 2014.

Once again Fabio Quartararo (Leopard Racing) was towards the top of the table, a 2’06.193 putting him 0.369s back on Loi’s time. Quartararo now enters his second season on the world stage, after a strong first year many are expecting him to challenge for the title but he will no doubt have some strong competition.

Moto3™ Junior World Champion Nicolo Bulega (Sky Racing Team VR46) may be one of his chief challengers despite being a rookie. The Italian completed the top three on the second day and was within half a second of Loi’s incredible lap. Bulega has never raced at Qatar before, but with Valentino Rossi as a mentor, there's no doubt he will have received countless tips and tricks for the track.

Times were tighter than ever in the top five as both Romano Fenati (Sky Racing Team VR46) and rookie Joan Mir (Leopard Racing) were 0.002s back on Bulega, the pair setting an identical lap time of 2’06.256. Mir and Bulega produced many stunning battles in the Moto3™ Junior World Championship in 2015 and with the pair now on the same bikes their rivalry looks set to continue in 2016.

Just outside the top ten was Maria Herrera (MH6 Laglisse), the fast Spanish rider showing well after her future in the World Championship looked to be in doubt.

Testing resumes for the final day at 15:00 Local Time on Sunday the 13th.