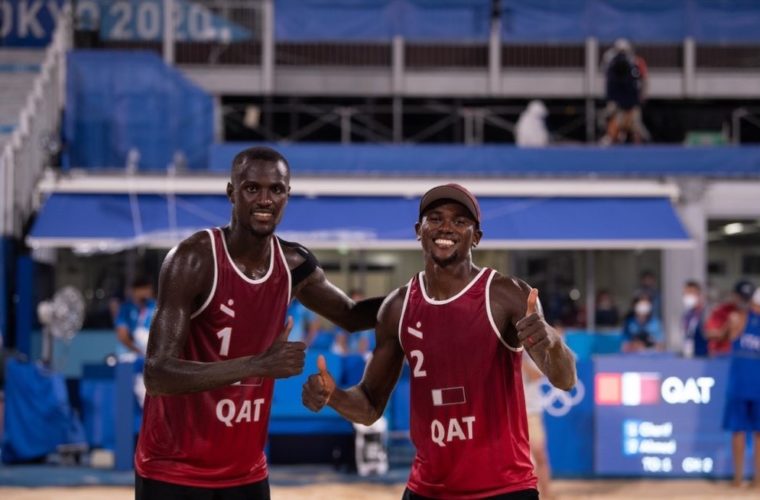 The Qatari beach volleyball team continued its victories in the Tokyo 2020 Olympic Games, as it achieved its second victory at the expense of Italy (2-0) on Wednesday, 28 July.

The result of the two halves was 24/22 and 21/13 in favor of the Qatari team. The duo of the team, "Ahmed Tejan and Sherif Younis" presented a good level during the confrontation.

The Qatari team topped the world rankings for the game, for the first time in its history, after the distinguished results it had recently achieved in various tournaments.

After the end of the match, the duo, Ahmed Tejan, and Sherif Younis expressed their joy at this victory, stressing their great desire to continue victories, especially that the understanding between them is an important factor in providing good performance and achieving victories.

The Qatari duo is awaiting a third and final match at this stage against the US team, which in turn won two victories in the tournament, and therefore the next meeting will be a decisive match.

On the other hand, the Qatar Athletics Team delegation arrived at the Olympic Village on Wednesday, 28 July, in preparation for the start of their participation in the athletics competitions, which will start on Thursday, 29 July. The Qatari players finished their preparatory camp, which was held in Takasaki with the participation of all players and the presence of the technical and administrative staff.

Today, 29 July, will also be decided for the men's shooting competitions, in which Qatari shooter Mohammed Al-Rumaihi will participate, who today participated in three preliminary rounds in the first qualifiers for the competitors on the Asaka shooting circuit, amid strong competition from shooters from different countries of the world. Al-Rumaihi performed well on Tuesday's rounds and performed well with a score of 72 points, while he was ranked first with 74 points.

On the other hand, Abdul Rahman Samba, the Qatari runner and 400m hurdles champion, stressed that the Tokyo Olympic Games represent a great challenge for him in his career as a runner.

The holder of the record in the 400m hurdles "46.98s", which he recorded in the French capital, Paris in 2018, added that he is looking forward to appearing in the best image, defending the ambitions of Qatari athletics in the biggest challenges, which is the Olympic Games Tokyo 2020.

The runner in the hurdles races stated that his goal is to honor his country and record a strong presence on the Olympic podium, which is his goal since the completion of the World Championships in Athletics in Doha, in which he achieved the bronze medal, recording "48.03 seconds" as his first world achievement in his career.

The Qatari champion saw the opportunity for him in the current Tokyo Olympics to ascend the Olympic podium, which represents a dream for any athlete, as he bets a lot on his mental and physical preparations that he has been doing in the recent period, including the camp period in South Africa and Turkey, in which he achieved the technical rate required for preparations for the event.