Tickets for AFC U23 available at Landmark Mall 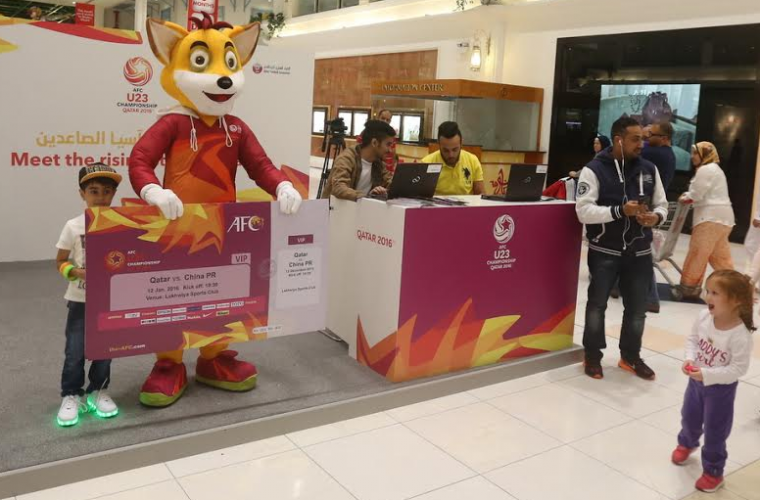 Tickets are now available for the AFC U23 Championship, Qatar at Landmark and Villagio Mall, as preparations ramp up for Asia’s second biggest men’s national team championship starting on January 12.

The launch of the event was attended by members of the local organizing committee, along with Najim the desert fox, who was recently announced as the official mascot for the tournament.

Speaking at the launch of the ticket booth Khalifa Al Haroon, Marketing and Communications director of the LOC said. “Launching at Landmark mall is a big step in the preparations for the AFC U23 Championship. The booth will ensure that fans have the best opportunity to get tickets to watch some of the best footballing talent in Asia.”

The tournament will be played in Doha and it will feature the 16 top U23 sides from Asia, including hosts Qatar and defending champions Iraq. The top three teams from the tournament will secure qualification for the 2016 Olympic Games in Rio de Janeiro.

The opening match of the Championship on January 12 will see Syria take on I.R. Iran at the Jassim Bin Hamad stadium (Al Sadd stadium) and hosts Qatar kick off their campaign against China PR on the same day, at 19.30 local time, at the Abdullah Bin Khalifa Stadium (Lekhwiya stadium) in Doha. The final will be played on the January 30 2016, also at Abdullah Bin Khalifa Stadium.

The affordable ticketing structure has been designed to make the tournament accessible to the local football fans and to attract families in order to ensure a lively and festive atmosphere in the stadia.

Tickets for all the matches are available online from the Qatar Football Association website: www.qfa.qa. Whilst you can also buy tickets from both Landmark & Villagio malls from 4pm to 10pm daily, furthermore fans will be able to buy tickets on match days at the tournament stadiums. - See more at: http://qsl.com.qa/en/News/view/10850/tickets-for-afc-u23-available-at-landmark-mall#sthash.9To1Utfp.dpuf