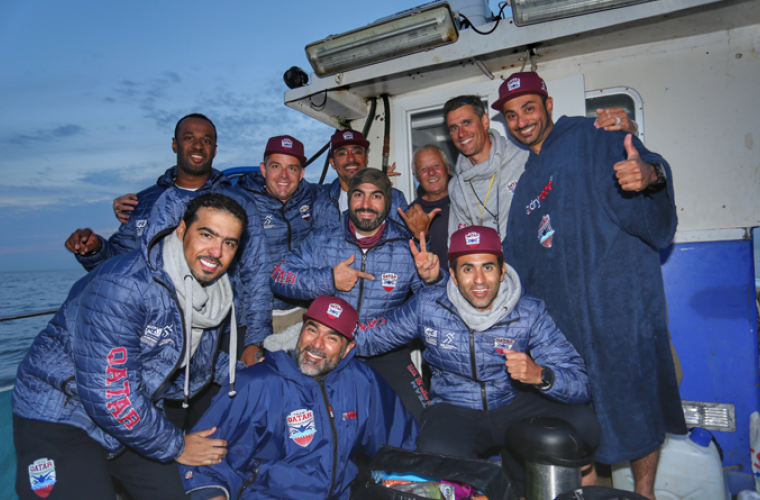 Team Qatar Channel Swim successfully made it across the English Channel on Saturday to go into history books as the first ever athletes from Qatar to take on this gruesome challenge, known as the Everest of open water swimming.

The team, made up of seven amateur athletes, kicked off their attempt from Folkestone near Dover on the English coast and covered a distance of around 48 kms in 16 hours and 34 minutes on relay basis, to reach the French coast near Wissant, a seaside commune between Calais and Boulogne.

Since 1875, only around 1500 solo swimmers and 765 relay teams successfully made it across the busiest waterway in the world, known for its cold waters, strong tides and a list of other hazards that include cold winds, waves, oil slicks and jellyfish.

What made the Qatari achievement more special, is the fact that none of the team members, aged between 34-52, are professional athletes. They are a group of endurance sports enthusiasts who work full-time in fields like medicine, engineering and marketing, but they were able to take time from career and family obligations to go through one of the most difficult physical challenges on earth.

When 52-year-old Dr. Faleh Ali, founded the team few months ago, he wanted to encourage the Qatari community to make practicing sport an integral part of their lives and to lead healthy lifestyles, by proving that age is never a limit and that a balance between family, career and exercising is possible.

“It’s a great honour to be a part of a team that made history today. Only few swimmers in the world choose to go through this difficult challenge every year. We worked hard for this over the past few months, and today we reaped the result. All the team members gave their best today and faced very difficult swimming conditions, but when we saw Qatar’s flag being raised at the finish point, we knew it was all worthy” Dr. Ali said.

“We dedicate this achievement to HH The Emir of Qatar Sheikh Tamim bin Hamad Al Thani and to the people of Qatar. We deeply thank our families who greatly supported us during the past few months, and of course, we also thank our gold partners, Al Asmakh Real Estate Development and BMI Fitness, without them it was not possible to achieve this” he added.

Each member of the relay team had to swim for an hour covering a distance ranging between 4-5 kms in water temperatures that reached as low as 15 °C, before returning to the boat for recovery which required eating special meals that helped the body to re-produce heat from inside. The order of the relay was pre-determined ahead of the attempt and could not be changed.

“The conditions were extremely difficult. We had to put an extra effort and push hard in order not to be pulled south by the strong currents. Sometimes we felt that we were not moving forward because of the currents, but at the end we did it, and it is hard to describe the joy of completing this challenge” Dr. Jamal Al Khanji described the conditions faced by the team during their successful attempt.

Throughout the journey, the team was accompanied by captain Pete Reed and his boat Rowena, both are certified by Channel Swimming Association (CSA), the organization responsible for observing and authenticating Cross-Channel Swims. An official from the association was also present during the attempt.

With Qatar facing a blockade from a number of neighboring countries since June of last year, Team Qatar Channel Swim wanted to send an important message to the world.

“We wanted to show the world the real strength of the Qatari people. When we face pressure, we fight hard to achieve our goals. We chose the English Channel Swim because it is one of the hardest physical challenges in the world, and we succeeded in crossing it despite the extremely difficult conditions that we have faced. It is a great honour to be part of this team” Dr. Mohammed Al Kuwari said.

When Dr. Khalid Al Jalham swam the final kilometers of the challenge and reached the finish point near Wissant, the reception was overwhelming.

“When people on the beach saw the Qatari flag, they were really happy and started to celebrate with me, they kept cheering me until I started to make the short trip back to the boat. It was an incredible feeling at the end of a very difficult challenge” Dr. Al Jalham explained.

“I am really honored to be part of this inspiring team. This challenge taught me that everything is possible. The main lesson that I have learned is that any challenge is like a project, having the right team and the right tools, producing the required effort in a specific order, help you reach your target and achieve great goals”.

“I have been through some difficult challenges before, that included scaling some of the world’s highest mountains with my friend Fahad Al Buenain, but the Channel Swim was completely different. It was extremely challenging. The cold waters and the strong currents required pushing yourself over the limit, I never faced anything like this before. At some point you feel that your body cannot take it anymore, but by being mentally strong you keep on going, and of course the support of everyone in the team was also crucial in this success.”

“It was a very difficult challenge, but we have made it thanks to good preparations, team unity and hard work. If you told me last year that I will be with a team crossing the English Channel, I was never going to believe it, but now it is a reality. The second half of the challenge was the most difficult, as we knew that we need to put in super effort in order not to be pulled away further to the South, to a point that it would have been impossible to get back again to the area near Calais.”

“It was an honour and privilege to watch the last swimmer of Team Qatar Channel Swim reach the shore of in Wissant in France. Swimming across the channel is usually a professional-athlete-only challenge, so for seven amateur athletes, who have full time jobs with families and commitments, to put the effort they did during the last nine months, to show this true dedication, to be able to grow both physically and mentally, to be able to push themselves to limits they have never thought possible, is truly inspirational. I hope that we have shown the people of Qatar, that they can dream bigger than reality and push themselves to achieve phenomenal things.”

Here are some tips from TQCS’s performance director Ryan Bowd to pushing your own limits:

1- Let your ambition outstrip your reality and then figure out how to overcome the obstacles.

2 - Choose something that excites (don’t choose something even if others are doing it, if it doesn’t excite you, as you’ll need the excitement to get you through the boring, dark or difficult moments along the journey to achieving it).

3 - Surround yourself with passionate and driven people to share your journey.

4 - Make a plan, identify all the areas where you need to develop your knowledge and skills to safely accomplish the goal.

5 - Remember that there will be set backs. Learn from them adapt and move forward. There is an old Chinese quote that sums this up (Our greatest glory is not in never falling but in rising every time we fall)”. 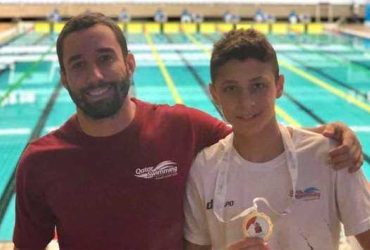