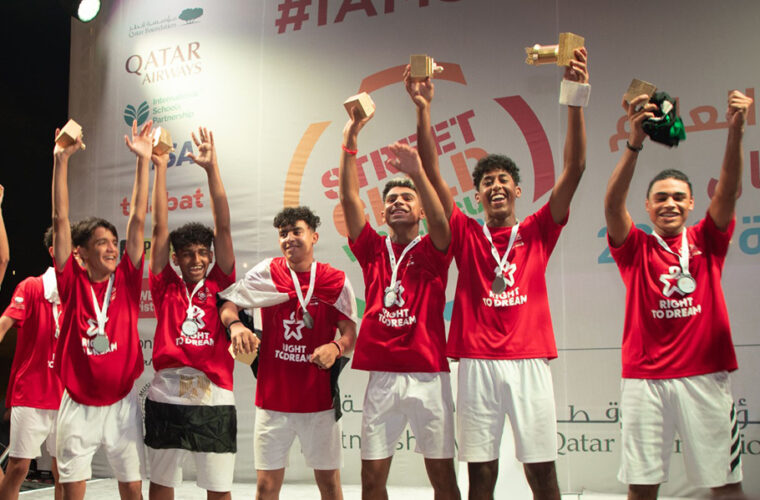 Emotions were high on 15 October 2022 as Team Brazil Girls and Team Egypt Boys were declared the winners of Street Child World Cup 2022 at Education City.

The World Cup-style tournament, which was just one element of the eight-day event held in partnership with Qatar Foundation (QF), brought together 28 teams from 25 countries – including 15 boys’ teams and 13 girls’ teams.

“Wow - what an evening. My most enormous congratulations go to Team Brazil Girls and Team Egypt Boys for their victories in tonight’s finals. It was a tournament of passionate determination, but at the same time, played with so much love and respect.

“This tournament is about much more than sport, however. This is about our young people using their platform to bring about change. Change is coming, and I could not be more proud of them. As they return to their communities and become leaders in them, we owe it to all of them to keep fighting to give them the opportunities which they deserve.

I am deeply moved by the spirit shown tonight which concludes a beautiful Street Child World Cup. Huge congratulations to everyone who has taken part and thank you for all that you have contributed to make the whole event so incredibly special. You are all somebody.”

The Street Child World Cup brings together grassroots footballers from all over the world, giving them a voice and platform to effect change in their countries. The young people are calling for fundamental human rights, including identity, protection from violence, access to education, and gender equality.

“We are thrilled to have won the tournament today and we can’t wait to celebrate as a team. I am proud to be from Brazil and I am looking forward to using my voice to inspire other young people from my country.”

“We are so happy to be the winners of the Street Child World Cup – it is great that all of our hard work has paid off. Our experience in Qatar has been unforgettable and we will be sad to say goodbye to all of our new friends from around the world.”

Alongside the tournament, the children joined art workshops and participated in child-friendly congress sessions to bring to light some of the adversities faced by vulnerable youth. The last day of the Street Child World Cup also included the General Assembly, the “Qatar Commitment” signing, a parade, and a closing ceremony.