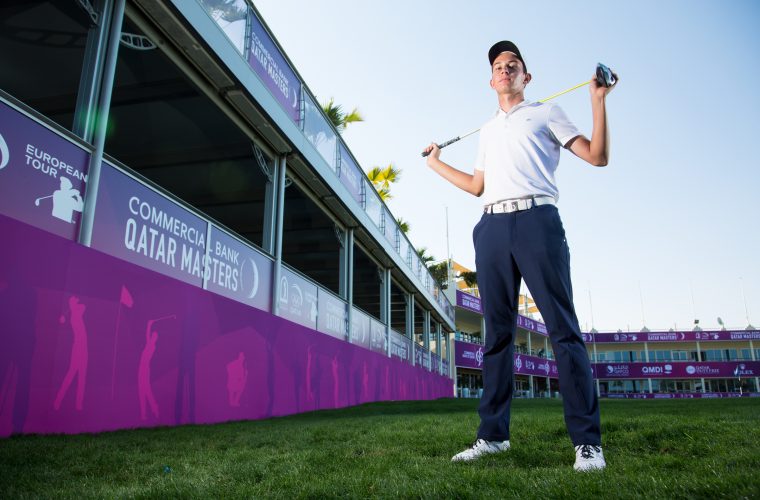 20 January 2015; Doha, Qatar:Jakub Hrinda will become the youngest-ever player to compete in the Commercial Bank Qatar Masters when he tees off in Wednesday’s first round at the age of 14 years and 305 days.

Already over six-feet four-inches tall, the Doha College student will join the likes of Chinese prodigies Guan Tianlang (2013 Masters Tournament) and Andy Zhang (2012 US Open) among the youngest players to compete in a European Tour event.

The left-handed Hrinda, who has a handicap of +2.6, earned his spot in this week’s 126-man field at Doha Golf Club by winning this month’s Qatar Open amateur tournament at the same venue, winning by a stroke from Thomas Strandemo, who plays college golf in Louisiana.

Hrinda won with an even-par total of 216 (71-73-72), although the towering Slovakian admits the biggest prize was a starting place in the 18th edition of the star-studded Commercial Bank Qatar Masters.

“I’ve been watching the tournament for a long time and I really wanted to play in it myself. It was really on my mind at the Qatar Open and I think that’s why I got off to a shaky start on the last day. I gave myself a chance, which is what I really wanted, and to close it out was great,” said Hrinda, who has taken a week off school to compete this week.

“It was really exhausting for me, though, because of all the mental preparation and so much stress around it. I was just really happy to win, so I don’t think it really sank in right away that I would be playing here. Two days later I started thinking about it and now to be here, with new Titleist balls on the practice range, it’s just great. It’s awesome.”

Hrinda has played most of his golf at Doha Golf Club with his father Daniel, who will be his caddie this week, while his mother Anna and sister Laila will provide further family support as the family’s tallest member tackles his biggest test so far.

Although he’ll be by far the youngest player in a strong field, he admits he knows the course as well as any pro, having played the Peter Harradine-designed layout regularly since his family moved to Qatar when he was eight.

“I know it inside out. I’ve played here countless times, so I think that gives me an advantage. They really step up the conditions and speed of the greens for this tournament and for the Qatar Open, but I think it only helps to have greens the quality they are now,” said Hrinda, who was born and raised in the Malaysian capital of Kuala Lumpur.

“Being tall, I hit it a long way for my age, but I really focus on trying to make everything strong, not just one thing. My ball striking right now is pretty good, so I’m happy with that.”

However, Hrinda is not setting any unrealistic targets as he prepares to compete in a tournament headlined by defending champion Sergio Garcia, Henrik Stenson and Justin Rose, three of the world’s top six, as well as South African stars Ernie Els and Charl Schwartzel.

Like Hrinda, Garcia is also among the top 20 youngest players to compete on The European Tour, having made his debut on the circuit in 1995 at the age of 15 years 46 days. Hrinda thinks the Spaniard has a good chance of retaining his title this week.

“Sergio Garcia always plays well and Henrik Stenson is always a good player. I’m hoping Ernie [Els] can play well,” said Hrinda, who plays his first two rounds with English duo Matt Ford and Matthew Nixon. “I think if Garcia can play as well as he did last year, he will do well again this year.”

Hrinda admits that Els, the four-time Major winner, and South African compatriot Louis Oosthuizen – not competing in Doha this year – are his favourite players due to their smooth, fluid swings and relaxed on-course manner.

“My favourite player would be Louis Oosthuizen. He didn’t come last year or this year, but he came two years ago and many times before. I would really, really love it if he came back,” Hrinda said.

“Ernie is back and he’s another favourite of mine. Last year I followed him. I also got to talk to him when he was playing in a Pro-Am. He’s a really nice guy and he took me to the side and walked with me for a couple of holes. That was an awesome experience for me.

“I just really like the way they both play, the way they swing. They’re really relaxed. I think that’s the way golf should be played. It’s just great watching Louis. Every time, I watch him, the way he plays, it affects you … I like everything he does.”

Hrinda speaks about the world’s top players in reverent tones, and despite appearing calm and composed, even he can’t hide the fact that he’ll suffer from nerves as he prepares for his European Tour debut.

“There’s only so much you can do. You can tell yourself to play your own game, but it really is new territory for me. I’ve never played with pros before, at this level, so hopefully I can get through it somehow, by just not thinking about it too much.”