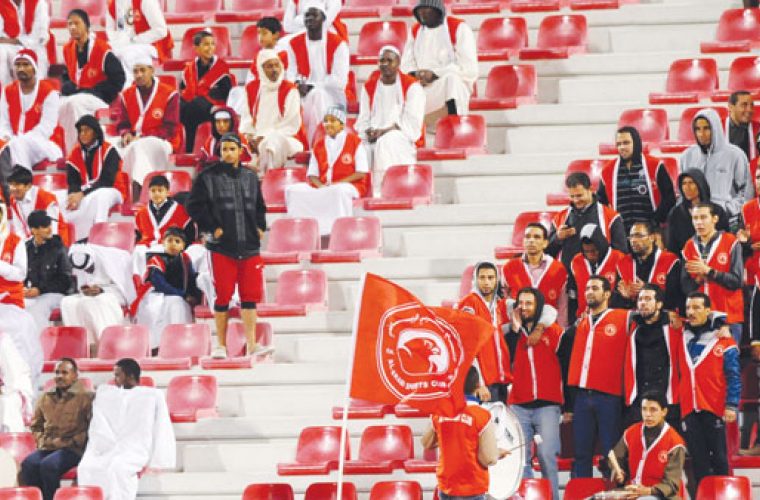 Qatar residents are reluctant to go to stadiums to watch football matches for a variety of reasons including dearth of time and live broadcast by satellite channels, a study has found.
The finding was the result of a survey conducted by the Ministry of Development Planning and Statistics (MDPS), in co-operation with Qatar Football Association (QFA) and the Sports Statistics Technical Committee in Qatar.
The survey included 1,079 persons (males and females) categorised under three age groups: less than 24 years, 24-35, and 35 plus.
The survey tackled seven major themes related to the potential reasons behind audience reluctance to attend football matches.
A number of sub-causes fall under the category of each core theme. The seven major themes are: personal, organisational, technical, service, climatic, audience, and TV broadcast.
The outcomes indicate that 65% of Qataris who participated in the survey did not attend any match at stadiums during the previous football season.
According to the survey, 67% of respondents think that time shortage is the main reason hindering their attendance, followed by lack of desire (51%). Some 45% of females mentioned that the stadiums are not well adapted for them.
Others, 55% and 61%, respectively, of respondents point out that the family objection, traditions and customs are not important reasons for them to turn away from attending matches at stadiums.
There has been no big differences between the three age groups’ opinions on the importance of personal causes as being factors contributing to their reluctance to attend matches at stadiums.
Around 60% of respondents pointed out that the match schedules during the week days represented a significant obstacle, followed by the organisation of matches at distant stadiums (55%).
In addition, 50% indicate that the audience’s annoying behaviour represents an obstacle to attend matches at stadiums.
Besides, 69% of respondents agree that traffic congestion is a major reason for audience to turn away from stadiums.
Some 60% of respondents indicated that the absence of local football stars reduce their enthusiasm to go to stadiums, whereas 50% said that the low technical level of clubs is one of the reasons for them to turn away from stadiums.
Almost 65% of respondents indicated the importance of facilities (mosques, restaurants, parking), and 65% point out that the security measures do not constitute an obstacle in their way to attend matches at stadiums.
All the age groups’ opinions on these factors show slight difference regarding the level of importance of each one.
Regarding the unpredictable weather (hot, humid and windy, dusty), 72.8% indicated that it plays a real part in non-attendance at stadiums, whereas 10.6% said that the weather unpredictability is not an obstacle to them to attend matches. There are no clear differences between the opinions of the three age groups regarding the impact of this cause on their attendance at stadiums.
Around 69% of respondents said that the phenomenon of paid fans is a significant reason for audience to turn away from stadiums.
Some 77% of youths in the age group (less than 24) pointed out the weak ties linking the sports clubs supporters.
In the meantime, 65% of respondents confirm that the satellite sports channels heavily contribute to audience reluctance to go to stadiums, whereas 17% said that this is not a major reason. Some 71% of the young age group (less than 24) indicated that the sports channels are a crucial reason behind their reluctance to attend matches at stadiums.
MDPS pointed out that this survey’s detailed results would be discussed by the Sports Statistics Technical Committee, which include all the bodies concerned with the study of the results, to identify whether there is a need for conducting further surveys.