Sun down, lights out: battle commences in Qatar 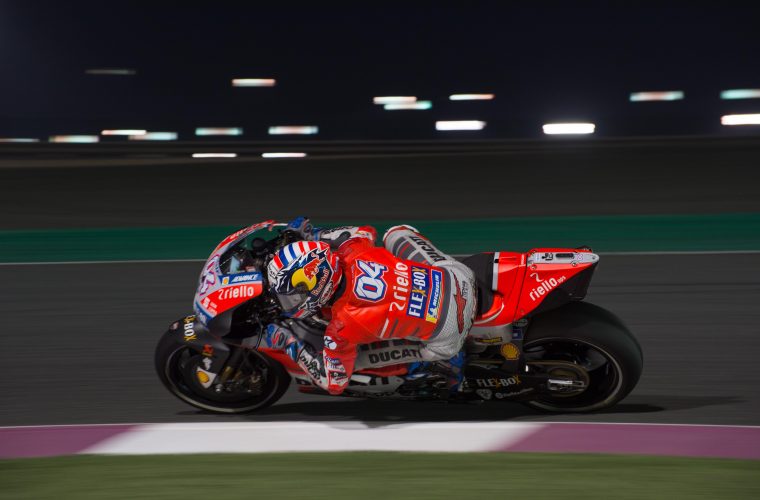 It's what we've all been waiting for and it's nearly here - 2018 is about to hit the rev limiter for round one with the Grand Prix of Qatar in association with Visit Qatar from 16th to 18th March 2018.

Ten years have passed since the desert oasis of Losail International Circuit hosted the first floodlit MotoGP™ race. In that time, much has changed but the core of the sport has remained the same. Foundations laid then and since have created one of the most spectacular eras of Grand Prix motorcycle racing since the Championship began in 1949 and, lucky us, another season of that rollercoaster is about to begin. Who’s your money on?

On the face of it, it’s hard to bet against reigning Champion Marc Marquez (Repsol Honda Team). The rider from Cervera is now a six-time World Champion and he’s taken four premier class crowns in five years. Qatar is usually a more difficult venue for Marquez and Honda, and although both will want to begin another title defence on the offensive and at the front, it may be a case of good things come to those who wait for the number 93 and teammate Dani Pedrosa, who makes his 200th premier class start – as well as for HRC test rider and Independent Team challenger Cal Crutchlow (LCR Honda Castrol).

Ducati begin the season with the statistics stacked the opposite way. Losail is a venue that suits the red machines, and Andrea Dovizioso has proven that with a good number of podiums in recent Qatar GPs. But that was then, and this is now. ‘DesmoDovi’ is a contender from the start in 2018, and it’s not just the podium that Borgo Panigale have in their sights – it’s the top step. That would make for a big opening statement from the Italian on the Italian machine. His teammate Jorge Lorenzo will be looking for similar headlines in his second year in red, too – and it’s his pole record that still stands from 2008 when he was a rookie in the premier class. With three wins to his name at the venue in MotoGP™, Lorenzo is the second most successful rider at the track on the premier class grid this year - added to another three wins in the lower classes.

Who’s the first? The ‘Doctor’. Movistar Yamaha MotoGP’s Valentino Rossi has four MotoGP™ wins at Losail to Lorenzo’s three, and the rider from Tavullia always has some serious form for race day pace in the desert. But it’s been a difficult preseason and latter part of 2017 for the Iwata marque and questions remain – can Rossi answer them? And what of teammate Maverick Viñales? After an awesome preseason ahead of 2017 and two wins to begin the year, the battle became more uphill. Has that been turned around?

Saud Al Attiya, Losail Circuit Sports Club President stated, ‘The Grand Prix of Qatar is always one of the highlights of the season, not only for being the very first round of this exiting championship but also for our night racing, making our event one of the most exclusive racing weekends of our calendar.’

‘Our event is also one of the most anticipated races of the season but this 2018 is a milestone and a very special event for us as it marks 15 years of being the Home of Motorsport in Qatar. We are very excited to celebrate this Anniversary in association with Visit Qatar, teams, riders, spectators, fans and all the international motorsport community as we are planning several activities for all those who come to visit us’’ ended Al Attiya.

Rashed AlQurese, Chief Marketing & Promotion Officer at Qatar Tourism Authority commented, “Over the past 14 years, MotoGP has cemented its position as a key event on Qatar’s sporting and tourism calendars. Through our partnership with LCSC, we hope to help raise the event’s profile internationally to spread Qatar’s message of welcome to the world and attract more visitors.” He added, “We look forward to welcoming all the riders in Doha and wish them all the success over the coming weekend and a great international race season ahead.”

Tickets are still available for the Grandstand, Losail Club Grandstand, Losail VIP Club and VIP Village for 250, 2.500, 3.500 and 4.500 Qatari Riyals respectively. They can be purchased at Q-Tickets, Virgin Megastore’s in-store or online platforms and at the Losail Circuit Sports Club during the week of the event. Remember that those who want to live the action from main straight and watch the start, finish and podium ceremonies of the races, there will be a 3-day grandstand ticket with access to the Fan Zone area at the grandstand with entertaining activities for all the family (go-karting, camel riding, falcons, Arabic coffee etc) and children under 11 years old accompanied by an adult will have free access to this grandstand.