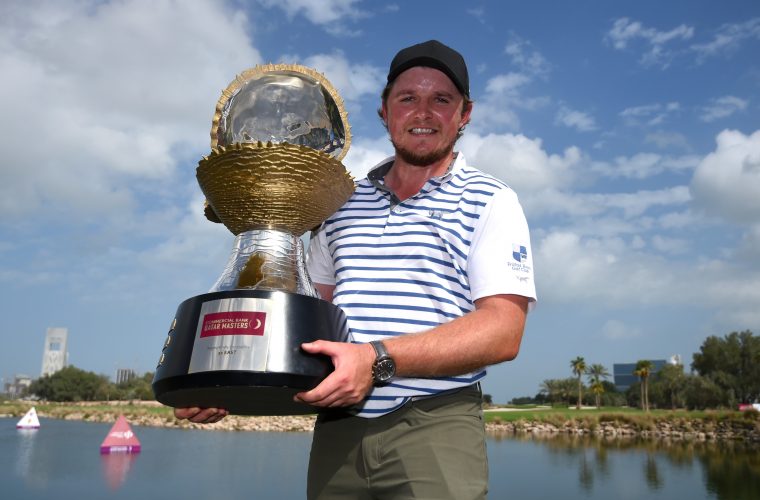 Eddie Pepperell survived a late scare from his friend Oliver Fisher as the Englishman produced a final round performance of confidence and poise to claim his maiden European Tour victory at the Commercial Bank Qatar Masters.

It all came down to the final hole between the two compatriots and playing partners, as Fisher had a birdie opportunity to force a play-off, but for the most part Pepperell had appeared to be cruising to a victory in the manner of an experienced champion.

“It went all the way to the last hole which, after my front nine, was what I was hoping for on the back nine and gave myself a lot of good chances, but there were just too many bogeys today – four in total – so you’re never going to win a tournament making that many mistakes on a Sunday. But at least I pressed him all the way,” said Fisher.

“When Oli birdied the 17th that was when it really caught up with me that I was only one head,” stated Pepperell. “I was in my own zone; I knew I had a couple of shots of a lead but Oli did great. It was a tough front nine for him and I had to stay right in my own way and out of the two guys’ way because they were struggling a bit and it’s sometimes easy to get dragged into that.”

While the challengers to the throne were to-ing and fro-ing in front of him on the course – multiple tour winners Grégory Hayret, Gonzalo Fernandez- Castaño, and Pablo Larrázabal among those ratcheting up the pressure – the 27-year-old Pepperell appeared focused, serene, and in control.

He opened up with eight successive pars before back-to-back birdies at the ninth and tenth edged him three clear, but Fisher – who had suffered a three over front nine and seemed out of the contest, made an almighty comeback.

When he birdied the 16th and 17th, it was a one-shot game, and Fisher had a ten-footer for a birdie and extra holes at worst. It slipped by, however, and the 29-year-old had to sign for a one under 71, while Pepperell knocked in a two-foot par putt for a two under 70, an 18 under total and a one-stroke triumph.

Were you out on the greens this weekend to catch the 2018 Commercial Bank Qatar Masters? Drop us a line in the comments below and tell us your thoughts! Also, don’t forget to like and share this article!