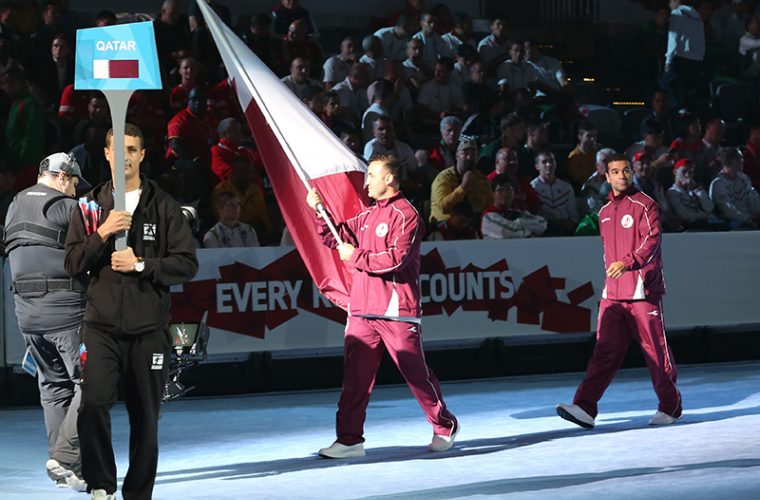 Following the official draw which took place earlier in the day the dramatic opening ceremony was fitting of the event’s caliber, with Doha hosting the world championships for the first time in the Middle East’s history. In coming days the global boxing elite from AIBA’s five confederations will fight to be crowned world champions and for one of 23 qualifying spots to the Rio 2016 Olympic Games with local fans encouraged to .

“On this occasion, we offer our sincerest thanks and gratitude to His Highness Sheikh Tamim Bin Hamad Al-Thani, the Emir of Qatar, for his great interest and infinite support. His Highness has had an incredible impact on Qatar winning the bids to host numerous international events and championships in various sports.

“We also offer our utmost thanks and gratitude to President of the Qatar Olympic Committee His Excellency Sheikh Joaan bin Hamad Al-Thani, for his unwavering support and for all that he has given to Qatari Sport, as well as for his steadfast ambition to raise its profile around the world.

“I would also like to take this opportunity to express our gratitude and thanks to the International Boxing Association (AIBA) for their confidence in Doha’s ability to host the 2015 World Boxing Championships. Our teams have spared no effort to ensure that this edition of the World Boxing Championships, which will hosted for the very first time in the Middle East, will be exceptional in every way.

“There is much to gain from hosting such a high-profile world championship event. Such events promote Qatar around the world and reaffirm its readiness to successfully organize sporting events. Our athletes will also benefit greatly from these World Championships as they will gain invaluable experience after competing with elite boxers from around the world.”

“Doha is truly a sporting city, with an excellent record of hosting major events such as this. Qatar clearly understands the importance of promoting sport as a tool to increase the visibility of this wonderful city, and to develop its sporting potential. I would like to congratulate the city on its beautiful venue, as well as the level of organisation around the event, which has been first class.

On behalf of the global boxing family I congratulate His Excellency Joaan bin Hamad bin Khalifa Al Thani, the president of QOC and Dr Thani, the Secretary General of QOC. I also thank the president of the Qatar Boxing Federation, Mr Yousuf Ali Al Kazim, and his whole team for organising this event on the highest level. The 2015 AIBA World Boxing Championships will be broadcast live around the world to the delight of all more than 500 million boxing fans.

It brings me great pleasure to see the competition take place in the Middle East for the first time Qatar, and the sport of boxing itself, will benefit for years to come from staging the AIBA World Boxing Championships” commented Dr. Ching-kuo.

Showing the significance of the event as a qualification for the Olympics Rio 2016 a video message from Thomas Bach, IOC President stated:

“These World Championships are particularly important. You will be doing your utmost to win the world title. But you will also do your utmost to obtain one of the 23 places for the dream event for any athlete: the Olympic Games 2016 Rio de Janeiro.

“There is no doubt that we can count on the determination of all of you to give your best performance possible. The people here in Doha will be delighted as well everyone watching you around the world on TV.”

For sports fans from all nations across Qatar the action and once-in-a-lifetime opportunity for all to witness the best boxers on the planet go head to head right here in Doha starts tomorrow and lasts until Thursday 15th October. The first session of afternoon bouts start daily between 2pm and 3pm with an evening session between 7pm and 9.30pm. Preliminaries rounds will take place from Tuesday 6th October, with quarter-finals scheduled from Saturday 10th October. For the latest timings and official draw and ticket information please visit: http://www.boxing2015.qa

Tickets are priced between QR10-50 and can be purchased online at https://tickets.virginmegastore.me, and in Virgin Megastores in Villaggio Mall and Landmark Mall, as well as at the Ali Bin Hamad Al Attiyah Arena throughout the Doha 2015 AIBA World Championships between 5-15 October. For more information, please see http://www.boxing2015.qa.