The action-packed finals of the 8th Schools Olympic Program (SOP) concluded on Friday, 20th March with 3,126 students from 230 schools across Qatar competing in the finals of the yearly program. The tennis finals took place on the 18th March in the Khalifa International Tennis and Squash Complex while the final competitions of all other sports took place in the iconic Aspire Dome. 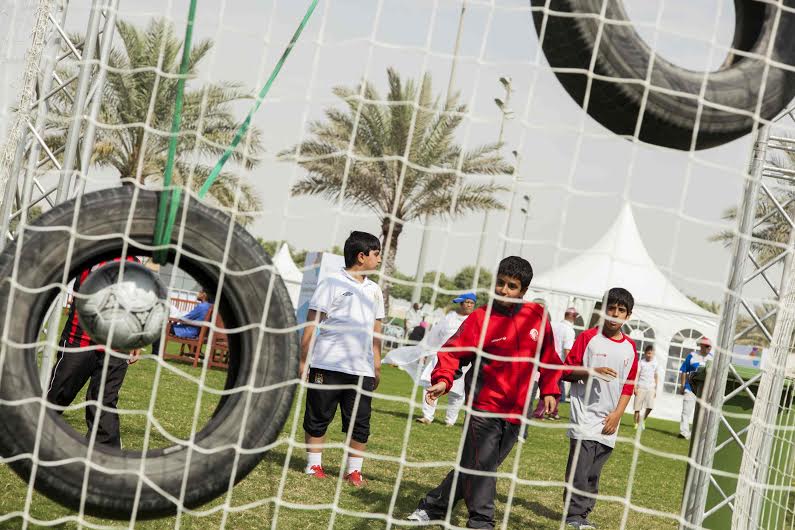 The SOP was founded as a legacy of the huge success of the 15th Asian Games host in Doha in 2006, and consists of multisport competitions among schools in Qatar for students aged 5 to 18 years. Sports included in the Program are Tennis, Shooting, Athletics, Handball, Volleyball, Table Tennis, Basketball, Football, Gymnastics, Fencing, Swimming, para-athletics and para-table tennis. This year’s Program saw Taekwondo added, bringing the total number of sports to 14.

“It has been a pleasure to see the enjoyment, competitive spirit and sportsmanship of so many Schools Olympic Program finalists over the last two days. We have seen here today not just the culmination of the yearly Schools Olympic Program but the fruits of 8 years of success and incremental improvement. We are extremely proud of our student athletes and teachers and we look forward to the continued success of the Program in future years. Sport is a vital part of education and the Schools Olympic Program aims to spread the Olympic values, develop healthy and responsible members of society and ensure that sport becomes an integral part of everyday life.”

On 19th March, 1,395 female athletes from 112 schools from around the country took place in the finals of the 14 different sports included in the SOP. The excitement continued on the 20th at Aspire Dome where 1,731 male athletes from 118 schools took part in the fun-filled finals while spectators and the public enjoyed the various activities organized by the sponsors.

“This is the first time I take part in the Schools Olympic Program. It was so much fun and I’m still in disbelief over my win! It was a very tough final and so I’m incredibly happy to win. I’ve been taking part in the 10m Air Pistol event for two years and one month now and the SOP has given me the opportunity to win my first medal while my friends and coach cheered me on.”

The SOP has shown tremendous growth over the last eight years, growing from 7,000 participants from 300 schools in its inaugural edition in 2007-2008 to 29,319 students from 544 schools in this year’s edition. The SOP aims to introduce students across Qatar to sport at a grass roots level, educating them through the Olympic value and ensuring that sport will become an integral part of their future lives.

“We have been participating in the Schools Olympic Program since 2007 and every year I have witnessed first-hand how the Program keeps growing, developing and improving. It’s amazing to see more students participate each year and more sporting disciplines added – so the Program becomes more complex yet its organization gets better every edition which is remarkable. Our students are always happy to take part in the SOP and we are too as it bolsters their passion for sports and gives them self-confidence. I have high hopes for coming editions of the Program which will no doubt continue to offer more to students across Qatar.”

The SOP also serves as the first level on Qatar’s sporting pathway and the identification and development of young talent is a key objective.Former participants in the program include World Indoor High Jump Champion, Mutaz Barshim, Rahma al-Dulaimi, who represented Qatar in last year’s Youth Olympic Games, and Mariam Farid, the young, up and coming hurdler, who this week won silver in the 4th GCC Women’s Games in Oman.

Commenting on the success of this year’s Program, SOP Director Mohamed al-Fadala said:

“One of our main objectives for this year’s Schools Olympic Program was to increase student participation and to this end we have been successful as we have almost 30,000 students who took part this year. This is a great achievement and we hope to reach out to more young people in the coming years and instil in them a love of sport and a cornerstone of a healthy life.”

The Program’s various sponsors and partners organized a list of activities on the side-lines of the finals to engage the public that packed the halls of Aspire Dome on Friday. Activities aimed to educate and inform the public, such as Maersk’s booth on their diabetes awareness program and the International Centre for Sport Security’s educational booth aimed at informing the public on the Olympic Truce. National Federations also organized activities during the last day of the finals, such as the Qatar Sailing and Rowing Federation, which set up a rowing machine open to all.

With a new theme each year, the SOP’s theme for this edition was “Sport & Peace” which saw the Program partner with Reach Out to Asia – an NGO working to achieve basic, quality education for children throughout Asia and the Middle East.

In keeping with this year’s theme the QOC has invited 20 students from Georgia to attend the finals of the SOP, meet Qatari students and share sporting experiences. They will also have the chance to tour Doha’s state-of-the-art facilities and cultural sights, ensuring an interesting and educational experience. This comes in light of the Memorandum of Understanding signed between the Georgian Olympic Committee and QOC.