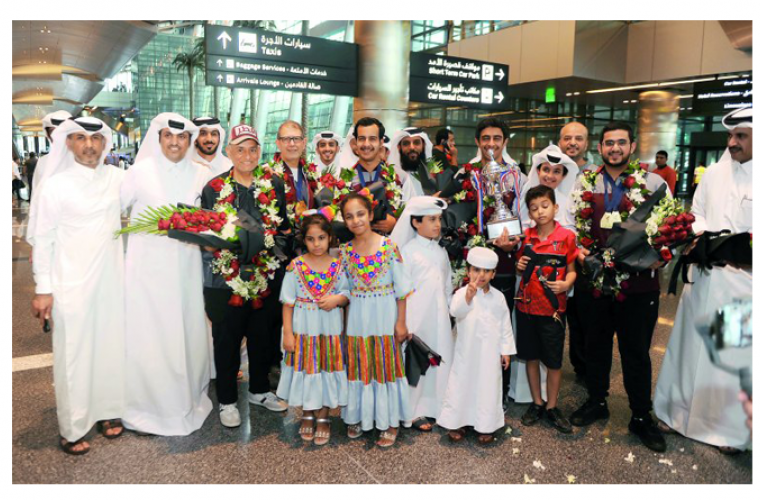 Qatar’s young bowling team which won the Overall Boys title at the 2018 World Bowling Youth Championships in the US yesterday received a rousing welcome from fans and officials at the Hamad International Airport.

Qatar Bowling Federation (QBF) officials along with a large of number of fans accorded a warm welcome to the victorious team.

The youth team shone at the event by bagging two gold medals in the boys category, one in individual event and the other for a team contest, and went to bag the overall title.

Right handed Qatar’s Ghanim Aboujassoum had a perfect game during the singles in the All Event on Friday at Thunderbowl Lanes to clinch the gold.

Aboujassoum then teamed up with Jassim Al Muraikhi, Jassim Al Deyab, Aboujassoum and Mohammed AlMerekhi to give Qatar the gold in the boys team event.

Aboujassoum said the competition at the championship was fierce but some splendid showing helped him and the team to come on top.

“Winning the gold medal was not easy. It was a tough championship, but the hard work put in by us over the years came handy,” Aboujassoum said.

Coach Pedro Merani, who guided the team to the gold wining feat, was delighted by the success his boys achieved in Michigan.

Merani said a decade-long investment by QBF in youth development programmes is paying off.

“This programme started 10 years ago. The winning bunch of players have been training for the last seven years. So this is the fruit of seven years which has helped us to win the championship,” Merani told The Peninsula.

“Our goal was to win a medal in Michigan but we ended up winning two gold medals, so the second medal was a bonus and the cup for overall winner was an added achievement,” said the coach.

Merani explained that Qatar youth teams have been dominating bowling championships in the Middle East region since 2012.

“In the school championships, Arab youth and other team events, we have been winning almost everything on view. Our next target was to win a gold medal on the world stage. So this medal at the youth was very much due,” Merani said

The next big challenge for the Qatari players is this month’s Asian Games in Indonesia.

“From two weeks time we are going for the Asian Games, It will be a tough challenge, but we are ready,” Merani said.

Merani said the Michigan event was part of the preparation for the continental championship in Indonesia.

“We have been preparing for the Asian Games for the last one year and the youth championship served as a good exposure for the boys,” he added.

Merani said for the winning quartet the Youth championship in the US was the last one they were eligible to take part as youth as they have now graduated to the senior category.

On the future plans Merani said that his focus will now be on another bunch of younger players.

“Hopefully we will have the same amount of success with the new youngsters. We need a lot of time to get the necessary results. So it is a combination of lot of factors,” Merani said.

Merani also thanked the QBF for reposing their faith in him for the last 10 years and waiting patiently for the results.

“The gold medals are fruits of lot of hard work put in by this youth who started at the age of 12, seven years back. They are enjoying the fruits of their hard work in the form of gold medals,” he said.