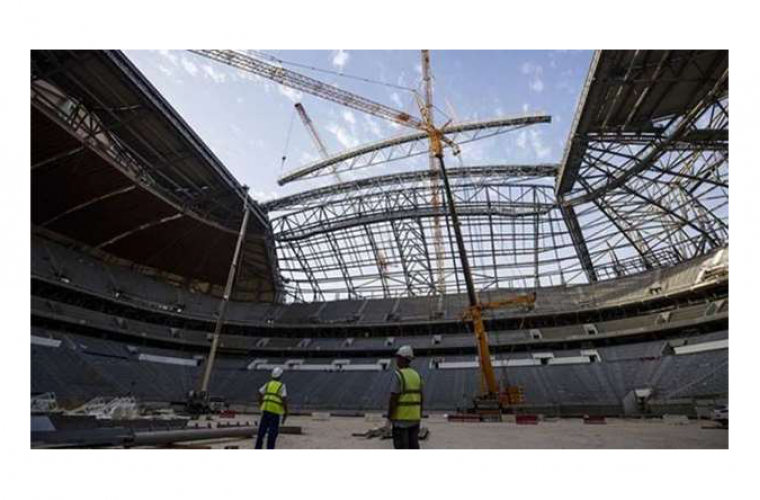 The Supreme Committee for Delivery & Legacy (SC) has said the construction of Al Bayt Stadium – Al Khor City, a proposed semi-final venue for the 2022 FIFA World Cup, has taken another step forward as work began on installing the venue’s retractable roof.

Once fully assembled, the roof will weigh around 1,600 tonnes – the equivalent of almost 380 medium-sized motor cars. It will be possible to close the roof at the touch of a button, in a three-phase movement that takes approximately 20 minutes, according to a report on sc.qa.

Each roof truss measures 94.4m and weighs between 82 and 104 tonnes. Each truss was fabricated into eight pieces at the workshop, transported to site and welded together at a dedicated area outside the stadium before being lifted into place.

The lifting of the roof trusses is done only when there’s little or no wind, taking approximately three hours, and can be done every two to three days.

The lifting of the roof trusses is done only when there’s little or no wind.

“This structure will allow more flexibility in lighting and climate conditions within the stadium, making it fit for purpose all year round,” said Dr al-Hajeri. “Installing the roof structure is a significant milestone as it completes the major lifting required on-site and means the big cranes can soon be removed.”

Designed in the style of a traditional Bedouin tent, Al Bayt Stadium – Al Khor City will have a capacity of 60,000 during the World Cup. Post-tournament, the capacity will be reduced to approximately 30,000, with parts of the stadium donated to countries in need of sporting infrastructure.

The upper concourse of the stadium will be converted into a hotel, while a shopping centre and branch of Aspetar, the leading sports medicine facility, will also be incorporated into the structure alongside entertainment and shopping centres, multipurpose halls and other venues. Parks and greenery will also form an integral part of the surrounding precinct.