Roman the gladiator puts PSG to the sword 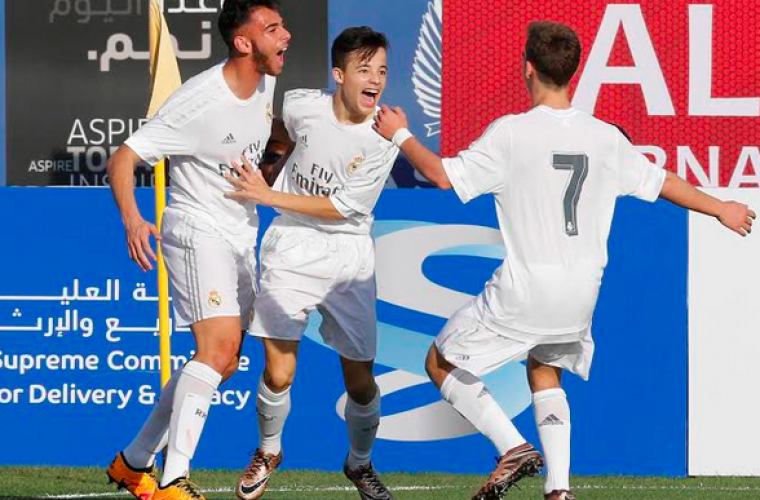 When the draw for the group stages was made, this was the match that captured the imagination. Two of world football’s biggest names going head-to-head, with the winners taking a giant step towards the knockout phase. And, from the first whistle, both sides seemed to register what was at stake, with no quarter given as the contest got underway.

Real were first to settle, with Jordi Merlin producing some wing wizardry to create an early chance for Ismael Lohoba after crossing from the left, but the Spanish forward was unable to control, and the ball cannoned narrowly wide.

With five minutes on the clock PSG created a fine opportunity of their own, when Azzeddine Toufiqi sent Moussa Diaby clear through the middle. Keeper Francisco Pujante did well to touch the ball wide for a corner, when a goal had seemed the more likely outcome.

Madrid quickly made PSG pay for their profligacy as, on 10 minutes, they took a deserved lead. The impressive Alberto Garcia cut in from the left and supplied Adrian Roman on the edge of the area, who controlled before hammering home into the top left corner.

The French youngsters were almost back on even terms within minutes, as Theo Epailly’s dangerous low corner from the right was touched on by Metehan Guclu at the near post, almost eluding Pujante, who only just managed to prevent the ball from squirming through his grasp and over the line.

With 20 minutes gone, the contrasting styles of the two sides were becoming apparent, with Los Blancos relying on guile and technique to retain possession and push forward, while Les Parisians favoured a more direct, high-energy approach.

This approach almost paid off when Boubakary Soumare smashed a low drive from 25 yards out, forcing Pujante to dive low to his left to divert the ball for a corner.

Madrid should have been two up moments later, when a sumptuous through ball from influential midfielder Elliot Lopez found Garcia. He twisted and turned his man on the edge of the area, before rolling his effort beyond the right-hand post when he might have done better.

The Spaniards were by now well on top, and were unlucky not to extend their lead after 25 minutes, when Lopez’s lethal in-swinging corner from the right was met forcefully by captain Adrian Barquilla, whose terrific header slammed against the woodwork and clear.

Despite PSG’s best efforts to put their opponents under pressure, Real’s defence remained resolute, and Paris had Thomas Chesneau to thank for keeping them in the game on 33 minutes, the keeper saving smartly from Lohoba after the forward was set free by Lopez.

Respite would brief however, as Real doubled their lead four minutes later. Full back Gorka Cudola produced a wonderful chipped pass from the halfway line wide on the right, allowing Lohoba to run clear and fire home.

Within minutes Los Blancos were three goals to the good, with Roman’s first time, side-footed effort finding the bottom right corner after a neat run and cutback from Garcia on the left. Although the smallest player on the pitch, the diminutive striker’s technical mastery was proving too much for the French defence.

Madrid were carving PSG open at will, cancelling out the French side’s attempts to press, and then breaking at speed to wreak havoc in the opposition defence. Les Parisians will have been relieved to hear the half time whistle, and could count themselves lucky to be only three goals down.

PSG withdrew defender Tom Flamant for Yacine Adli, and the substitution initially helped counter Madrid’s dominance in the centre of the park, as the tall midfielder began to display his impressive range of passing. The Frenchmen began the second period full of intent, with a series of dangerous crosses into the area testing Madrid’s backline.

However, the Spaniards held firm and extended their lead on 54 minutes, after Lopez won the ball on the right before feeding Roman with an impudent back heel, who completed his hat-trick with a minimum of fuss.

To their credit, PSG refused to lie down, and almost found an instant response, with Epailly firing home from the right of the area after latching on to a through ball from Adli, only for the effort to be ruled offside.

With 15 minutes remaining the French were awarded a penalty after Moreno was adjudged to have fouled Epailly. Pujante was once again Real’s saviour, diving low to his left to keep out Guclu’s spot kick. PSG continued to search for a consolation goal, but could find no way through a supremely disciplined – and talented – Madrid side.

The reigning champions had been given a chastening lesson in technically accomplished, possession-based football, and they now have it all to do if they are to retain their Al Kass crown. In contrast, such was the majesty of Real’s performance that, if they can maintain this level – no easy task given the demanding fixture list – they will believe they can go all the way.