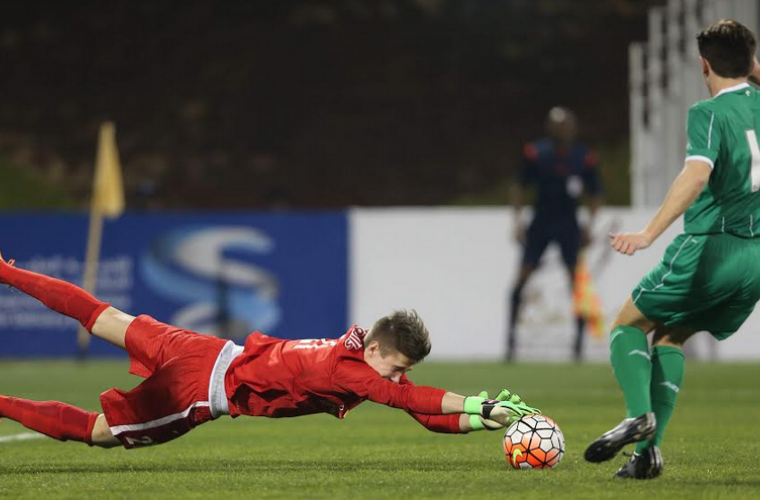 Red Bull Salzberg emerged triumphant against Celtic in the final match of a gripping opening day at Al Kass 2016, following a closely fought contest that could have gone either way.

The Austrians got the game underway, but it was the young Scots who should have taken an early lead. With just a minute on the clock, Michael Johnston fed strike partner Ciaran Diver through the middle, but his deft side-footed effort was well saved by keeper Felix Wilfing low to his left. It was the only clear-cut chance of the opening 10 minutes, as both sides worked patiently to find their rhythm.

However, the understanding between Celtic’s front two was becoming apparent, and they combined well once again on 12 minutes, with Wilfing bravely saving at the feet of Diver following Johnston’s accurate low cross from the right.

On 14 minutes, Salzburg fashioned their first real opportunity, when the classy Can Cakir gathered the ball 30 yards out before smashing a curling effort just beyond the top left corner.

With both teams seemingly well matched, chances such as these were at a premium. Instead, a fascinating tactical battle ensued, particularly in midfield where Red Bull’s Domonik Stumberger and Celtic skipper Lewis Bell vied for supremacy.

The stalemate was broken just after the half-hour mark, when Red Bull’s Kanan Kerim embarked on a strong run through the middle before threading a pass into the path of Abdelahim Montie. The powerful number nine made no mistake, taking the ball in his stride before slotting home coolly from close range.

The opening goal sparked a spell of dominance from Salzburg, and the young Austrians’ attacking play became increasingly coherent as half time approached. In response, Celtic occasionally resorted to a long-ball approach in an effort to bypass the midfield, to the evident displeasure of striker Johnston, who exhorted his teammates to retain their tactical composure.

Stumberger went close with a long-range effort shortly before half time but, in keeping with a rather low-key opening period, it did not test Celtic keeper Aidan McAdams.

The Red Bull team were out early for the second half, and quickly demonstrated that they remained in control of the contest as play got underway again. Their well-organised defence, led by dominant captain Luca Meisl, was rarely troubled by the Bhoy’s frontline, and it was the Austrians who continued creating the better chances.

On 55 minutes, number seven Keiran Campbell was withdrawn in favour of Christian Antoniazzi, as Celtic sought to inject greater urgency into their approach play. But it was Salzburg who showed more fluency in attack, keeping possession well as they worked to prise open the Scottish defence, with Cakir going close from distance just after the hour mark. Montie remained a constant threat, and on 70 minutes he notched his second goal, his low drive powering into the left-hand corner after Celtic had failed to clear their lines.

It was already clear, though, that the Bhoys team possessed a fierce determination, and their industry was rewarded on 74 minutes when Diver powered home a header from a corner on the right.

Newly energised, Celtic fought anew for every ball as they searched for a precious equaliser. But their search soon proved futile when, on 79 minutes, Red Bull’s Vesel Demaku beat right back Stephen Welsh before delivering a telling cross for Dominik Szoboszlai. The substitute had been on the pitch for a matter of minutes, but made no mistake, lashing a superbly controlled volley high into the net to make it 3-1.

Despite Celtic’s best efforts, they could not find a way to reduce the deficit, and Red Bull ultimately ran out deserved winners. The Austrian may have come into the tournament as one of the less fancied sides, but after this display of skill and composure, there is a sense that they could go far at Al Kass 2016.