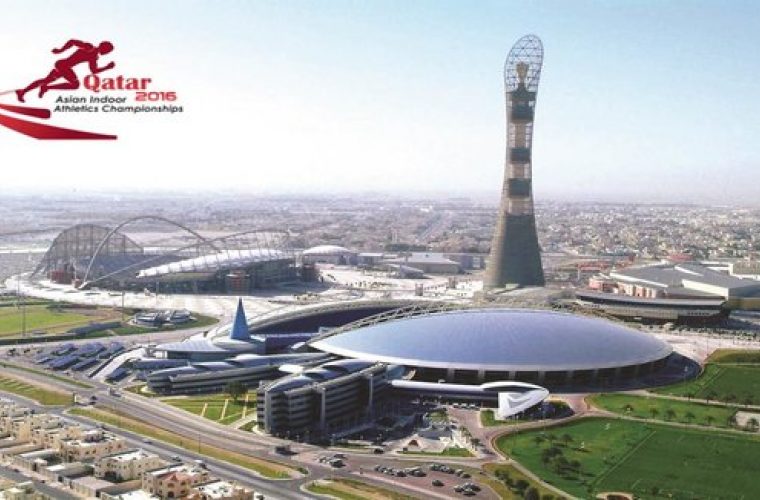 With exactly one month remaining until the multi-event athletes will set foot in Doha’s magnificent Aspire Dome arena for the Women’s Pentathlon 60m Hurdles heats, to commence the 7th Asian Indoor Athletics Championships action, quite a lot standing competition-wise records look certain to fall, starting from the participating nations.

The current record with the most countries entering the Championships is dated back to 2008, when in Doha 29 nations sent at least one athlete in their quest for Championships glory. With 36 countries having already checked in for the 2016 edition - according to the provisional entry list -, it seems that the first record will fall even before the competition will officially kick off. These 36 nations will be represented by 400-420 athletes, a number that will produce yet another Championships’ record.

The hosts are expected to field their largest ever delegation, beating their previous record of 19 athletes (15 men and 4 women) set on home soil in 2008. Given that Qatar athletics pass through a phase of rapid development and has grown as one of Asia’s superpowers, QAF has nominated a 28-athlete strong team, consisting of 21 male and 7 female athletes.

“The increasing numbers of nations and athletes, who are set to compete at the 7th Asian Indoor Athletics Championships in Doha, showcases the tremendous efforts the Asian Athletics Association and the Qatar Athletics Federations had put in, in the last couple of years, to develop and expand athletics throughout our vast continent,” said the AAA and QAF President Major General Dahlan Al Hamad and added:

“I am also proud to see the number of female Qatari athletes qualified to compete internationally, upsurge in recent years. Qatar has made giant steps towards the development of women’s athletics and we feel that quite soon our long-term plan will bear fruit.”

As was previously reported the reigning Asian High Jump indoor champion and Area record holder, Mutaz Barsim will lead the hosts’ goal to match the heroics of the 2014 team which topped the medal table in Hangzhou with 5 golds and 3 silvers. Overall, Qatar has gained 29 medals (16 gold, 9 silver and 4 bronze) since 2006, when the nation first competed at the Asian Indoor Championships, after missing the inauguration of the competition in 2004.

Mutaz Barshim, who opted to limit his indoor appearances this season, to concentrate in his Summer Olympics target, holds, along with the 60m specialist Samuel Francis, the record with the most cumulative gold medals (3 apiece) in all editions, but it is Mohamed Al-Garni the one who has won the most medals than any other Qatari with 5 (2 gold and 3 silver) in total, but, unlike the other two, he has competed in two different events, the 1500m and the 3000m.

The Qataris also possess five Asian Indoor Championships records: in the 60m (6.58 -set by two athletes, Samuel Francis and Femi Ogunode), the 1500m (3:40.86 by Thamer Kamal Ali), the 3000m (7:39.77 by Said Saaeed Sheheen) and the High Jump (2.37 by Mutaz Barshim). Nevertheless, the Chinese who have won 44 gold medals in the previous six editions, more than any other nation, are leading the records’ ranks as well, owning eight.

The 7th Asian Indoor Championships will be held from February 19 to February 21 in Doha and is supported by Aspire and Aspetar, two giant Qatari organisations in the sports’ industry and trusted partners of QAF in recent years.