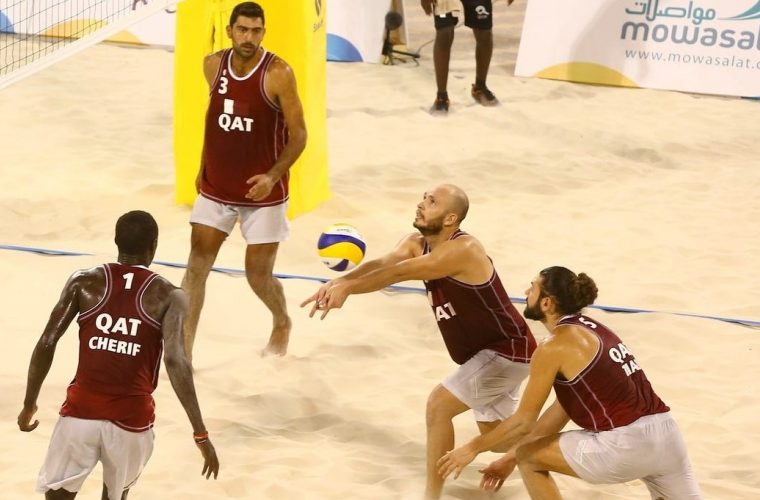 President of Qatar Volleyball Association (QVA) Ali Ghanim Al Kuwari praised the results and the outstanding level shown by the Qatari team at the Association of National Olympic Committees (ANOC) World Beach Games Qatar 2019, which is currently held in Doha, and will conclude on Wednesday.

In his statements to Qatar News Agency (QNA), QVA President said that it would be a good thing for Qatar to lead Group A in this round, especially that the game in its current form is new in Qatar, as it is for the first time the team plays in the 4 * 4 competitions, but it quickly mastered the game, and its members succeeded in getting used to the new system applied for the first time in this tournament.

The team topped the group after winning three consecutive games, where they beat Indonesia, a good team in Asia, then in one day managed to overtake both America and Germany, confirming their eligibility to reach the second round of the tournament, he stated.

Al Kuwari added that the competitions in the second round will be difficult, because the eight teams are good and wish to reach the final stages to win medals. He stressed that the ambition of the Qatari team is to win gold in order to continue to excellence, as it is ranked in advanced positions globally and has great ambitions in the next stage, the most important of which is to qualify directly to the next Olympic Games (Tokyo 2020).

Al Kuwari also praised the efforts of the organizing committee which succeeded in organising the tournament, as well as the large audience who watched the volleyball games from inside Al-Gharafa courts.

The Qatari national team aspires to win the gold medal, especially since it qualified for it, as it includes Ahmad Tejan and the world number 14 Sherif Younis.

The Qatari national team has achieved many continental and international successes in the recent period, where it reached advanced positions for the first time in its history, and became a difficult number in the competitions in the light of its continued participation in many international tournaments with a high rating in the game of 5, 4 and 3 stars, which give high rating points.

More than 1,200 athletes from 96 countries from five continents are competing in 14 competitions in four locations: the Katara Cultural Village, Aspire Zone, Al Gharafa Club and the Ritz-Carlton Doha's Legtaifiya Lagoon.