QD-SBG INSPIRES NEXT GENERATION OF RACING DRIVERS IN QATAR 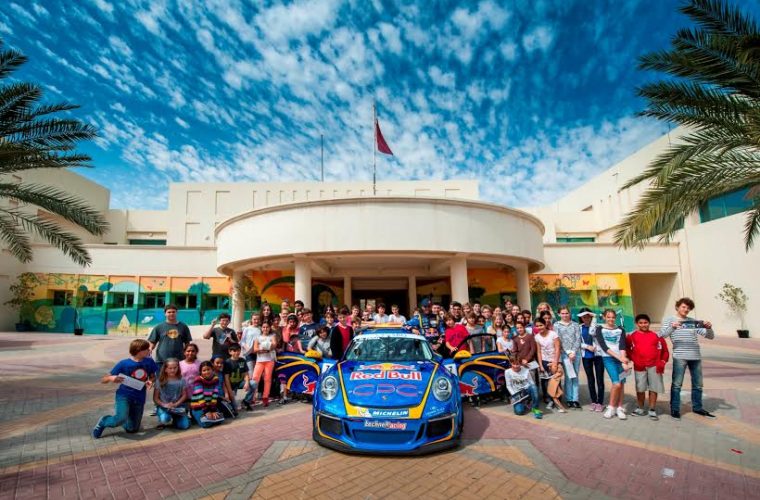 QD-SBG,proud supporter of the Doha rounds of the Porsche GT3 Cup Challenge Middle East, surprised pupils at German International School Doha with a visit from Saudi Falcons driver, Abdulaziz AlFaisal, in a bid to help grow the sport in the region. More than 60 students heard from the two-time GT3 Cup Challenge champion on his experiences, how drivers keep fit and healthy, and what it takes to become racing driver. AlFaisal also treated the students to a look under the bonnet of the stunning new Porsche GT3 Cup, the car which features in the one-make series.

AlFaisal, currently third in the driver standings, welcomed today’s news that Qatar’s Nasser Al Attiyah will race in the remainder of the Porsche GT3 Cup Challenge Middle East, as an important step in growing motorsport in the Middle East:

“The news that Nasser Al Attiyah is joining the series is an important step in continuing to grow motorsport in the region. He is a role model for a lot of young people in Qatar and across the Middle East and I’m sure the home crowds will be thrilled to see him on the track this season. With young talent like AbdulRahman Al Thani also coming through the ranks in Qatar, motorsport has a strong future here.

It’s great to be back in Doha with the Porsche GT3 Cup Challenge and even better to share my passion for racing with the young people in the city. Even if just one of the students we met is inspired to get down to their local track and get in a go kart it will be a success.”

The Doha rounds of the Porsche GT3 Cup Challenge Middle East are proudly supported by QD-SBG. The action gets underway from 8.25pm on January 31 with qualifying taking place before the 12-lap race at 11.00pm.

Created to inspire and identify top Arab and local-based talent, the Porsche GT3 CCME enters its fifth season as the most competitive and professional racing series in the region. The 12-round series features leading drivers from the Middle East and Europe, all competing in identical new Porsche 911 GT3 Cup cars on world-class circuits in the United Arab Emirates, Bahrain and Qatar.

Since the launch in 2009, adrenaline fuelled rivalries have been forged, as proven drivers battle against up and coming talents for individual classifications and team honours.