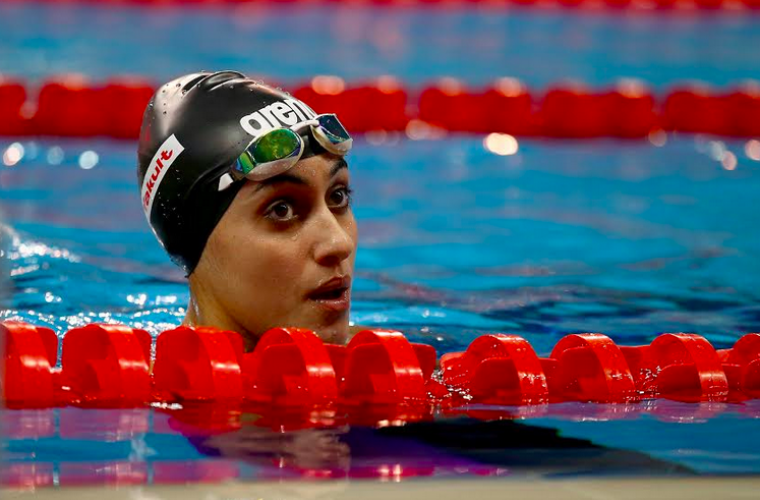 With just two months to go to the Rio 2016 Olympic Games, Qatari swimmer Nada Arakji will once again make history as the first female athlete to represent Qatar twice in the Olympics. Arakji wrote herself into the history books at the London 2012 Games when she became one of Qatar’s first-ever female Olympians. Learn more about Nada in her “Olympic Dreams” film found on the Qatar Olympic Committee’s (QOC) social media channels http://bit.ly/1TVeXlC

“I did basketball, netball, ballet and swimming obviously. My favourite one was swimming and I felt the most connection with that sport. Everything else felt ok but it didn’t feel right. But when I started swimming I felt yes this is for me.” For Arakji, sport runs in the family – her father Mohamed Wafa Arakji was Qatar’s national football team goalkeeper in the 1970s and ‘80s, as well as a player for iconic Qatari club Al-Sadd. It was this early exposure to sport that laid the framework for the 22 year-old swimmer.

“It’s pretty great having a football player as a father. He gives me a lot of advice and he keeps me motivated. So that’s one of things that keeps me going and he tells me all these experiences that he’s had and things that he’s done so it’s pretty interesting to know and relate with that.”

Her love of swimming soon permeated her life, with Arakji creating a school presentation on her idol, Italian Olympic gold medallist Frederica Pellegrini, who she then had the opportunity to meet when competing at London 2012,“being able to meet her in the Olympics was honestly something quite amazing for me”.

Arakji, who was accepted into Carnegie Mellon University Qatar right before she competed in London 2012, and graduated this year ahead of Rio 2016, walks a fine line to find the balance between her education and her swimming career.

“Balancing between swimming and my studies is hard, but since I’m passionate about both it’s all about organising your time. I think that’s the key thing to success.” Arakji said, adding “Nothing’s going to get in your way if you love what you do.”

It is Arakji’s love and passion for her sport that led her to the London 2012 Olympic Games:

“The historic moment being the first Qatari female to represent my country in the Olympics was really something big for me. Competing in the London 2012 Olympics was a dream come true.” she said, adding “It gives me such honour that I will carry with me forever and I’m just really proud and happy.”

With her university graduation behind her, Arakji continues her tireless training for Rio 2016, which takes place in the state-of-the-art Hamad Aquatic Centre, and she hopes utilize her previous experience when she competes in Rio.

“My experience in London has helped. I’ve gone to the first Olympics, seen what it’s like. I have an idea of what the atmosphere will be like in Rio. My goals for the Olympics Games are to be the best I can be and definitely to get a personal best time. With all the training I’ve done I hope that I’ll be able to improve my times and for everyone to be happy.” Arakji said.

Nada Arakji has high hopes that her participation in the Olympic Games for the second time will inspire young Qatari girls to take up sports and to challenge the status quo:

“I definitely hope to inspire more young athletes to take up sport, especially women. I encourage all the girls out there to not be afraid and take risks. It doesn’t have to be sports. Whether it’s education or sports or other things,” Arakji said, adding “I think they should be confident and do what they love.”

Nada will be competing in the 200m freestyle and 100m butterfly at Rio 2016. You can follow her Olympic Dreams on the Qatar Olympic Twitter, Facebook, Instagram and YouTube channels under the hashtag #YallaQatar. The Rio 2016 Olympic Games take place from 5th August – 21st August.