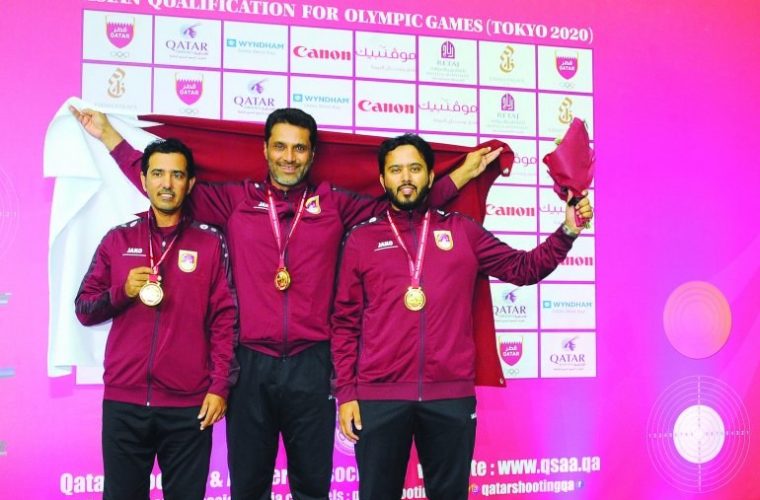 At the Lusail Shooting Range, Rashid Hamad, Masoud Hamad, and London Olympic bronze medallist Nasser Al-Attiyah shot 120 points each out of 125 in the qualification stage as Qatars total of 360 earned them a top place in the team event, ahead of Kuwait and Kazakhstan.

Rashid, Masoud and Nasser all were involved in a qualifying shoot-off with five others for four places in the final, but could not clear the intense competition.

Nasser will be the most disappointed of all.Having been in a good position after three rounds on day one, the Qatari legend shot a 21 in the fourth round, which dealt a huge blow to his final hopes. Though he shot a perfect 25 in the fifth and final round, it only meant he was involved in an eight-way shoot-off.

Meanwhile, it was a double delight for India in the skeet as Angad Vir Singh Bajwa won gold, while Mairaj Ahmad Khan picked up a silver to go with two Olympics quotas.

Their medals ensured India secured a record 15 quota places for the 2020 Tokyo Olympics, easily surpassing the 12 for the 2016 Rio Games and 11 for London 2012.

There was a shoot-off for the gold medal and Bajwa prevailed 6-5 against his compatriot after both were tied on 56 at the Lusail Shooting Complex. The bronze medal and the last quota place went to Saud Habib of Kuwait.

It was a closely contested final, with Tomar, South Koreas Kim Jonghyun and Chinas Zhonghao Zhao competing amongst themselves for the podium. Tomar ultimately had to settle for bronze with a score of 449.1, while the Korean nabbed top spot on the podium with a lead of just 0.8.

Meanwhile, continuing Indias impressive performance at the championships, the duo of Manu Bhaker and Abhishek Verma got the better of compatriots Saurabh Chaudhary and Yashaswini Singh Deswal 16-10 to win the gold medal in the 10m air pistol mixed team event. Bhaker and Verma shot 577 and 387 in the two qualifications, while Chaudhary and Deswal managed 576 and 387.

The Qatar Shooting and Archery Association President Ali Mohamed Al Kuwari congratulated the Qatari shooters on their achievement and stressed that they claimed the first place after a thrilling competition with Kuwait and Kazakhstan.