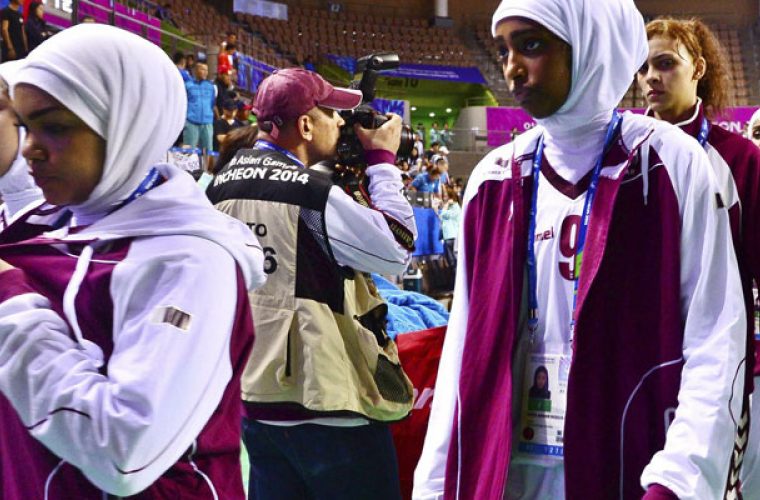 The negative stand taken by the International Basketball Federation (Fiba) on Muslim sportswomen wearing head scarves (hijab) has come in for harsh criticism from Qatar residents who termed the world body's policy as discriminatory, hypocritical and archaic.
Denied permission to wear hijabs in their group opener against Mongolia a day earlier, and with no hope of intervention from organisers or the Olympic Council of Asia (OCA), the Qatari women failed to show up for yesterday's game against Nepal and declared their Asian Games over.
International sport associations which are expected to promote and respect different religions and cultures are behaving in a way that encourage racism, bias and discrimination, local residents expressing solidarity with the national team said.
Prevented from wearing hijabs due to Fiba Article 4.2.2, which dictates players cannot wear “headgear, hair accessories and jewellery,” the Qatari women felt they had no choice but to take a stand.
Both Qataris and expatriates rejected the Fiba regulation as outdated and called for revision of the rules that denied women players the right to wear hijab (Islamic head cover). All the other sports allow hijabs.
“The Qatari women should be applauded for the strong stand they have taken; they have abided by the rules and teachings of their religion which involve no harm to anybody and I think would not affect the performance of any party at a game in anyway. Also, it has been common to see Muslim sportswomen playing with their hijabs on at various international events. How can such a denial be interpreted but as bias against us and our symbols and practices? ,” wondered a Qatari woman who identified herself as Umm Khalid.
On forfeiting the match to Mangolia on Wednesday and again to Nepal yesterday, she said that standing for one’s sacred values and principles is the real victory. Further, she expressed her full support for the action of the Qatari players and said she was proud of them.
A group of Qatari young men also expressed their support for the team and rejected the regulations of the Fiba, calling the stipulation as unreasonable. "Many other sport organisations allow Muslim women to wear the hijab. Sikhs are allowed to wear turbans and similar concessions are granted to others as well. Why Fiba is sticking with such an outdated attitude of cultural discrimination?," they asked.
"At a time when the world is coming closer and together, Fiba is dividing people with their archaic rules.
“It is the goal of these international events to bring people closer and make them rise above cultural and religious differences. For instance, we in Qatar have people from more than 180 countries living in harmony. As long as individual behaviour does not hurt others, no action is taken. It is really shocking to hear of such practices at venues which are supposed to boost global tolerance and peace,” said Fahd, a young Qatari man .
A number of expatriate men and women also supported the stance of the Qatari players and said they have done the right thing by upholding their beliefs and principles despite the undesirable outcome. However, some said that as the players knew beforehand that they would not be allowed to play if they wore the hijab , they could have expressed their intention to the organizing committee ahead of the match.
“I think they have the right to abide by their tradition but it would have been better if they had informed the organisers about their demand well in advance . May be they could have reached some sort of a compromise ,” said a British expatriate woman.
Qatar forward Refaa Morjan Mohamed has described the Fiba rule as an insult to Islam. “This is an insult to us, they did not respect our religion,” she told AFP.
Basketball body Fiba's ban on headwear in international competition is supposedly motivated by safety but it has raised hackles at Asia’s Olympics, which includes several Muslim nations.
The Olympic Council of Asia (OCA), which runs the quadrennial Asian Games, has itself criticised Fiba. Other sports such as football allow religious headwear.
A cross section of the residents who spoke to Gulf Times said it is time for the outdated Fiba rules to be reviewed for the sake of inclusion of all and respect to everybody.
"Muslim women represent a sizable chunk of the world population and no regulation that leads to the exclusion of such a large number of people can be justified under any pretext. The Olympic ideals of diversity and inclusiveness were cast aside at the Asian Games,” they opined.
Competition at the Asian Games is conducted under the regulations of the sports’ international governing bodies, meaning athletes in other sports are free to wear hijabs.
An official form Incheon’s organising committee (IAGOC) said he had sympathy for the Qatari players but that the Games had to follow Fiba’s regulations.
“We can’t change Fiba regulations right now even if we consult with them,” the official told Reuters .
“Personally I feel sorry for them. All the other sports allow hijabs.”