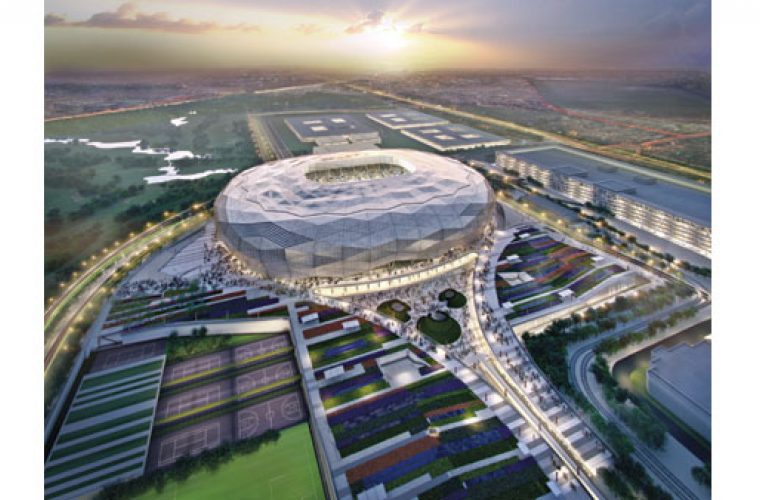 Step by step, Qatar’s momentous 2022 dream is being converted into reality and yesterday another part of the blueprint fell into place with the unveiling of the Qatar Foundation Stadium and Health and Wellness Precinct, the fourth stadium for the FIFA World Cup.

The Supreme Committee for Delivery & Legacy (SC) and Qatar Foundation for Education, Science and Community Development (QF) chose the fourth anniversary of Qatar winning the right to host the 2022 World Cup to release the plans of the stadium which will stage matches until the quarter-finals of football’s biggest tournament.

The stadium design was released at the immaculately set-up Ceremonial Court of the Hamad Bin Khalifa University in the presence of HE the Prime Minister and Interior Minister Sheikh Abdullah bin Nasser bin Khalifa al-Thani, HE the Minister of Youth and Sports Salah bin Ghanem bin Nasser al-Ali and HE the Qatar Olympic Committee secretary general Sheikh Saoud bin Abdulrahman al-Thani.

“I am pleased that on the fourth anniversary of Qatar winning the right to host the 2022 FIFA World Cup, the Supreme Committee for Delivery & Legacy is able to stand alongside one of the most prominent Qatari institutions to reveal the design of the Qatar Foundation Stadium,” said Hassan al-Thawadi, the committee’s secretary general during the design launch.

“This is another key milestone in our preparations for hosting the 2022 FIFA World Cup, and is the fourth stadium design we have unveiled in the past 13 months. The QF Stadium and Health and Wellness Precinct will not only allow us to host an amazing World Cup but also leave a genuine legacy in Qatar well beyond 2022,” he added.

The innovative design will see the use of geometric patterns which will allow the stadium to reflect the light of the sun and thus have different colours through the day. The 40,000-capacity stadium precinct, which is expected to be completed in 2018, will have a mall, gymnasiums, swimming pool, tennis courts, football pitches and more.

“The Qatar Foundation Stadium and Health and Wellness Precinct will deliver a rich and sustainable sports and health legacy for the QF community and people of Qatar, and help the nation achieve future successes long after the tournament.”