The third round of Qatar Superbike Championship will take place this weekend, 6th & 7th November at Losail International Circuit. In the previous round, we could see a tough and exciting battle between the leader and defendant champion, Alex Cudlin, and Mishal Al Naimi and this weekend the battle is expected to continue.
The leader, Alex Cudlin is feeling really good on the bike this season and he is very motivated to fight again for the victory .' I'm really looking forward to round 3. Obviously it's important we keep our momentum going after winning the first 4 races of the season. Round 2 was a real battle with Mashel and I was happy to win. I hope round 3 will be just as spectacular for the spectators’ Cudlin said. 'I feel really good on the bike so far this season. I'm motivated, fit and have a bike I'm comfortable with so this gives me a wealth of confidence. I can't wait to get out on track on Friday. Hopefully the conditions are good and the racing is great. Best of luck to all the competitors and thanks to QMMF for having me again’ he added.
Al Naimi, who finished in second place in the previous rounds, is very concentrated and motivated for this weekend’s round to fight for the two wins ‘ for sure that this weekend there will be a nice battle with Alex and Nasser and I will push very hard to be in front and take the win. ‘ Al Naimi said.
Cudlin is leading the championship with 100 points , Al Naimi is second with 80 and Nasser Al Malki is third with 61 points. Saeed Al Sulaiti is in four position with 50.
In the Qatar Supersport Championship, the leader is the Saudi Arabian rider with 100 points, followed by Fahad Al Sowaidi from Qatar with 80 points and Ahmed Al Muyini with 64 also from Saudi Arabia.
Tomorrow Friday, in the second round of the Qatar Challenge, the leader and defendant champion of QCH, Mark Holroyd is very excited for the second round of the season ‘ I really want to start the second race of the championship, all preparation are going well and my car is ready for another exciting battle with the others. Thanks to my sponsor Ooredoo and QMMF for the support and this exciting championship’. Holroyd said.
Bikes activity is scheduled to start at 16:45 with the free practice 1 and will continue until midnight. The car practice is scheduled at 20:00 and the race will be at 23:30. 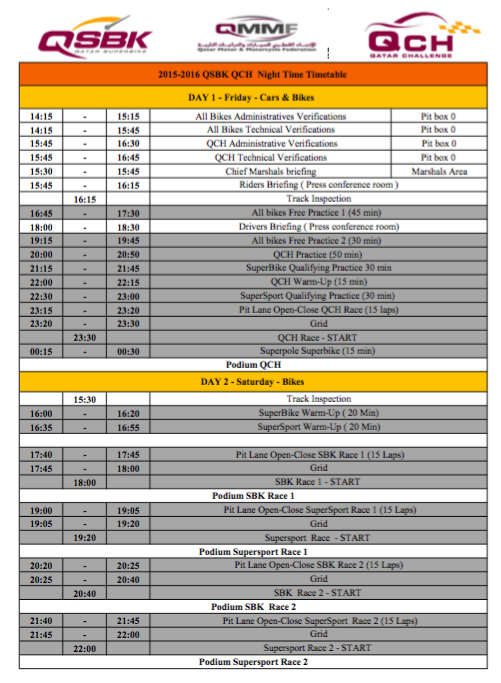