A delighted Frijns was joined on a podium representing three different nationalities by Ryan Cullen who took the race win and former champion Abdulaziz AlFaisal of Saudi Arabia in second. Frijns is now in a healthy fifth position in the overall driver’s title and will look to move further up the standings in Race 2.

Few could have predicted the shock result following the domination of Al Nabooda’s invincible driver Jeffrey Schmidt who had claimed victory in all six of the previous races of Season 7.

For Frijns the strong result further highlights his resurgence in form and the series after claiming his second successive podium finish following on from a third place in Abu Dhabi one week ago. Unfortunately for the Doha-resident his success on the track in Race 1 was matched by nearest rival Abdulaziz AlFaisal who managed to extend his lead over Frijns to nine points in the fight for fourth in the overall standings.

Speaking after a third place finish Charlie Frijns said: “I started on the grid in fifth position, I had a really good start and there was a big crash ahead of me on the 1st turn which slowed me down a lot. I lost a lot of places and had to regain my position, I managed to get back up to third place and that’s where I finished the race. Moving up fifth to third is great for me and the team and another podium finish after Yas marina last weekend. The championship is still possible for me after what happened today but it’s going to be very difficult. I am hoping for a strong qualifying position tomorrow and another good start and hopefully we can make it three podiums in three races.”

However as the region’s most professional and competitive series proved nothing is guaranteed in motorsport. The win by Cullen, the first of his Porsche career in the Middle East, sees the Irishman leapfrog Al Nabooda’s Zaid Ashkanani into second in the overall driver standings. The gap between second placed Cullen and overall leader, Schmidt has been reduced to only one point.

Speaking after his race win Ryan Cullen said: “The reason I won the race is because I was able to get my strong lap in qualifying which was good enough for third on the grid. In the race itself I got a good start, better than the front runners, and to get in front of them in turn one was extremely important. Though I got a little tap from behind at turn one I was able to hold it together and by the time I got to the second turn I was in the lead. I could see the train of cars behind so put my head down and kept going. I’m obviously delighted to have closed the gap to Jeffrey in the championship so it’s game on from here”

Round 4 had been billed as a glorious homecoming for Al Nabooda Racing team who sought to build upon their sizable lead in the team championship with drivers Schmidt and Ashkanani well placed in first and second in the standings heading into Round 4.

Confident displays in morning practice and qualifying all pointed towards another race win and podium finishes for Al Nabooda Racing with Schmidt on pole and joined on the front row of the grid by teammate Ashkanani in second. But as early as the first corner of the opening lap the race and championship was blown wide open.

The notorious tight right-hand corner at the end of the start finish straight has always been pivotal in determining race results at the Dubai Autodrome especially on the first lap and it proved no different today.

Starting from the front row a poor start from Schmidt by his own high standards saw a charging Ashkanani close in on the race lead as the teammates entered the opening corner. But the duo misjudged their track positions with Ashkanani spinning out and taking Schmidt with him. The unfortunate collision resulted in an early retirement for Schmidt and Ashkanani dropped to the back of the grid before covering to finish seventh.

In the overall standings Schmidt (150pts) is now just a mere one point ahead of race winner Ryan Cullen (149pts), with Kuwaiti starlet Zaid Ashkanani third closely followed Saudi Arabia’s Abdulaziz AlFaisal (121pts) in fourth. All eyes will now be Race 2 tomorrow as motorsport neutrals relish the battle for the driver and team titles.

In a contrast to the mood of Al Nabooda, Al Faisal Racing enjoyed their most successful outing of the season. Brothers and teammates finished high in the standings to close the gap in the team championship on Al Nabooda to only thanks to a second place by Abdulaziz AlFaisal and Saud AlFaisal’s best result of his career in fourth.

The region’s leading drivers will line-up in the Porsche 911 GT3 as the star attractions at Dubai Autodrome. The drivers will face 12 laps of the 5.39KM Grand Prix Circuit at the Dubai Autodrome with Round 4 Race 2 on Saturday 30 January. All fans welcome. Qualifying takes place 11.35am and Race 2 starts at 4.00pm 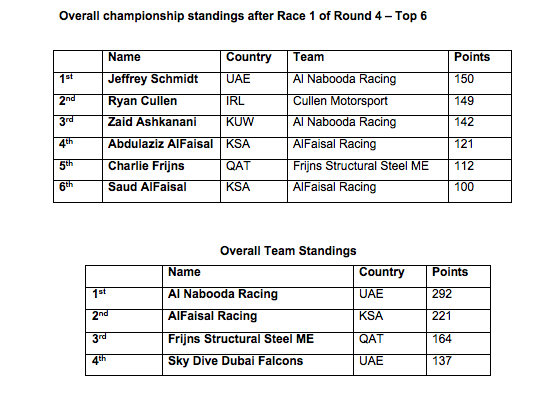