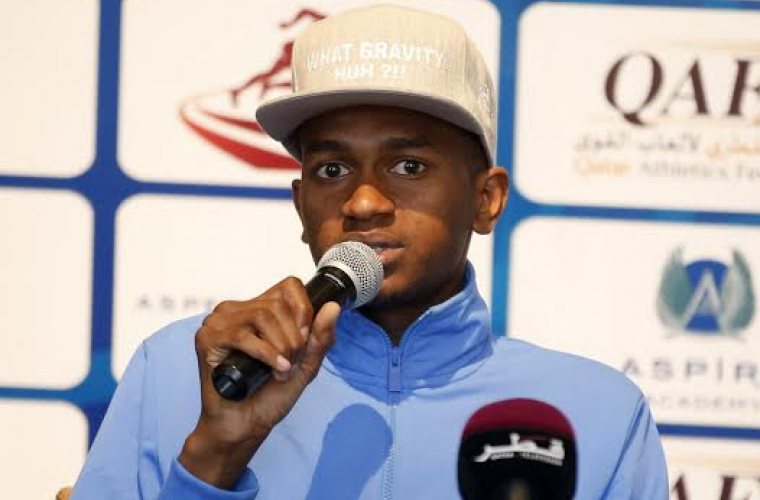 Qatar vigorously prepares to dynamically enter the 2016 athletics season with yet another prestigious international event, the 7th Asian Indoor Athletics Championships, staged on its soil, QAF announced today at a press conference held in InterContinental Doha the City Hotel.

Asian Athletics Association and Qatar Athletics Federation President, Major General Dahlan Al Hamad revealed that approximately 450 athletes coming from 36 Nations will come to Doha to take part at AAA’s top indoor competition, among them the High Jump Olympic bronze medalist Mutaz Essa Barshim, who was among the speakers at the Press Conference. Moreover, along with the number of the officials the guests from all delegations will be more than 600.

“We at Qatar Athletics Federation feel very happy and proud to host yet again this prestigious event in Doha. This is another high class competition in line with our Nation’s Vision for 2030 and once more we have set high standards in organising such an important sporting event, as we aim to continue building a lasting legacy as ideal organisers of major sporting activities at global, continental or regional level.”

“Throughout all these years we have gained valuable experience in hosting large-scale athletics events with a global impact, a mission that will be culminated with the hosting of the 2019 IAAF World Athletics Championships,” said Mr. Al Hamad, who added that Qatar team’s objective is to rank first, just like two years ago in Hangzhou, China:

“Qatar may boast of having one of the youngest and most talented teams worldwide. At the 7th Asian Indoor Championships we expect to field a full-strength squad of more than 25 male and female athletes. Two years ago we topped the medal table with 5 golds. We are optimistic that the home advantage will guide our athletes to repeat that feat, and furthermore demonstrate their enormous potential ahead of the World Indoor Athletics Championships in Portland, USA.”

The 7th Asian Indoor Championships will be one of the very last chances for the Asian athletes who haven’t made it thus far, to meet the qualification standard for Portland. Aspire Zone’s fast track will surely assist many of them fulfill their task and qualify for the World Indoor Championships.

Speaking on behalf of his fellow compatriots, the reigning World and Asian Indoor High Jump champion, Mutaz Essa Barshim stated he will do everything to help the team duplicate its 2014 heroics, while he also admitted that he will attack again the world record both indoors and outdoors.

“I want to thank QAF for bringing this important competition in Qatar. First of all I want to stay healthy and then do everything possible to compete at the highest level. It will be a very difficult season with so many great competitions ahead, like the Asian and the World Indoor Championships and of course the Olympic Games in the summer.

“I will try to beat the world record indoors and outdoors on 3-4 occasions this year, starting from the World Championships in Portland” said Mutaz, who will be soon leaving Doha to continue his training in Poland. He also said that he will restrict his indoor appearances this season comparing to previous years.

Abdel Hakeem Al Ameri, QAF Head of Technical Committee & Competition and Director for the 7th Asian Indoor Athletics Championships stated that many foreign delegations have already asked to come to Doha well before the Championships to boost their winter training preparations:

“Our fine weather and the ideal facilities and conditions we may offer, have attracted the interest of various countries who have asked us to accept them before the Indoor Championships for training camps.”

The 7th Asian Indoor Championships is supported by Aspire and Aspetar, two giant Qatari organisations in the sports’ industry and trusted partners of QAF in recent years.