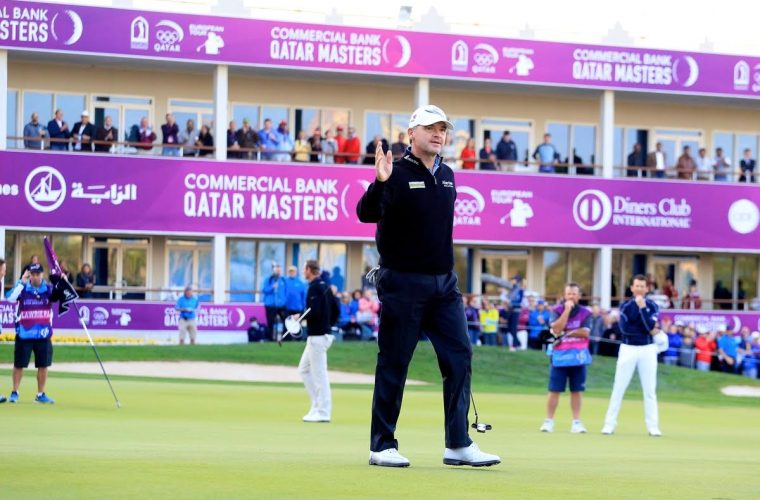 Friday, 29 January 2016. Doha, Qatar: Defending champion Branden Grace inched closer to an elusive double at the Commercial Bank Qatar Masters at the Doha Golf Club on Friday. The Protea carded a bogey-free round to finish with 4-under 68 and a fine total of 205 on the leaderboard.

But, Major winner Scot Paul Lawrie, who had carded an impressive 11-under to shoot up the leaderboard to first position, yesterday, continued to hog the limelight with his impressive driving skills on the greens. On Friday, he carded an error-free round 2-under 70 to maintain his lead with 13-under 203 after three rounds.

Post a birdie at the par-four 14th and 16 pars, Lawrie birdied the par-five 18th to prompt huge cheers and move to 13-under-par, doubling his lead over Grace.

“It's obvious the wind was blowing a little bit. Conditions were tough as you can see by the scoring, so it was good to go around there and not have a bogey,” said Lawrie, who won the tournament in 1999 and 2012.

“Still, it was a little bit frustrating as I hit a lot of good putts that didn't go in. However, you look at the leaderboard and you can see that you're still kind of doing well, so the frustration goes away pretty quickly and it was nice to end the day with a good putt,” added the 47-year old, who had won the Open Championship in 1999.

Spaniard Sergio Garcia failed to build on his good game from the previous day and slipped 13 place to finish tied-19 littering his front nine with two bogeys and back nine with a bogey and a double bogey. End result – a 2-over 74 on the day with a tally of 210 – a rather poor performance by the 12th ranked player. And if it hadn’t been for an eagle on the par five 18, Garcia would have slipped further down the order.

Day 1 leader, Louis Oosthuizen of South Africa too failed to raise his game. He carded 1-under 71 to finish with total of 209 and T16 position.

Thongchai Jaidee of Thailand improved a bit carding 1-under 71. But, with a total of 211 and a position of T25 on the leaderboard, he would have an uphill task on the final day on Saturday, when the contest would touch the zenith.

The Big Easy, Ernie Els of South Africa continued going easy. Unfortunately, the approach turned out to be rather too easy for competitive golf, forcing the man to be content with a T19 position with a total of 210 on the leaderboard. No wonder, his card reflected that – a bogey on third and seventh hole were the downers he could have avoided, but for those unfortunate bunker shots. A birdie on the back nine was the only spike on his rather ‘flat card’ with pars written across it.

Besides Lawrie, the day belonged to Grace, who seems to be peaking at the right juncture. Gradually, he has upped his game to sitting pretty on T2 – a fine position, impressive actually, to jump start the final day and reach out for the Mother of Pearl trophy.

Incidentally, major winners Adam Scott (2002, 2008) and Lawrie (1999, 2012) are the event’s only two-time winners, but no player has won back-to-back titles in Doha, unlike at The European Tour’s three other events in the Middle East. Considering this, Grace could be the cynosure of all eyes if he manages to achieve the feat, but then Lawrie might just be aiming for another one in Doha.

“It was a brutal day out there. The wind was blowing and the greens were tricky. In conditions like that, it's tough to give yourself those chances,” said Grace, the World No. 11 and the tournament’s top-ranked player.

“I think patience was the name of the game. I pretty much got the most out of my round. I didn't really think I left any out there, so four-under was a great score,” added the 27-year old.

Qatar’s Al Shahrani, who shot consecutive rounds of three-over-par 75, is gradually climbing up the leaderboard of golf success.

“I was nervous, but excited,” said Al Shahrani, who first played at the Commercial Bank Qatar Masters in 2012, when he was just 17.

“The Commercial Bank Qatar Masters is the highlight of my year. It’s the biggest tournament I play each year and the main goal is to make the cut,” he said.

“This was my best year. I shot 75 and 75. I could have shot better, but that’s golf and sometimes you get unlucky. That’s fine, so hopefully next year,” said the Qatar University student, who is busy honing his golfing skills under Team Qatar coach Mike Elliot. (Qatar Sports Press Committee)