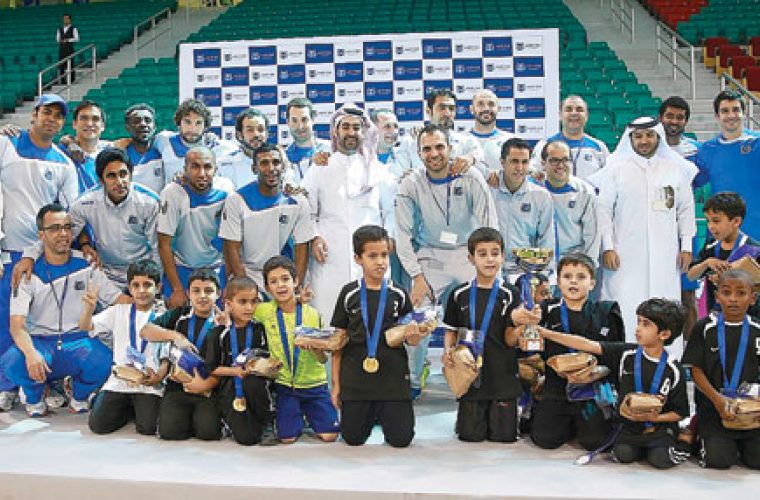 Young footballers with officials after the finals at Aspire Dome. Doha: About 300 schoolchildren swapped their classrooms for the football pitch to compete in the third Aspire Academy School Football Festival.

Cheered on by teachers and parents, the seven and eight-year-olds played over 50 games in the morning friendly competition.

The five-a-side fixtures lasted 10 minutes and were played on the grass pitch in the Aspire Dome.

Given the chance to compete against friends from other schools, the budding footballers showed off skills as they looked to impress scouting staff from Aspire Academy.

In previous editions of the festival, boys who had impressed in games were approached and asked to join the academy.

After a tense final between Al Andalus and Umm Salal Ali, it was Al Andalus who were crowned 2014 champions after a dramatic last-minute effort that ended the game 2-1.

The scorer of the winning goal, Ishmail Misaad, 7, lifted the trophy and received a goal medal from former Real Madrid and Spain captain Raul.

After the final, Ishmail said he was “one of the happiest boys in Qatar now and maybe the world too.”

Delighted to have met one of his footballing heroes, he added: “I cannot believe that I have had the chance to meet Raul today, he is one of the best players of all time and friendly too.

“I have enjoyed the tournament and am so happy to have scored the important goal.”

Equally pleased with the result was Ishmael’s teacher, Mariem Hammami, who came to the tournament to cheer her class on from the stands.

Happy to see her student’s hard work rewarded, Mariem said: “I just want to say how proud I am of the boys here today and how happy I am with their performance.

“These students are a fantastic, special group of children and I think they will benefit from playing here today.

“The festival has been wonderfully organised and I think it will give the children a lot of confidence and experience playing in a proper competition.”