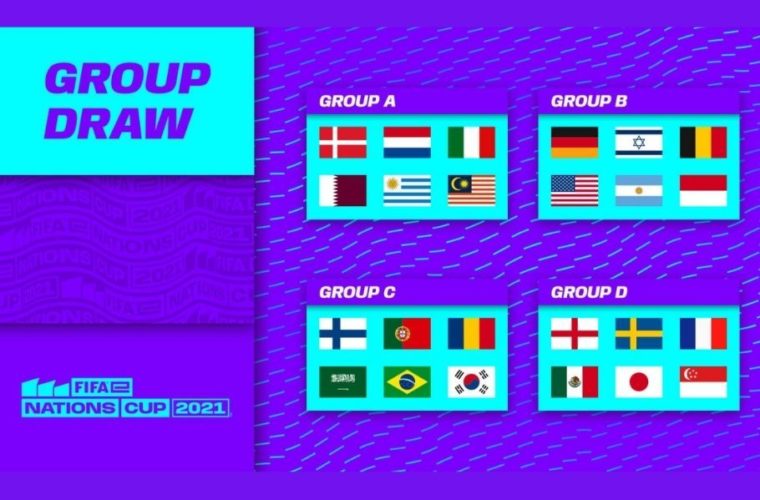 Qatar has been placed in Group A of the FIFAe Nations Cup 2021 draw!

#Qatar 🇶🇦 have been placed in Group A of the FIFAe Nations Cup 2021 draw 🎮#FeNC pic.twitter.com/QtfzvGH3D0

The pinnacle of 2v2 national FIFA esports is almost upon us: the FIFAe Nations Cup 2021™ group stage draw is complete. 24 countries from across the world are coming to Copenhagen in August to compete on the world’s biggest stage for competitive national team EA SPORTS FIFA™ and with the draw finalized, they will now know who they will be facing off against in their first matches.

National pride and one of the most desired titles of the year are on the line as players will represent their nations in a highly competitive field of national teams. 60 nations participated in the FIFAe Nations Series™, but only 24 will pit off against their rivals in Copenhagen to fight for their ultimate goal: Winning the FIFAe Nations Cup 2021™ for their country.

Member associations from all around the world participated as the FIFAe Nations Series 2021™ kicked off at a domestic level, with each country selecting their most skilled players to compete in the FIFAe Nations Online Qualifiers™, where they went head-to-head in their respective regions in the hopes of securing one of the 24 spots at the FIFAe Nations Cup 2021™. A video explainer of the format can be found here.

Those qualified have been drawn into four groups of six - each member association will be playing each other in a round-robin format - with the top four of each group qualifying for the single-elimination knockout stage played in a best-of-three format. Over the tournament duration, all matchups are played across both consoles, with each game being a 2vs2. The 24 nations are each represented by three players, with one player as a substitute.

With the FIFAe Nations Online Qualifiers 2021™ finishing last month, the search to crown the ultimate national team in FIFA esports comes ever closer as we finally get a look at what matchups will be taking place at the group stage of the tournament.

Reigning champions France will look to retain its title from their inaugural win in 2019 with a new-look line-up this year of Amine ‘Mino’ Boughanmi, Leandro ‘Peixoto’ Peixoto and Vincent ‘Vinch’ Hoffmann as they face off against England, Sweden, and Mexico.

The host nation Denmark, who are automatically qualified, will look to please the home fans as they will take on nations such as Qatar and Italy, whilst winners of the South America Online Qualifiers Brazil have mouth-watering ties against Portugal and Saudi Arabia.

In front of millions of fans across the world watching online, these countries will go head-to-head for one of the biggest titles in competitive FIFA and a share of the total USD 400,000 prize pool, in addition to the USD 100,000 already distributed throughout the qualification process.

The FIFAe Nations Cup 2021™ provides a global stage where nations are represented by the best domestic players who can fly their flag for their country’s pride and community. This narrative adds a whole different dimension to the FIFAe tournament series, both for fans and players, cementing it as one of the must-watch events of the FIFAe calendar.

The FIFAe Nations Cup 2021™ will captivate fans all over the world across the weekend of 20-22 August - and all matches from the pinnacle tournament will be streamed live on FIFA.gg - as well as being able to view recent results.