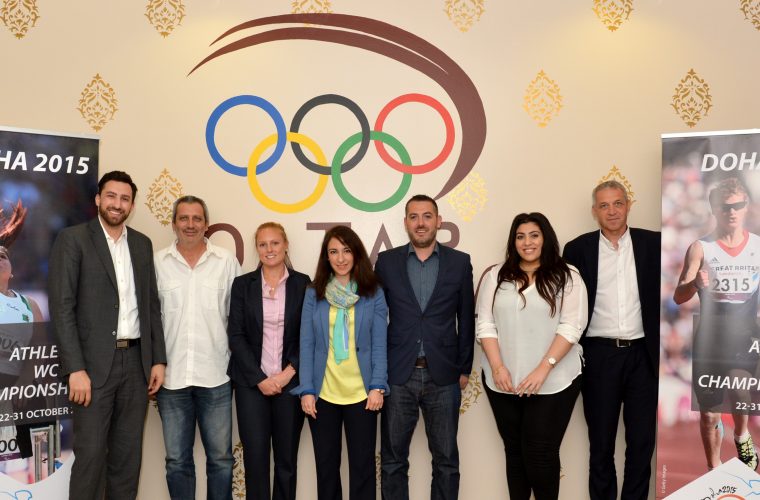 Doha, Qatar – 31 May 2015: Qatar is preparing for a ground-breaking autumn of live action as the nation continues to build on its global reputation as a home of major international sports events. Doha will welcome the IPC Athletics World Championships from 22-31st October – a historical first for the entire region.

An International Paralympic Committee (IPC) delegation led by Head of IPC Athletics, Ryan Montgomery, have just concluded a visit to Doha for a final update on progress ahead of the World Championships, which are fully on track. The delegation visited key venues, discussed the detailed operational plans, and met withHis Excellency Dr Thani Al Kuwari, Secretary General of the Qatar Olympic Committee (QOC).

“It has been an honour to welcome the International Paralympic Committee to Doha this week. We are very grateful for their guidance and support as we finalise our preparations to host the IPC Athletics World Championships in the Middle East for the first time in history. We are committed to working in partnership with the IPC to organise an exceptional edition of the World Championships that will raise the profile of Paralympic sport and cement a true legacy across the whole region. Qatar is a nation passionate about sport and we look forward to welcoming the world to Doha in October.”

The IPC Athletics World Championships will be the biggest Paralympic event ever hosted in the Middle East. They are also the second biggest para-sport event in terms of competing countries after the Paralympic Games and will be held in the 12,000 capacity Qatar Sports Club’s Suhaim Bin Hamam Stadium. The Championships will feature around 1,300 athletes from over 100 countries and will serve as one of the last major competitions before the Rio 2016 Paralympic Games.

The World Championships will also serve as key qualifiers for the Rio 2016 Paralympic Games ensuring that the very best of para-sport will be showcased, helping to capture the attention of new audiences and raising the profile of Paralympic sport across the whole of the Middle East. Qatar will utilise its tried and trusted state-of-the-art sporting infrastructure as well as its years of experience in successfully hosting world-class events to bring the premier IPC event to new fans and inspire new athletes in the region.

Speaking at the conclusion of the IPC’s visit, Head of IPC Athletics, Ryan Montgomery, said:

“There are less than 150 days to go until Doha 2015 which I am confident will set a strong benchmark for all future World Championships. I was greatly impressed by the level of planning and implementation so far by the Organising Committee and am sure that this will be a truly excellent event for athletes, spectators and TV viewers alike.

“This event will showcase some of the best of what the Paralympic Movement has to offer – great high level athletic performances, superb rivalries and achievements that will surprise and inspire all those who witness this event.”

“We are pleased that the IPC are happy with the progress that we have made and we have been working hard to ensure that every detail is in place to deliver a hugely successful World Championships. The world’s best athletes will descend on Doha in October, showcasing the very best of mankind and demonstrating what can be achieved through hard work, perseverance and dedication. It is our aim that they will inspire young people, spread the values of sport and equality, and raise the profile of Paralympic sport across Qatar and the whole of the Middle East.”

As part of their preparation for the IPC Athletics World Championships, Qatar’s Paralympic stars have been racking up accolades in various international competitions. Abdelrahman Abdelkader, who competed in the London 2012 Paralympic Games, started his para-athletics season with a gold medal in shot put at the 7th Fazza International Athletics Competition – a fixture of the IPC Athletics Grand Prix. Abdelkader is currently ranked second place worldwide for this season. Meanwhile Mohamed al-Khubaisi claimed gold in the T34 Men’s 100m and 200m events in Beijing during another Grand Prix fixture.

“I cannot wait to compete in the IPC Athletics World Championships in Doha in October. Winning two gold medals for Qatar at the 2014 Asian Para Games was an amazing experience but competing in one of the biggest Paralympic sports events in the world in front of a home crowd will be a dream come true. The World Championships will be a fantastic opportunity to raise awareness about para-athletics and disability sport in Qatar and across the whole of our region. I really hope that I will inspire others to realise that being disabled is not a negative thing and that you can strive and achieve so many things in spite of your disability. I hope that we will inspire a new generation of Paralympic sporting heroes!”