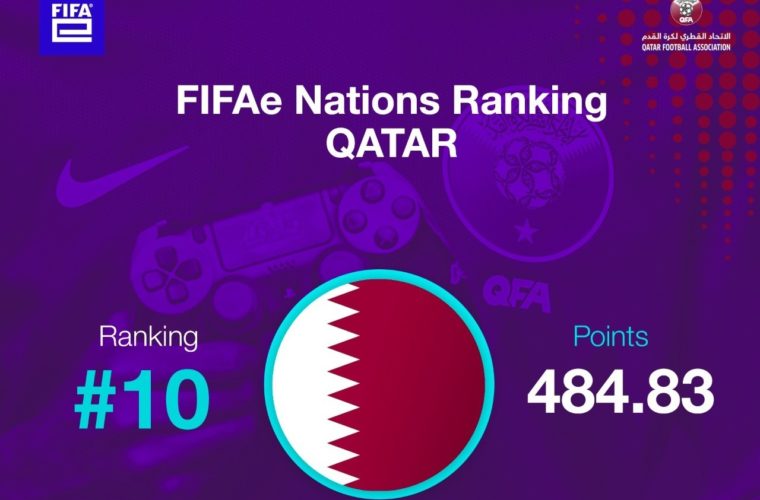 Qatar’s national e-football team ranked 10th in the world in the general classification, details revealed by FIFA show. Qatar has a tally of 484.83 points, making the country the 2nd GCC country to rank in the top 10 after Saudi Arabia and 5th in Asia. Canada is ranked 9th with 492.86 points, surpassing Argentina’s team by 450 points.

The ranking of the top five teams are as follows:

Our 🇶🇦 national e-sports team for football 🎮 has reached 10th position worldwide in the latest FIFAe Nations Ranking, with a tally of 484.83 points pic.twitter.com/gHmBJFjvEb

Qatar’s national e-football team qualified for the finals of the Nations Championship for the Middle East and Africa (PlayStation and Xbox ) which will be organized by FIFA in the Danish capital Copenhagen from August 20-22, 2021.

Qatar bagged second place in the qualifiers behind Saudi Arabia while participating in this tournament for the first time.

Al-Mughaseeb is a professional e-sports player who supports Paris Saint-Germain. He has won 30 times in the FIFA 21 weekly competitions and has played in more than 30 local, regional and international competitions, including the FIFA Interactive World Cup.

The second member of the Qatar national team is Jassim Al-Eid, the best Xbox player in Qatar, who is among the top 200 Xbox players in the world according to the FIFA rankings. He has won 30 times in the FIFA 21 weekly competitions.

Rashid Ahmed” is the fourth-best Playstation player in Qatar and among the top 100 players from West Asia, according to FIFA rankings. He has competed in more than 20 local, regional and international competitions, including the Qatar Football Family e-Championship in which he got third place.

Youssef Hani is also ranked fifth in the list of the best Playstation players in Qatar, and one of the top 150 players from West Asia, according to FIFA’s rankings.