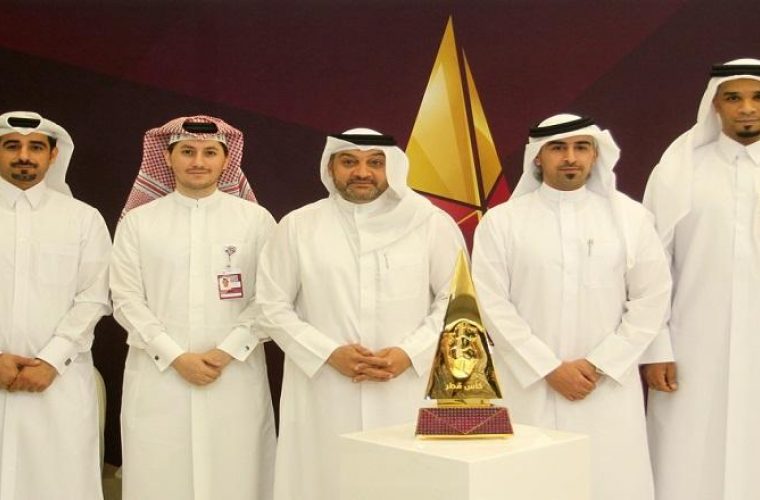 Today at Lekhwiya Sports Club stadium the Qatar Stars League held a press conference to launch the second edition of the Qatar Cup. The competition is the League’s showpiece event and comes at the end of a long yet exciting season. The tournament sees the top four teams take part in two semi-finals and the qualifiers will face off in a glitzy high profile Final.

The press conference kicked off with a short Qatar Cup promotional video and was followed by Mr. Abdulla Al Remithi – the QSL’s Brand manager who described how the branding colours for the tournament are the same as the national colours of Qatar. He went on to say that members of the public should look out for advertisements about the 2015 Qatar Cup around Doha.

Mr Hassan Al Kuwari- QSL - Head of General Events, also spoke about the success of last year’s event and how this year will be even better, Mr Kuwari then spoke about the many prizes on offer for the fans saying, “We have some really great prizes that will make a great few days even more fun.”

With regards to tickets, fans can go to the QSL website to find out more details and also buy them directly. There will be tickets for sale this week onwards, at various points around the city. With a total capacity of just 8 or 9 thousand at the stadium, we recommend that fans go early and buy tickets.”

With regards to the matches, Mr Ahmed Al Adsani, Match Operations Specialist said, “The motivation for the teams is big; all the teams have had a break and will be ready. All four teams are very strong this season and so they all have a good chance of winning it.”

Mr Al Kuwari then reminded the assembled media that the Qatar Cup will be going on a tour of the country and that it was a great opportunity for the public to go and see it and be a part of a great footballing experience.

“The Trophy Tour is a chance for fans to have a photo taken next to the glimmering trophy, so come along. Everybody who lives in Qatar is welcome.”

Mr Khalifa Saleh Al Haroon, Executive Director of Marketing & Communications said at the end of the press conference how excited he was to be a part of his first ever Qatar Cup and that the QSL will be very active during the competition with regards to social media.

“Remember to check us out through our various social media channels. We will be running a number of competitions and events and we want the general public to get involved as much as possible. We will have some events in Souq Waqif, Al Wakrah, Al Khor and many of the malls.”

He then went on to say, “We will also be trying to engage the wider world, and show them that the people of Qatar are mad about football and hopefully they will get a small taste of the football spirit of the Qatari people.”

He added, “It is a big opportunity for families to be involved and participate. We try every year to improve and if anyone wants to make any suggestions, we welcome you.

He continued, “We want people around the world to associate football and Qatar in the same breathe, just like other big footballing countries.”

Mr Hani Ballan, the CEO of the Qatar Stars League finished the press conference by saying, “I want to congratulate everyone present here and also our friends from Sout Al Kaleej, I am very happy and proud to support everyone who was involved in making this tournament a reality.”

He went on to say, “This Cup is very important for the four teams, this cup is a big deal, we worked a lot to make the Cup even better this year. I want to thank the media too. Sout Al Khaleej also has done a great job in the past for us and we are happy to have them on board again. Thank you to all those who worked on the branding and behind the scenes for today’s press conference; we have made something beautiful and special for the country. Our target every day is to improve in all areas including this competition. I am confident that the League is doing a good job and I would like to thank the sponsors also who have supported us from day one and helped us right up until now.”

He concluded by saying, “We invite everyone to come and enjoy a few days of quality football, the Qatar Cup is for the people of Qatar and we are proud of our event. Thank you very much.”