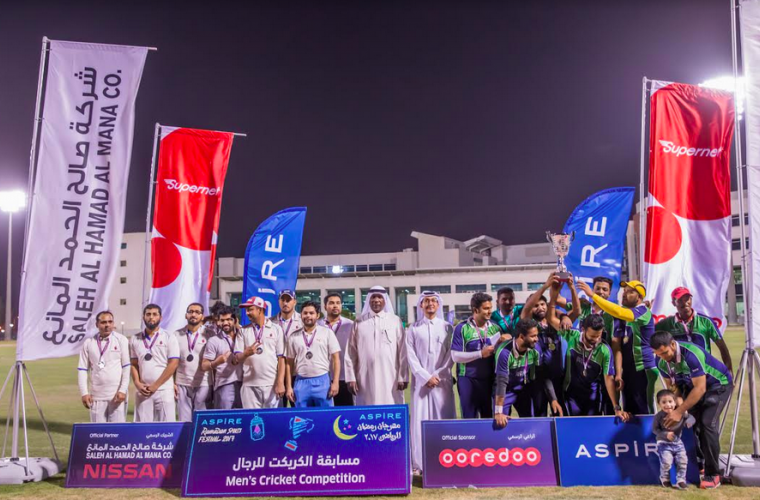 The cricket tournament, organised as part of Aspire Zone Foundation’s (AZF) Ramadan Sports Festival (RSF), drew to a close Saturday evening amidst great enthusiasm from the spectators. After three days of tough matches, Team Blasters remained undefeated for the second consecutive year as they overcame their strong opponents Mosanada.

Mr. Abdullah Aman Al Khater, Events Manager at AZF, Ms. Al Anoud Al Misnad, a member of the RSF organising committee and Mr. Ali Al Motawa, a representative from the events department at Ooredoo, attended the awarding ceremony, which was held on the warm-up track in Aspire Zone.

Mr. Abdullah Al Khater, Events Manager at AZF, praised the tournament saying: “The popularity of the cricket tournament last year made it an obvious choice for inclusion in this year’s Ramadan Sports Festival. We have once again seen a tremendous turnout from members of the Asian communities, with the number of participants and spectators growing year on year.”

This year’s tournament saw six teams comprising members of the South Asian expat community in Qatar battle it out for glory.Team Blasters and Team Mosanada reached the finals after overcoming their opponents, Team Aspire and Team Brothers respectively.

Despite the loss, Mohammed Zaker, Captain of the Aspire Cricket Club, was thrilled to have taken part in the competition, saying: “I’m grateful to Aspire Zone Foundation for organising a cricket tournament that will for sure help turn cricket into a recognised sport in Aspire Zone, on par in popularity with football.”

The Ladies Volleyball tournament kicks off with three exciting matches

Meanwhile, Aspire Zone kicked off the sixth annual Ladies’ Volleyball tournament, organised in collaboration with the Qatar Women's Sports Committee, on Saturday evening at the Ladies Sports Hall. Running until 7 June, a total of seven teams are taking part in this year’s tournament.

Team Aktor and Team Hyperspikers quickly emerged as winner of the first round of the group-stage competitions, taking on Team Volley Pearls and Team Godspeed. Team Lady Eagles’ match against opponents Al Rayyan, on the other hand, was quite tough as both refused to concede in the first two sets, until the former overturned the tables in the third set, resulting in a 2-1 win.

Commenting on her team’s participation, Jawaher Taher from Team Al Rayyan said: “We’re glad to be part of this volleyball tournament. This is still the first game of the group-stages, and we believe we still have a strong chance to win this tournament. This tournament gives us an opportunity, as professional volleyball players on the national team, to practice and evaluate our performance against other strong teams. The tournaments’ timings during the RSF are especially important because they encourage people to go out and play sports in Ramadan.”

Aspire Zone Foundation is once again collaborating with the Qatar Paralympic Committee to organise table tennis competitions for people with special needs, featuring competitions in three categories – for people with learning disabilities, as well as visual and hearing impairments.

Spectators are welcome to attend the competitions on Monday in the multipurpose hall in Aspire Dome to support and cheer for the contestants.

Football tournament to kick off 7 June

Aspire Zone will launch the highly-anticipated football tournament in the outdoor warm-up track on 7 June, which will run until the 14 June. The tournament will feature 16 teams organised into various groups, with each squad made up of 12 players. The team at the top of each group after the first round of games will qualify for the final stages of the competition.

Ramadan Sports Festival is an annual sporting event that runs for two weeks. Over 1,300 members from the local community are set to participate in 11 sports tournaments taking place across Aspire Zone’s world-class sporting facilities. This year’s festival is sponsored by Ooredoo and Saleh Al Hamad Al Mana Co.

The festival is an excellent example of the year-round programme of activities hosted by AZF designed to cater to all members of the community. Aspire Zone has become one of the most popular destinations for Qatar’s residents to take part in sporting activity as well as enjoy a wide range of cultural activities.