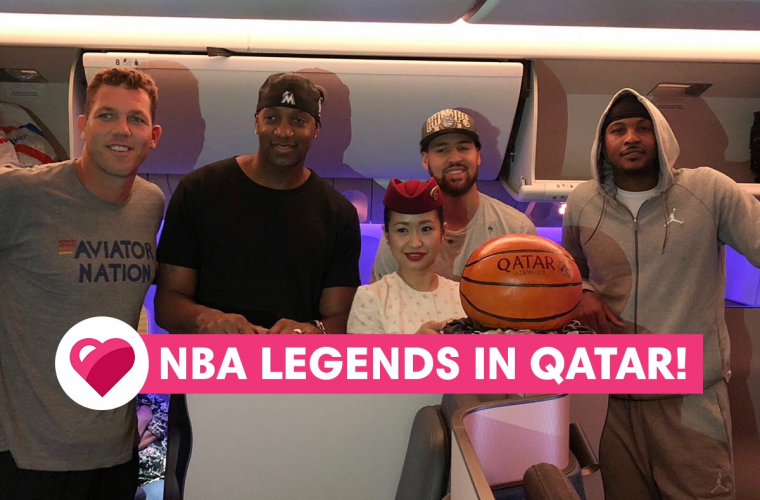 Qatar welcomes National Basketball Association's (NBA) world-famous legends who just landed in the country today to promote basketball and also to see how Qatar is getting ready for the World Cup 2022. The line-up of NBA legends, who have been invited especially by the Supreme Committee for Delivery and Legacy and the Qatar Olympic Committee, includes Klay Thompson (4-time all-star) from the Golden State Warriors and Carmelo Anthony (10-times NBA All-Star and an 6-time All-NBA Team member) from the Houston Rockets, along with former Tracy McGrady who is a former NBA superstar and Luke Walton, another former NBA star who now coaches the Los Angeles Lakers team.

During their tour of Qatar, the four NBA legends will take a tour of Khalifa Stadium, which is one of Qatar’s many World Cup 2022 stadiums and a well-known landmark of Doha, and will also visit Aspire Academy which is famous for his contributions to sports in the country.

Qatar Academy will host Anthony and Thompson for a day, while they are in Qatar, where the two of them will conduct a basketball workshop for the Academy’s students and give them suggestions and tips on how to improve their basketball skills.

As part of their visit, the four NBA legends will also meet up with students who go to the Qatar-based US universities of Northwestern, Carnegie Mellon, Texas A&M and Georgetown. They will also play a game with Qatar’s national women’s basketball team when they pop in at the Shafallah Centre. Now, that will be quite a match!

Souq Waqif and the Museum of Islamic Art are also on the agenda, and the NBA legends will get the chance to take in some of the sights and sounds of Qatar while enjoying the local traditions of hospitality and warmth that make this beautiful country the friendly and hospitable place that it is.

Are you a basketball fan? Which NBA teams do you support? Are you excited that some of the NBA legends are visiting Qatar? Let us know in our Comments section. Like and share the article. It keeps us going!