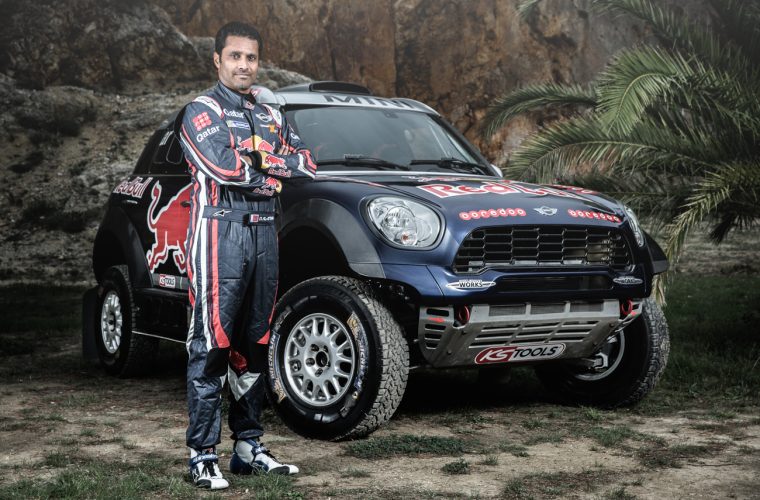 Former Dakar winner and Olympic medallist Nasser Al-Attiyah will continue his partnership with Red Bull next year to contest the 36th Dakar Rally in a MINI ALL4 Racing, run by the X-Raid team as part of Red Bull’s ‘Desert Wings’ programme.

The Qatari finished on the Dakar podium last year with the four-wheel drive MINI ALL4 Racing, despite a last-minute decision to contest the event that meant he embarked on the world’s most arduous rally with no testing.

This time, the 43-year-old Red Bull athlete has his sights firmly set on another victory, together with his French co-driver Mathieu Baumel.

“I am very, very happy to be doing Dakar with Red Bull in the MINI,” said Al-Attiyah, who last weekend clinched the WRC2 title on the World Rally Championship in Wales. “I previously won the Dakar in 2011, and already that feels like too long! The Dakar is one of the most fascinating and complex races you can do in the world: one of the last really big adventures. That is why it is so nice with me to return with all my friends and partners at the Qatar Rally Team. The MINI ALL4 Racing is very well suited to the terrain and of course we will be aiming for victory even though the opposition is very strong. But Dakar is actually not just about speed. It is about the whole package, which you have to get right, and that includes having the right preparation and experience.”

Al-Attiyah has already embarked on his testing programme with the Red Bull-liveried MINI ALL4 Racing and Baumel, who will co-drive Al-Attiyah for the first time in South America. So far, things are looking positive and the new duo know each other very well, having already won the Sealine Cross Country Rally in Qatar together in the MINI earlier this year, as well as the OiLibya Rallye du Maroc. In total, Al-Attiyah and Baumel have triumphed in three out of the six rallies they have contested together to date, as well as claiming second place twice.

“Mathieu is a very nice guy with a lot of experience,” said Al-Attiyah. “He’s already quite good at Arabic, but I know that when he suddenly starts speaking French inside the car, it’s probably time to slow down!”

Their pace notes, however, are normally in English…

Al-Attiyah contested his first Dakar in 2004 and has been on the podium three times. Not only is he a Production Car World Rally Champion, WRC2 World Rally Champion, FIA Cross Country Champion and multiple Middle East Rally Champion, but he also won a bronze medal for skeet shooting at the 2012 London Olympics. With five Olympic Games already behind him, and every intention to contest a sixth in Rio de Janeiro in 2016, Al Attiyah is one of the longest serving Olympians in the world: another record to add to his collection. Next weekend, he contests the Dubai International Rally in pursuit of one more target: his 10th Middle East title.

Baumel, 38, first tackled the Dakar in 2005 and is also a two-time winner of the FIA World Cup for Cross Country Rallies, giving him vital experience of the complex navigation that awaits.

The biggest challenge of all though remains the epic Dakar itself, which next year will take in approximately 9,000 kilometres through mountains, sand and gravel, starting and finishing in the Argentine capital of Buenos Aires. The route also runs through Bolivia and Chile, with 13 stages from January 4-17.

“Until you get there, it’s actually hard to explain what a big challenge the Dakar is,” concluded Al-Attiyah. “You really have to be prepared for everything. You need a strong car, a calm mind, and of course plenty of energy. So it’s just as well I have a partner that gives me wings! Dakar is one of the most amazing races in the world. I’m already looking forward to it.”

Stay up-to-date with Nasser and Mathieu at redbull.com/dakar, as they look to pick up some serious speed in motorsport’s ultimate test of endurance racing.