Nasser Al Attiyah takes on the BAJA 1000 in Mexico for the first time! 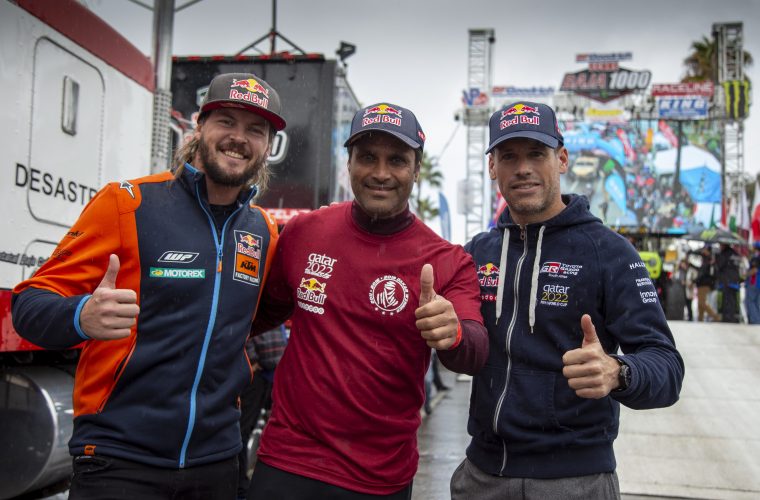 North America’s most famous off-road race began Saturday, November 23rd just outside of Ensenada, Mexico, – a day late thanks to torrential rains that are sure to have muddied up the course. We’ve got few superstar racers pairing up to tackle the 1,287-kilometer course through Baja’s rocky roads and sandy washes.

An exciting last-minute entry from two legendary off-road racers coming in from afar: reigning Dakar Rally champions, Qatari Nasser Al-Attiyah (QAT) and Australian Toby Price (AUS) , will also be hopping in a Trophy Truck together for the first time. While the Baja 1000’s all-day, all-night style of racing will be a change for the cross-country rally experts, their driving skills will make them a force to be reckoned with. Toby will be joined by co-driver Dustin Hellstrom, and Al-Attiyah of course by Mathieu Baumel. The pair are supported by Baja racing legend Jesse Jones.

“I am so excited to do Baja 1000 – I’ve been dreaming of doing this race for a long time! With two Dakar champions, I think it will be really a nice feeling to race together. I have never driven a trophy truck, so we need to test the truck. It won’t be easy at the beginning, but I think we can do a good job, and we have a good strategy."– Nasser Al-Attiyah.

Nasser and Toby have already agreed on one strategy – Toby will open the course on roads that he already knows, then plans on handing the truck over to superstar driver Nasser with plenty of life left in it for the race to the finish.

Andy McMillin (US) and Bryce Menzies (US) have always been racing against each other – but for the 2020 Baja 1000, they’re going to be on the same team – piloting the same Mason Motorsports Trophy Truck as fast as they can during this iconic off-road race – each taking a turn (or two) at the wheel as the truck races non-stop, day and night, over 1,287 kilometers. With five Baja 1000 wins to his name, Andy knows what he’s doing – and Bryce has proven himself with three Baja 500 championships, making this duo very dangerous!

Pre-running – where the race teams scout the course – began in November. The Trophy Truck class will begin racing around 10:30 AM PST on Friday, November 22 – and official results are expected around 5 AM PST on Sunday, November 24th.