Nakagami fastest as the sun sets on Day 2 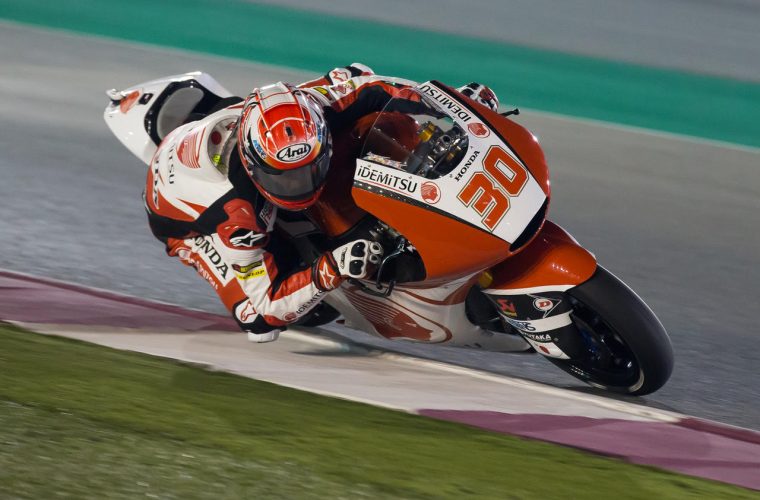 After a Day 1 that saw zero progress for the intermediate class as rain stopped play, Day 2 of the Official Test at Losail International Circuit in Qatar got underway with dry skies and good temperatures; the grid ready to get to work. The three sessions saw Tom Lüthi (CarXpert Interwetten) go fastest first from Franco Morbidelli (Estrella Galicia 0,0 Marc VDS), with the EG0,0 Marc VDS rider hitting back in Session 2. The third outing of the day was topped by Takaaki Nakagami (Idemitsu Honda Team Asia) – but with both Morbidelli and teammate Alex Marquez in close company at the top once again.

Overall results saw Nakagami’s best of 2:00.187 take P1, just 0.053 ahead of Morbidelli followed by fastest in Jerez Marquez in P3. Marquez also suffered a small crash but made it back round to the pits after picking the bike up, ending the day on a 2:00.427. Hafizh Syahrin (Petronas Raceline Malaysia) had an impressive Day 2 to end up fourth on combined times – 0.584 off Nakagami on a 2:00.771.

Red Bull KTM Ajo’s Miguel Oliveira was another who impressed once again as the new KTM chassis debuts in Moto2™, going fifth fastest with a 2:00.861 and a consistent force to be reckoned with near the top. Teammate and reigning Moto3™ World Champion Brad Binder, who is coming back from a broken arm, ended the second day a couple of seconds adrift as he continues to put in the laps.

Kiefer Racing’s Danny Kent was the fastest Suter in P9, with fellow Suter entrants Dynavolt Intact GP in close pursuit with Marcel Schrötter in P11. Axel Pons (RW Racing GP) split the two Suter machines in tenth, putting in a 2:01.252 in the second session as his fastest of the day.

The final day of preseason for the intermediate class gets underway at 16:30 (GMT +3) on Sunday at Losail - before the racing starts next weekend.